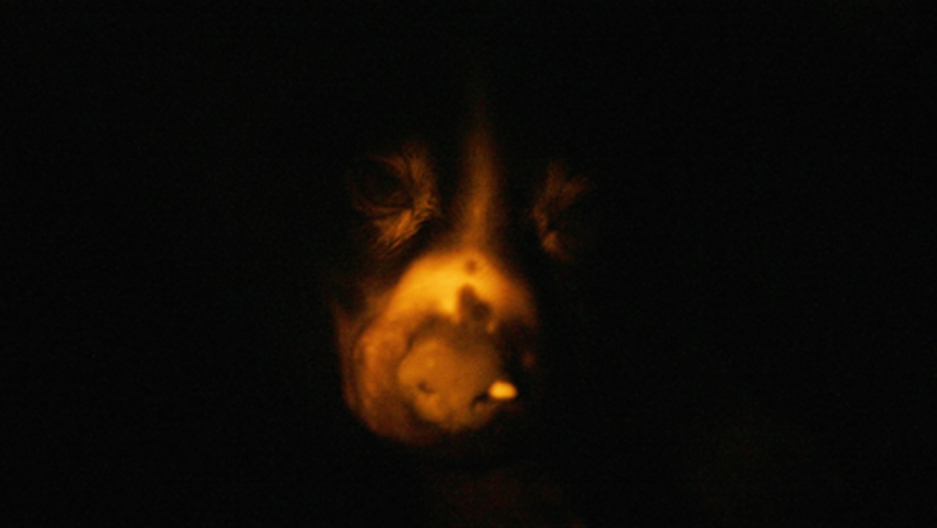 A cloned fluorescent puppy, a three-month-old beagle, glowing in the dark under ultra-violet light at Seoul National University's College of Veterinary Medicine in Seoul, May 13, 2009.
Credit: Jo Yong hak
Share

The headline alone is pretty great: "Scientists claim to have created glowing dog."

And the news blurb in its entirety doesn't disappoint:

SEOUL, July 27 (Yonhap) — South Korean scientists said Wednesday that they have created a glowing dog using a cloning technique that could help find cures for human diseases such as Alzheimer's and Parkinson's.

A research team from Seoul National University (SNU) said the genetically modified female beagle, born in 2009, has been found to glow fluorescent green under ultraviolet light if given a doxycycline antibiotic.

You likely have many questions. Let us start at (or near) the beginning.

In 2005, South Korean researchers first cloned a dog. They named that dog Snuppy.

A combination photo shows a cloned fluorescent puppy, a three-month-old beagle, glowing in the dark under ultra-violet light (top) and under daylight (bottom) at Seoul National University's College of Veterinary Medicine in Seoul May 13, 2009. (Reuters/Jo Yong-Hak/South Korea Scitech Animals Society)

Snuppy looks a lot like his Afghan hound dad.

But, however inefficient, that technology was groundbreaking and was used again to make Tegon in 2009.

According to New Scientist, five beagles were cloned in 2009 — the first was named Ruppy, short for Ruby Puppy – that all have the ability to glow in the dark.

So, Tegon can glow if given a certain antibiotic, and while this leap in logic is slightly confounding, it appears that this discovery may allow doctors to give her other things that, while they may not make her glow, could give her fake Alzheimer's.

Lead researcher Lee Byeong-chun has told the media: "The creation of Tegon opens new horizons since the gene injected to make the dog glow can be substituted with genes that trigger fatal human diseases."

What Lee is referring to appears to be the fact that the dogs were genetically engineered in 2009 to produce a fluorescent protein that glows red under ultraviolet light.

According to New Scientist, here's how they went about it: Researchers cloned cells that express a red fluorescent gene produced by sea anemones. They then infected the nucleus of some dog cells with a virus that had the fluorescent gene in it. They put that nucleus in a dog's egg cell and implanted that embryo into a dog momma.

It's unclear how the flourescent protein relates to the antibiotic they gave to Tegon, but somehow we now have a glowing dog.

I'm not sure where Snuppy is at this moment or whether he is glowing, but it is quite possible Tegon got the short end of the stick — should Snuppy have somehow managed to escape being experimented on with artificial human illnesses.

There are, according to scientists, 268 illnesses that humans and dogs have in common. Dogs are already being used as models for narcolepsy, certain cancers and blindness.

Also, and this a salient detail, Tegon's ability to glow can be turned on or off depending on whether the antibiotic is added to her food.

So, while Tegon may develop dementia, at least she doesn't have to glow all the time.

Oh, and while this is hitting the wires now, it appears to have been news back in 2009, when these four "Ruppies" were born. The New Scientist had it then.

What would you have named her? Give us your answers and we'll post the best ones on Facebook