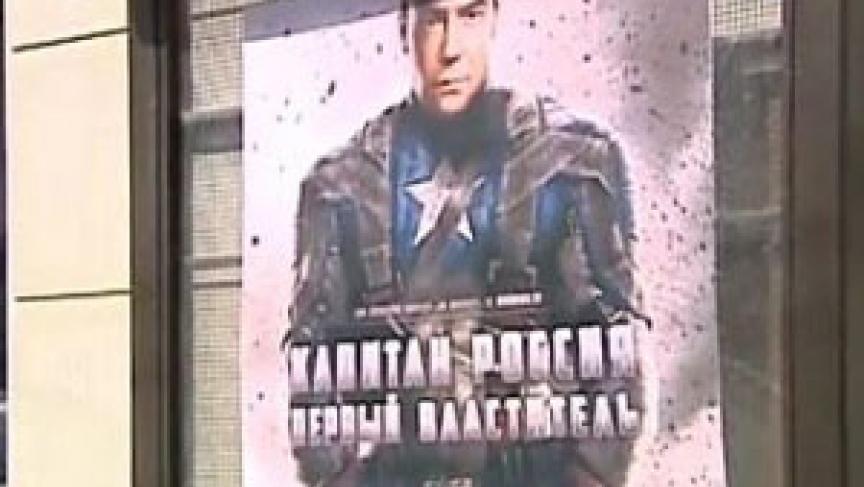 A poster of Russian President Dmitry Medvedev dressed as Captain America in Moscow.

A "faux grass roots" presidential campaign has cropped up in Russia this past week, reports Julia Iofee, Foreign Policy Magazine's Moscow correspondent on PRI's The World. The campaign plays off of the personas of the Russian presidential race's two main contenders: incumbent President Dmitry Medvedev and Prime Minister Vladimir Putin.

In Russia, Iofee says, Putin is a sex symbol -- a man of power, a leader. Posters across Moscow depict Putin as a James Bond type character with a Russian tagline that roughly translates to "He's got your back." At the same time, a YouTube video from "Putin's Army" calls upon young, smart sexy Russian women to "tear it up" for Putin. To say "tear it up" in Russian slang is a phrase that shows loyalty and protection. But in this video, the campaigners ask girls what they are willing to tear up (or in some cases, tear off) to show their love for Putin. The girls in the video suggest lipstick-marked tank tops.

This image of Putin contrasts heavily with that of Medvedev. Seen as a kind of wimpy nerd in Russia, Medvedev's posters portray the Russian president as "Captain Russia, the First Ruler," holding his iconic iPad. Iofee notes there is a common Russian joke in which Medvedev prefers to Tweet and play Angry Birds on his iPad rather than lead his country.

Russia's 2012 presidential election will be held in March.