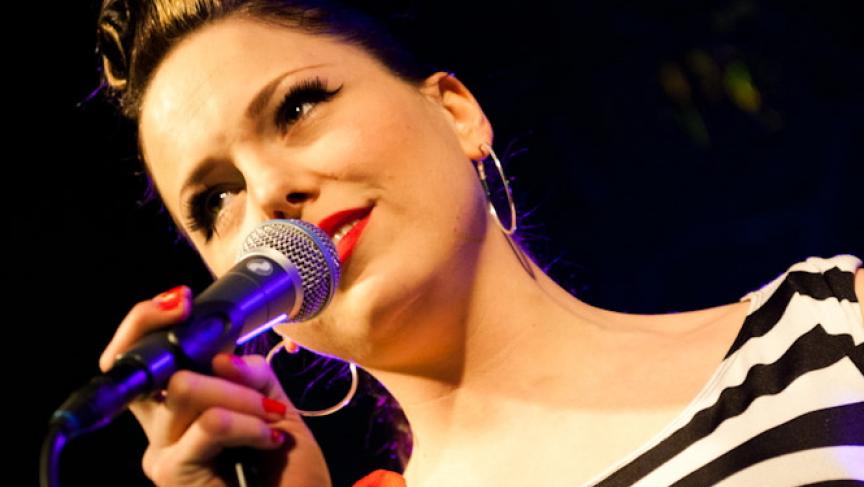 Story by PRI's The World. For more, listen to the audio above.

At age 13, Imelda May snagged one of her brother's audiocassettes to try out her new tape player. On the tape were the voices of Buddy Holly, Eddie Cochran and Gene Vincent. "I never heard anything like it and I thought it was absolutely wild, and excitin' and frightenin' and everything all at the same time," says May. "So rockabilly is what started me onto different music, if you like, and it kind of opened a whole other world of music to me that wasn't necessarily in the charts."

May grew up in a two-bedroom house shared by her seven family members, and at the heart of the house was a record player. She recalls her mom playing classics like Dean Martin and Judy Garland, her father enjoying jazz musicians like Glenn Miller, and her siblings listening to acts from Joe Cocker to David Bowie. "So I was brought up with a fantastic mixture of music, and then loads of traditional Irish in there as well," May recollects. "So, I couldn't have asked for any better, to be honest."

She began performing in the Dublin club scene at age 16, and started her professional career in 2003. Over the course of that career, May has opened for performers including Elvis Costello and Elton John, and has toured with musicians like Jeff Beck, Jules Holland and Meat Loaf. This summer, she is performing with her long-time idol, Wanda Jackson, the queen of rockabilly.

While Elvis had his pompadour, May's signature look is a large curl balanced on the top of her head, with a streak of blonde running through it. She says she perfected the curl during her early days touring: "It's a finger roll. I'm not a high maintenance girl. I've been given 20 years now of traveling all over the place, and all kinds of little dingy great clubs, and trying to get ready in the toilet. […] But I have to say that I am glad that things have gone well -- that I now have a dressing room with a mirror, and some lights, and a sink."