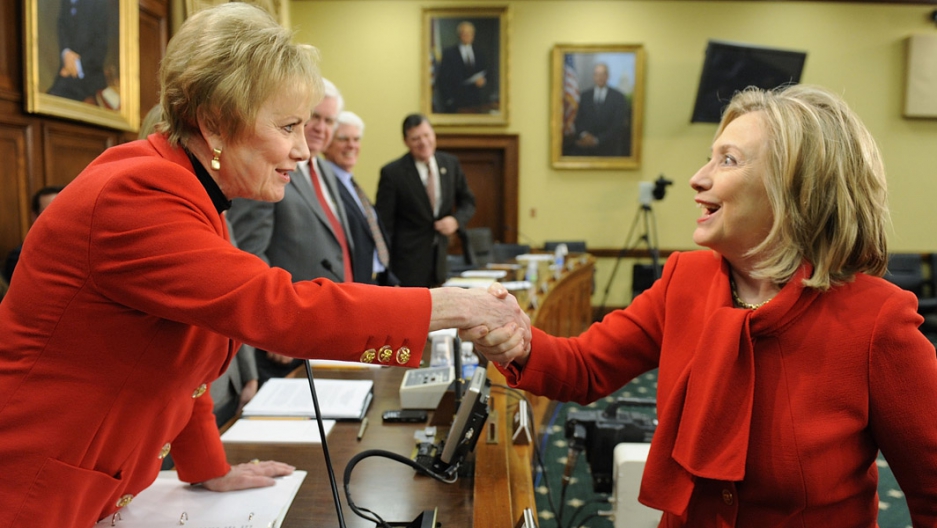 U.S. Secretary of State Hillary Clinton greets subcommittee chairman Rep. Kay Granger (R-TX) as she arrives for testimony about the State Department's FY2012 budget during a hearing of the State, Foreign Operations and Related Programs Subcommittee of the House Appropriations Committee in March 2011. Secretary Clinton has recently warned that proposed budget cuts would have a negative effect on U.S. national security policy.
Credit: Jonathan Ernst
Share

All the attention this week -- for good reason -- has been on the showdown in Washington on whether the Obama administration and Congress can reach an agreement on raising the debt ceiling by an Aug. 2 deadline. But Tuesday, the House Appropriations State and Foreign Operations Subcommittee released its FY2012 appropriations bill, and it didn't contain much good news for global health funding, particularly the Global Health Initiative (GHI).

Overall, according to an analysis by the Global Health Technology Coalition (GHTC), the bilateral assistance account is cut by $3.5 billion from FY2010 levels, and is $4.8 billion below the FY2012 President’s request.

For GHI, the House panel earmarked $7.1 billion for FY2012, which is $1.6 billion less than Obama's request. Other funding for GHI is included in other accounts.

This is the first step in the budget process. The subcommittee will mark up its bill Wednesday, but analysts do not expect the level of funding to change much at this stage. The Senate will introduce its own bill, and global health advocates expect that it will include high amounts of funding for GHI. But, like almost all federal programs, funding for global health is bound to be affected by the ongoing budget crisis.

Global health advocates are not optimistic. "Global health funding in the House could even get worse with certain amendments," said Ashley Bennett, Senior Program Associate at GHTC. "The Senate will be more friendly toward global health, but what is happening today is alarming because global health programs (in the House and Senate) had been such a bipartisan issue in the past, and these are huge cuts."

Other cuts in health programs included a reduction of $729 million from last year's funding of multilateral assistance, which includes the World Bank and the Global Environment Facility. And for US Agency for International Development's operations, the bill contains $1.04 billion, which is a cut of $488 million from last year's funding. The bill also halts new hiring at USAID.