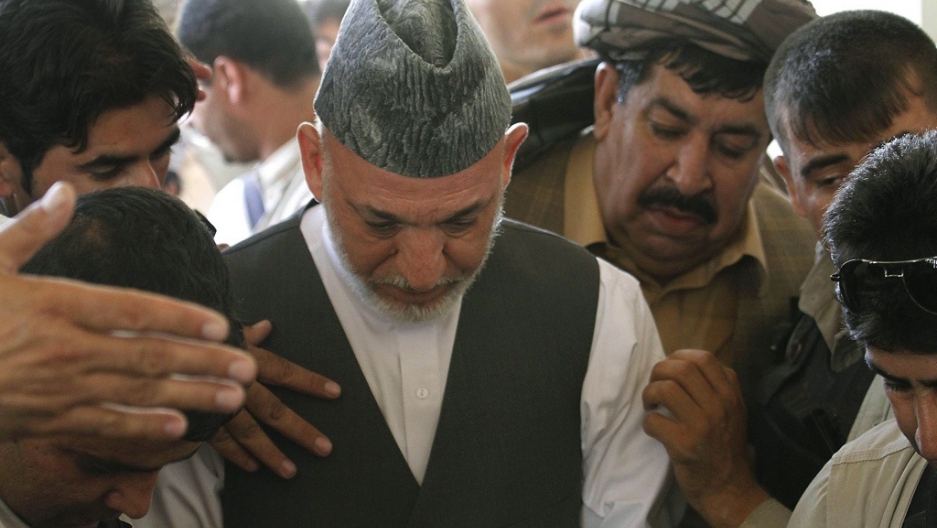 Ghulam Haider Hamidi was not your typical Afghan official. For one thing, he had a U.S. passport, and had given up a comfortable life in Virginia to return to his native Afghanistan, where he became the mayor of one of the most dangerous cities on earth in 2007.

So his death at the hands of a suicide bomber in Kandahar on Wednesday was more than just another senseless tragedy in a country that specializes in them. It was a bitter commentary on how Afghanistan treats its champions.

The assassination of Kandahar’s mayor is the latest in a string of high-profile killings that has put paid to any notion that Afghanistan is transitioning to stability and peace.

The president’s half-brother, the controversial Ahmed Wali Karzai, was shot to death in Kandahar just two weeks ago; a senior advisor to Hamid Karzai was ambushed in his Kabul home on July 17, and was killed along with a member of parliament and their bodyguards.

The deaths have sent shivers throughout Afghan officialdom; no one feels safe. According to Afghan journalists covering the legislature, lawmakers are barely showing up for sessions these days, out of fear that they will be targeted.

But the international community, particularly the United States, is proceeding with a much-heralded handover of security responsibility to Afghans, despite dire warnings from Afghan and international officials that the situation is likely to deteriorate even further.

Hamidi and his family knew from the beginning that he would most likely be killed.

He was targeted several times, and narrowly escaped an attack on his car in 2008. But he persisted in his thankless task of trying to run a city where assassinations were a daily occurrence, where getting the trash picked up was akin to arranging a major battle, and where his power to effect change was severely limited by tribal politics, interference from the center, and the international presence.

The mayor was preceded in Kandahar by his daughter, Rangina, who returned to Afghanistan after the fall of the Taliban with a degree from the University of Virginia.

Rangina had spent most of her life as a “normal” American kid, but always felt the pull of her country of birth. She came back to Kandahar with an Afghan organization, Afghans for Civil Society, which was established by Qayum Karzai, another of the president’s siblings. On her own she began Kandahar Treasure, an organization that helps women earn a livelihood through handicrafts. She was recognized as a CNN “Hero” in 2007. She has married an Afghan colleague and now lives in Kandahar with her husband and daughter.

It was in part Rangina’s influence that brought Hamidi to Kandahar. In 2005 he came for a visit, and was asked by local officials to accept the post of mayor.

Hamidi and his family were close to the Karzais, which earned them few friends among some of Kandahar’s disgruntled tribes. Hamidi himself, given his long absence from Afghanistan, did not have deep roots in the convoluted system of rivalries and alliances that made up Kandahar’s delicate balance of power.

But his death may be the final push that will send Kandahar tumbling into chaos. The power vacuum created in the wake of Ahmed Wali Karzai’s death has now expanded.

(GlobalPost in Kabul: The mixed legacy of Gen. David Petraeus)

The new U.S. ambassador to Afghanistan, Ryan Crocker, insisted that this latest assassination would not weaken the fight against the insurgency.

“We condemn in the strongest possible terms the assassination of another senior Afghan government official, Kandahar Mayor Ghulam Haider Hamidi,” said the ambassador, in a statement released by the U.S. Embassy. “Our condolences are with his family and with the government and people of Afghanistan. His death only strengthens our determination to work with our Afghan friends and allies to ensure that the proponents of terrorism and violence never again prevail in this country.”

But the words sound a bit hollow given the mounting death toll and the growing desperation of the Afghan people. Last month saw more Afghans killed than in any other period during the decade-long war.

The situation, rather than reflecting the “fragile but reversible” gains constantly trumpeted by the U.S. military, seems to be spinning rapidly out of control.

Just over a week ago, Jan Mohammad Khan, a close advisor to the president was shot in his home along with a prominent Member of Parliament.

The MP, Mohammad Hashim Watanwal, bore the turbulent history of Afghanistan in his blood. A fierce-looking Pashtun from Uruzgan province, he spoke Russian fluently thanks to his Communist past and a Soviet-sponsored education. He had emigrated to Scandinavia during the chaotic civil war period, and had a Swedish passport. He had returned to Afghanistan to work for his country, and was elected to Parliament from Uruzgan in 2005, and again in the badly flawed elections of 2010.

Now he is dead at the hands of assassins, another sadly typical ending for Afghan politicians.

(GlobalPost in Kabul: Why is Pakistan bombing Afghanistan?)

But the steadily deteriorating situation, which is causing concern and even panic in some quarters, seems not to have penetrated the international sphere. The handover of security responsibility to Afghans is proceeding, with two areas beginning the formal process over the past few weeks.

In Helmand, Kandahar’s neighboring province and the scene of some of the worst fighting of the war, a ceremony was held on July 20 to mark the transition.

Dr. Ashraf Ghani Ahmadzai, who heads the Transition Commission and who also spent decades in the United States, spoke eloquently of the handover.

“This process cannot be held back,” he said. “Instead, it will proceed steadily and over the next three years all areas of Helmand will be transferred to Afghan forces. The Afghan forces are capable of handling security by themselves.”

In the audience was Helmand Governor Gulab Mangal, who has survived multiple assassination attempts in the past few months alone, most recently two weeks ago, as he traveled to the funeral of the president’s brother.

On July 17, Bamyan province was transferred from international responsibility to Afghan control; Bamian, a normally peaceful region, had only 200 soldiers from New Zealand to keep the peace. But even this tiny gem in the center of the country has had its share of problems. A revered local leader, Provincial Council head Jawad Zahak, was abducted and killed on the road between Bamyan and the capital in early June.

Local leaders warn that the Taliban are making inroads even in Bamyan, with a view to opening up the transit routes from the volatile south to the more stable north.

“Bamian links the southern parts of the country with the north,” explained political analyst Sadiq Aliyar. “The Taliban want to access the northern provinces through Bamian. For the past ten years Bamian has been safe, but now the Taliban will try and destabilize it, to make it as insecure as the rest of the country.”
With the mayhem growing all around, many are asking what will happen next.

Rory Stewart, a British lawmaker who spent years living and working in Afghanistan, raised the question in a speech he gave in Edinburgh earlier this month.

Stewart then catalogues the failure of the international intervention in Afghanistan: the cascading billions that have spawned corruption and “co-opted almost everybody,” robbing the Afghan government of the power to set its own priorities and turning development specialists into willing partners in hoodwinking the public.

Stewart dismisses worries that Afghanistan poses an “existential threat” to the international community. He ridicules the “litany of astonishing optimism” promoted by a succession of international leaders who have heralded every year since 2004 as “the decisive year” and have promised what they could not possibly deliver.

This blind faith in the future that the international community professes to espouse has undermined all efforts to help Afghanistan, he warned. By ignoring the dangers, we make it less likely that we can avoid them.

“The worst thing we have done in Afghanistan is this idea that failure is not an option,” he said. “ It makes failure invisible, inconceivable, and inevitable.”