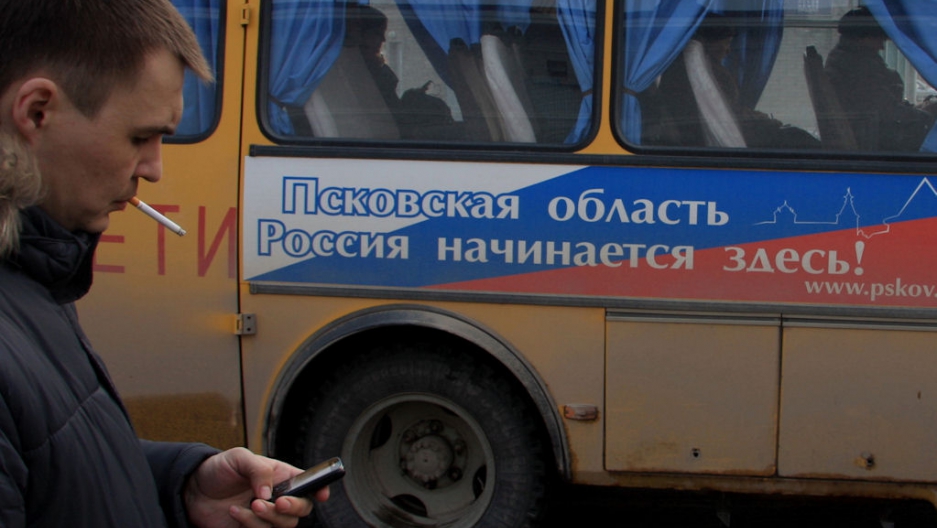 PSKOV, Russia ― A few miles after the tiny Russian hamlet of Molodoshkovo the unpaved road ends in a muddy path. Though it has only four inhabitants ― three of whom are over 75 ― there are 11 houses in Molodoshkovo. There are also the remains of several more.

From Portugal to Japan, demographic stagnation is a familiar story of developed countries, but relentless rural depopulation is particularly acute in Russia. The region of Pskov, home of Molodoshkovo, is one of the areas most affected.

According to preliminary data from the country’s 2010 census, Pskov’s population shrank by almost a million souls over the last eight years ― an 11.5 percent drop. The population in the country as a whole dropped just 1.6 percent.

In a list of Russia’s 83 regions ranked according to demographic loss, Pskov comes third behind Magadan, former center of the Soviet Union's forced labor camps in the country’s far northeast, and the north Caucasian republic of Ingushetia, blighted by decades of violence.

Pskov, in contrast, is on Russia’s western border with the European Union.

And ― unlike Magadan or Ingushetia ― this is ancient Russian land. The regional capital, also called Pskov, was founded in 903 and is home to exquisite Byzantine frescoes. It is there that Russia’s last czar signed his abdication in 1917.

In a nod not only to its geographic position, but also to its long history, the regional tourist department has devised a slogan that is plastered across city buses, “Pskov Region: Russia Starts Here!”

Little public transport passes through Molodoshkovo, which is connected to the district center, a town 13 miles away, by a bus that runs once a month. But the village was not always half-deserted. A photograph taken at the beginning of the 20th century ― when Nicholas II was czar and Lenin was scribbling social democratic tracts in a London garret ― shows Molodoshkovo on a festival day. There are more than 16 people in the picture, young and old, and there is a two-story house in the background.

Today, the village’s seven deserted houses have been looted of anything of value. Torn pictures, empty jars and old farm tools lie amid the rubbish scattered on their floors, while filthy white drapes billow in the breeze.

World War II dealt the first blow to the population in this part of Russia. Of the 1.5 million people living in the region before the war, only 500,000 remained when the Nazis retreated toward Germany in 1944. Pskov was the last Soviet city to be liberated from Nazi occupation.

But the depopulation of Russia as a whole began in earnest during the disintegration of communism ― in 1992 more people died than were born for the first time since World War II. Ever since, numerous factors have led to a precipitous decline in the rural population. The prevalence of chronic disease, poverty (23 million Russians live on less than $231 a month), high rates of violence and the abuse of alcohol and tobacco push up mortality rates, while birth rates remain low. The life expectancy for Russian males is 61.8 years, compared with 74.2 years for females.

In rural areas the implosion of the Soviet planned economy in the early 1990s caused the collapse of the agricultural system on which people depended for a living and made internal migration to the cities easier and increasingly desirable. The closure of schools and other public services has accelerated the outflow.

A source close to Pskov’s governor, who requested anonymity to speak freely, said that this situation was more or less typical for Russia because, while the Soviet Union could force people to work in certain places, modern Russia can’t do that.

“People like to live in a ‘modern’ way ― sit in front of computers, go to supermarkets, receive a salary and have fun with it ― they are not interested in physical labor.”

He pointed to the growth of St. Petersburg. “We are not dying [in Pskov region] because everything is terrible, but because the grass is greener on the other side of the field.”

Former agricultural glories are visible in Vyazi, a village near Molodoshkovo, where rusty grain towers stand next to a large, empty concrete notice board from the old collective farm. It is labelled “our achievements.”

Nina Antonovna lives in Baranovo, a few miles from Molodoshkovo. She said Baranovo ― with its current population of three adults and half a dozen goats ― was more typical of the region’s decline than Molodoshkovo.

Fifty years ago Baranovo had 12 houses and several families with children, said Antonovna, who was born in the village and is now in her 80s. She recalled the Nazi occupation of the area during the Second World War: a German soldier who gave her candies and the nocturnal visits of Russian partisans.

Her husband, Nikolai Antonov, said his father had lived in the nearby hamlet of Timnovo, which is now accessible only by foot or 4x4. During his childhood, Antonov said, Timnovo had more than 50 people living in it.

The last resident of Timnovo, Maria Ivanovna, died on New Year’s Day 2011 and a team of people struggled to get her body, by tractor, to the cemetery through deep snow.

Few rural settlements in Russia do not have empty houses and there are about 6,000 “ghost villages” ― like Timnovo, without a single resident ― across the country.

The couple complained that land ownership rights are irretrievably muddled due to large numbers of people dying and leaving permanently for cities ― to such an extent that legal complications deter people looking to move the other way.

Many characterize Russia’s demographic problems as a crisis. In an April report, the Berlin Institute for Population and Development predicted that Russia’s population will fall by another 24 million people before 2050 ― making it the world’s 14th most populous state, one place above Vietnam.

Depopulation has been a charged political issue since the fall of Soviet Union ― Boris Yeltsin once faced a possible impeachment charge for presiding over the “genocide” of the Russian people ― and both Prime Minister Vladimir Putin and President Dmitry Medvedev have spoken out on the issue.

In his April 20 annual address to Russia’s parliament, Putin said that 1.5 trillion rubles ($52.5 billion) had been allocated to “demographic projects.”

Nikolai Petrov, a scholar at Moscow’s Carnegie Center, however, said that the government, in offering financial incentives for mothers as a primary means of encouraging growth, was not addressing root causes.

Those around Putin, he said, have misinterpreted a demographic “echo” of the baby boom as “the result of their wonderful demographic politics.”

Today, as one part of a drive to stimulate development, Pskov’s administration is looking to make the area into a magnet for tourism.

Ivan Tsetsersky, the city’s mayor, has tried to turn what the city lacks into an asset. “We don’t have heavy industry — or chemical industry,” he said.

What the region does have is rural vistas speckled with remnants of imperial Russia. Pskov was once the playground of the czarist elite from St. Petersburg, who built hundreds of extravagant country houses. Russia’s most famous poet, Alexander Pushkin, had his estate here ― to which he was banished for subversive poetry. In villages across the region, the ruins of imperial estates and churches dwarf modern houses of cheap, gray bricks or wood. Glimpses of once enormous landscaped gardens are preserved in alleys of trees, scummy ponds and fountains which haven’t worked for decades.

Perhaps Pskov’s emptiness can bring people back ― at least for a long weekend.