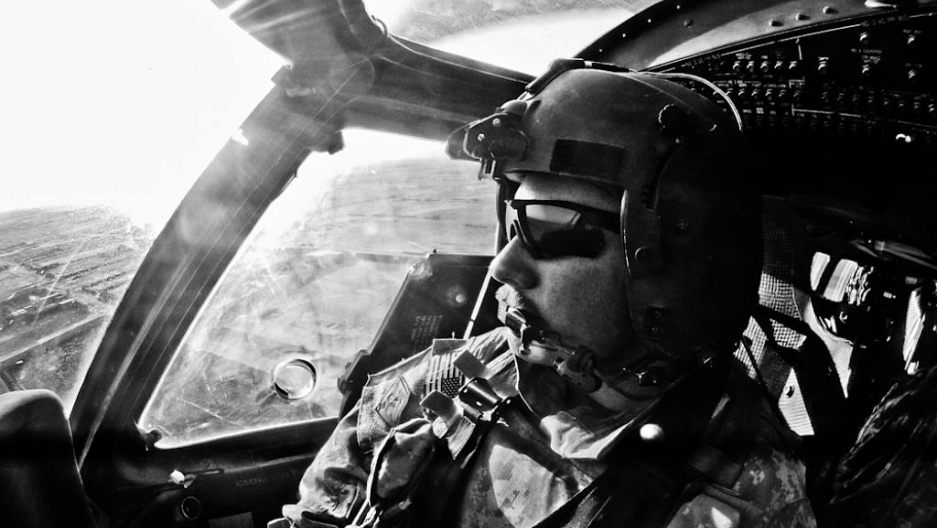 ZHARI, Afghanistan — There are signs on the bases here that instruct soldiers to keep their tourniquets in their right shoulder pocket. Should a soldier need a tourniquet, that is likely to be the only pocket they have left.

The sign explains, "Unfortunately limbs being lost by IEDs are the left arm, and both legs."

But it is also due to the speed and skill of Army helicopter Medevac teams.

"I hate the smell of this helicopter," said Staff Sgt. Stephon Flynn, a flight medic with Charlie Co., 1/52 Aviation. "When you wash the blood out and you smell all the iron — it gets in your clothes and you smell it while you're eating."

Minutes after returning from a Medevac mission and having the blood hosed out of Flynn's helicopter by the base fire department, another call comes in.

The bird passes over a concrete blast wall and a collection of buildings that I suddenly recognize from a foot patrol during an embed the week before. We touch down, and Flynn dashes off into the whipping dust. Minutes tick by. I know what is going to happen before it does.

A soldier I remember from the patrol is brought in on a stretcher. He is missing his left foot and his right leg is shattered, his one remaining boot flopped over at a lurid angle. His left arm is gone below the elbow, and he holds the gauze-wrapped stump in the air as the medics slide the stretcher into the roaring helicopter.

His expression is one of resignation and exhaustion. I never learned his name, and he wouldn't want it printed anyway. During the patrol he complained to me that Americans consume news about the war the same way they consume action movies and pornography.

The bird jerks into the air and rockets across Zhari's plains. It is almost dark and a few stars shine in the deepening blue. A trickle of blood wanders toward my feet.

Flynn works furiously rigging up equipment to monitor his patient's vital signs, and at the same time he must keep his patient awake at any cost. He rubs his knuckles against the young soldier's sternum, causing him to wince in pain under his oxygen mask.

The lanky Minnesotan medic solemnly described losing his first patient, a soldier injured by an IED.

"The medics on the ground told me he was alert and stable, and I was lulled into a false sense of security," he said. "He closed his eyes and was breathing normally while I hooked up my instruments, so I let him be for a moment. Then there seemed to be something wrong with the monitor, so I checked his pulse: none."

Flynn performed CPR on the soldier for the rest of the flight, but to no avail.

"We lost him, couldn't get him back," Flynn said mournfully. "A sternum rub is probably the most traumatic thing I can do to these guys, but when you go to sleep your body stops fighting, stops compensating for the injury."

All of Flynn's American patients and the most seriously wounded Afghan patients are transported to Kandahar Airfield's Role 3 Clinic. Afghan soldiers and civilians who are not in immediate danger of losing life, limb or eyesight are taken to the Afghan-run hospital at Camp Hero in Kandahar.

Again the helicopter has to be hosed out, and the fire department at Forward Operating Base Wilson is waiting when they land. Even with the high-pressure hose, Flynn still has to scrub the dried blood.

After an hour or so of the Medevac crew lazily playing golf on an Xbox donated by the United Services Organization, the radio squawks again: MEDEVAC MEDEVAC MEDEVAC. A virtual Tiger Woods looks forlornly around the green as the Black Hawks roar to life on the gravel helipad.

The helicopter banks hard left, streaking sideways over green farmland. Through the left door, a huge armored vehicle lies on its side next to a 10-foot wide crater. Love and Grove land right in the road, as close as they can get to the destroyed truck.

The first soldier into the bird is walking, horror-struck and clutching his arm. He is wearing a gunner's harness. A gunner is the most exposed person in a vehicle and it's incredible he emerged from the truck in one piece.

Next comes a soldier on a stretcher, ashen and exhausted, but whole. He won't open his eyes but grips the gunner's hand tightly the whole flight. The third soldier in the bird I am sure is dead.

His bare foot is the foot of a corpse, bloodless wounds packed with dirt. But he chokes and spits up blood. He is barely conscious but clearly in terrible pain. He fades in and out, writhing and moaning.

Flynn wrestles with a tangled oxygen mask and slips it over the dying man's face. With all his attention focused on the worst-hurt soldier, Flynn shouts to the distraught gunner to keep his less-badly hurt friend awake. The gunner is sobbing, squeezing his stricken friend's hand and mine with equal desperation.

By making the risky landing in the road instead of waiting for the soldiers to be driven to a nearby base, they have shaved at least 15 minutes off of their trip to the hospital. Flynn said he thinks that time probably made the difference between life and death for the worst-injured soldier.

In 48 hours, Flynn, Love, Grove and crew chief Spc. Josh Diehl pulled six wounded Americans, two wounded Afghan soldiers and one dead Afghan soldier off the battlefield. With the exception of one cheerful Afghan soldier who had been shot in the leg for the second time in his adult life, all of the injuries were caused by IEDs and mines.

"The Americans we picked up are all going to make it, no question," Flynn said of the six. "I'm more worried about the psychological effects of what they've been through. I always see guys with that thousand-yard stare."

Despite living a relatively comfortable life on the base, the Medevac crew must make incessant, abrupt transitions to a frantic blur of blood, shattered limbs, purple smoke, fading blue eyes staring through dust and ash, and these 15-minute periods of intense responsibility for the lives of dying soldiers.

Sometimes you can catch Flynn with a touch of the thousand-yard stare too.