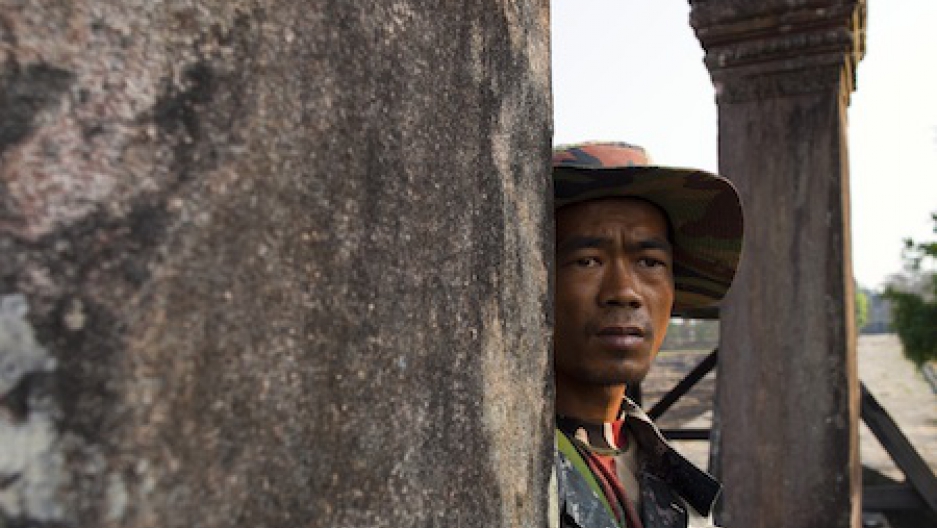 A Cambodian solider looks across at the Thai border from the ancient Preah Vihear temple where a military camp has been set up February 9, 2011 in Preah Vihear province, Cambodia. Thousands of refugees were moved 80 km away from the Preah Vihear temple as tensions remain high on both sides of the border. The 11th century Hindu temple, a UNESCO World Heritage Site, has been the subject of a lengthy dispute between the two countries over ownership of the 4.6-sq-km contested area.
Credit: Paula Bronstein
Share

Troops on both sides of the Thai-Cambodian border have yet to fulfill U.N. orders to withdraw from disputed turf around an 11th century temple scarred by their mortars and bullets.

Still, provincial authorities can't wait to get tourists back into an area that, as of just a few weeks ago, was considered teetering on all-out conflict.

The Bangkok Post reports that the governor of Sri Sa Ket province -- among the poorer locales in an already poor, rice-farming region -- wants to hammer out a deal with his Cambodian counterparts that would re-open the temple to visitors.

But while the temple once brought in tourist dollars, the cash flow was never much more than a trickle. Even the Thai nationalists who were full-on hyperventilating about the surrounding land's rightful Thai ownership weren't flocking to the site before it became the focal point of their ravings. In the last few years, 12 have died and thousands have been displaced by sporadic fighting.

The temple is a full 330 miles from Bangkok: nine hours by car on two-lane roads. Despite its recent infamy, it was never going to attract fun-and-sun hoildaymakers. Maybe regional tourists. Perhaps the occasional history geek with a let's-see-every-temple-in-Thailand agenda.

But seeing as how the temple has scored major regional headlines in the past few years -- and even attracted some international buzz -- might interest have grown stronger?

I, for one, will be pleased if the Preah Vihear temple's tourism appeal is reborn.

That would be one positive result of this long, tedious and still unresolved exercise in saving face and wasting young lives.