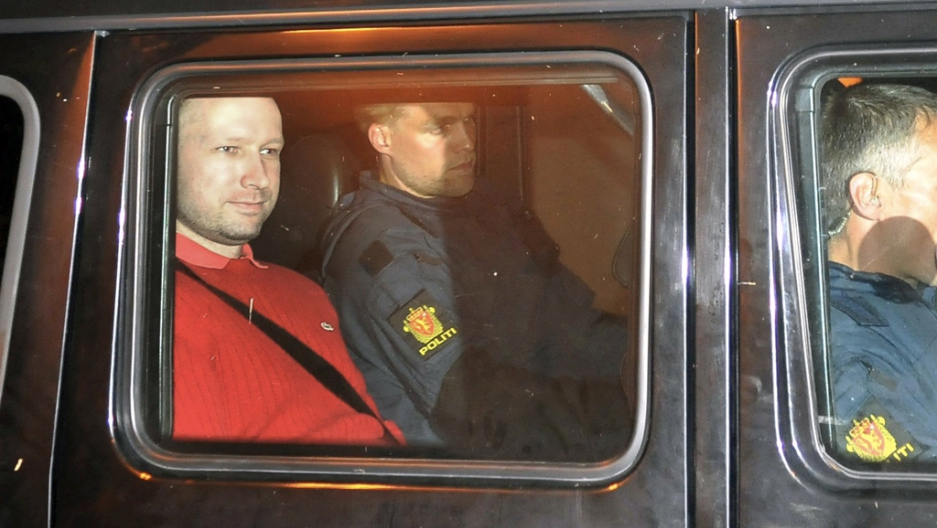 Bomb and terror suspect Anders Behring Breivik (red top) leaves the courthouse in a police car in Oslo on July 25, 2011, after the hearing to decide his further detention. Breivik will be held in solitary confinement for the first four weeks, with a ban on all communication with the outside world in a bid to aid a police investigation into his acts.
Credit: Jon-Are Berg-Jacobsen
Share

BRUSSELS, Belgium — The Norway shooter, Anders Behring Breivik, claimed to be a modern-day Templar Knight, a Christian crusader fighting to chase Islam from Europe and rid the world of “Marxists” — his word for democratic political parties.

Before his attacks that killed more than 90, mostly young, people on Friday, Breivik appeared to have been a small fish in the murky waters of Europe’s extreme right political fringe.

If the rambling 1,500 page testament attributed to him and posted on the internet on Friday is authentic, Breivik claims to have founded a movement inspired by the medieval Templars during a 2002 meeting in London with seven rightists from other European countries. (See VIDEO of alleged manifesto.)

What sets Breivik apart from countless other ultranationalist web-warriors is a dedication to use terrorism and mass murder against minorities or Europe’s mainstream political class, as well as a systematic approach to preparing the attacks.

(More from GlobalPost: Who is the Norway shooter?)

“We will ensure that all category A and B traitors (as he calls supporters of Europe’s mainstream political parties), the enablers of Islamization and the destroyers of our cultures, nations and societies, will be executed,” he wrote. At one point he says 45,000 should be killed.

Before Friday’s attacks in Norway, Europe’s security forces had noted a growth in the scale and sophistication of extreme right-wing propaganda, but believed that the threat of a large scale terrorist attack was on the decline.

Europe’s underground far-right scene is marked by disunity and conflicting views. Breivik for example describes himself as an anti-Nazi and supporter of Israel as an ally in his crusade against Islam, while other Scandinavian extremists hold rampantly anti-Semitic, neo-Nazi views. Some groups like Breivik support Christian conservatism; others proclaim themselves to be born-again Vikings following the ancient Nordic gods.

Right-wing terrorism has hit post-war Europe in the past: The 1980 bombing of Bologna railway station that killed 80 people was blamed on a neo-Fascist organization; a pipe-bomb attack attributed to a rightist radical in the same year killed 13 people at Munich’s Oktoberfest; self-confessed neo-Nazi David Copeland killed three people and injured 139 in a nail bomb attacks against London’s black, gay and Bangladeshi communities in 1999.

But despite growing incidents of skinhead street attacks on minorities, police who have successfully infiltrated white supremacist groups have downplayed their capacity to launch large-scale attacks in Europe. Breivik seems to have escaped scrutiny from the security forces by acting alone as a “solo cell” as he explained in his web posting.

Support for populist, nationalist political parties has surged in many parts of Europe in recent years, exploiting concern over the economic downturn and immigration, particularly the growing number of Muslims living in their countries.

From the National Front in France, to the Dutch Freedom Party — whose leader Geert Wilders likens Islam to Nazism — and Norway’s Progress Party, which once listed Breivik among its members, parties formerly treated as pariahs have become part of the political mainstream across Europe. Such parties distance themselves from the violent fringe and many were quick to condemn the attack in Norway.

“The horrible and cowardly attacks we’ve witnessed are contrary to the principles and values underpinning the Norwegian society,” said Progress Party leader Siv Jensen. “It makes me feel extra sad to know that this person once was a member of our party.”

In the Netherlands, Wilders described the gunman as a “sick psychopath” and insisted the Freedom Party, “abhors everything the man stands for.” Breivik had called Wilders a “steadfast” defender of Western values and listed him among the people he’d most like to meet.

After nine years in the Progress Party, Breivik left in 2006, saying he’d lost faith in democratic politics and decided only violent action could bring about the overthrow of multicultural society. He also developed contacts with the anti-Islamic English Defense League, but said they too were “naive” in not switching to a military campaign.

The number of Europeans involved in neo-Nazi and other far right parties is unclear. German intelligence estimates there are 25,000 ultra-rightists in the country, of which 5,600 are hard-core neo-Nazis. “We can observe and increase in the potential for violence and the willingness to use violence to enforce political goals,” it said in a report issued earlier this month.

In Sweden, the far-right internet forum Nordisk.nu has 22,000 users, including Breivik, according to the monitoring group Expo, which was set up by Stieg Larsson, author of the best-selling Millennium series of crime novels.

In the wake of Friday’s attacks, security forces across Europe are reviewing anti-terror policies to focus more on far-right organizations or “lone wolves” like Breivik. British police already warned this month that white-supremacists may try to provoke a violent backlash with attacks on the Muslim community. Breivik talked openly about the need to trigger a civil war to defeat Islam and “cultural-Marxism.”

“For too long, the challenge from right-wing extremism and anti-Muslim sentiment has been dismissed as irrelevant, and glossed in favour of alternative forms of extremism. 'Far right activists will never get their act together', so the argument goes. 'They are disorganized and lack the resources to commit mass murder',” Matthew Goodwin a University of Nottingham expert on far right extremism blogged on Saturday. “In short, the concept of lone wolves committing mass violence appeared more at home in fiction than political reality. The events in Norway have changed all this.”