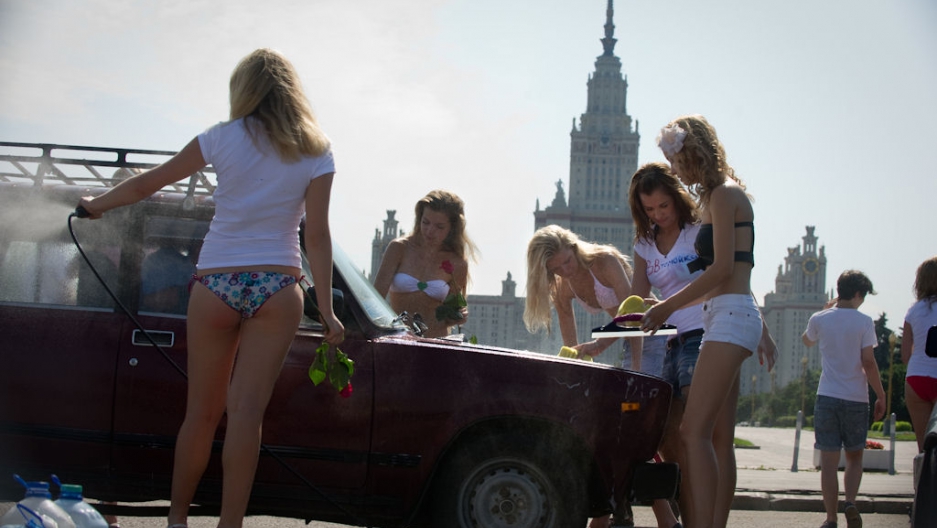 Young women from a group called "I really do like Putin," hold a car wash in front of Moscow's State University building on July 21, 2011.
Credit: Dmitry Kostyukov
Share

MOSCOW, Russia — It suddenly feels like Russia is readying for war.

People are “leaving for the front.” Teenage girls are being asked to “sign up for the army.” But there are no open hostilities. Russia has simply entered election season.

With a parliamentary vote due in December, and a presidential election following in March, an overwhelming militarism has overtaken Russia’s political rhetoric.

First came the formation of the All-Russia People’s Front, a new group founded by Prime Minister Vladimir Putin in May to unite society around him and his party, United Russia. Many are hard pressed to define exactly what it is. Kirill Schitov, a prominent member of United Russia and a leader of its Young Guard youth wing, says: “It’s not an organization. It’s a platform for dialogue.”

Two months after its creation, the People's Front has drawn in hundreds of trade unions and social organizations, as well as entire village streets, putting its membership in the millions. Russian Railways, which joined last month, employs more than one million people. Metals giant Severstal, which announced this week that its trade union had signed up for the front, employs more than 20,000. Then there's the Russian Post and the Russian Agrarian Movement and hundreds of others.

When Alexander Lebedev, the outspoken banking tycoon and owner of Britain’s Evening Standard and Independent newspapers, signed up on Thursday, he titled his announcement “We’ve gone to the front.” The ring of the phrase, especially to a Russian ear, is unmistakable, calling up images from the country’s mass effort in World War II.

Putin has devoted considerable effort during his 12-year (and counting) tenure as Russia’s main leader to boosting the image of World War II, already a devastating experience in the national consciousness, as a means of uniting a country that lost any semblance of ideology in the wake of the Soviet Union’s collapse. He is now using that capital to ensure support for United Russia. He even announced the Front’s surprise creation in Volgograd, formerly known as Stalingrad, the site of the most brutal fight of World War II on Soviet territory.

“The People’s Front will come to be through the consolidation of the political establishment around Putin, on the basis of personal devotion,” Gleb Pavlovsky, a political analyst who fell out from his close position at the Kremlin earlier this year, told the opposition New Times magazine in a recent interview. “It will be a weapon of political and psychological pressure. After all, can you say: ‘What, are you against the Front?’ That’s not being against the party, but being against the Front. And it’s scary — there are trenches there, and mines, and loss.”

The group’s website even calls on users to write “a letter to the front.”

The People’s Front began holding “primaries” this week, a joint exercise with United Russia designed to formulate party lists for the December vote. The party can use all the help it can get. United Russia still leads the pack of Russia’s political groupings, but with just 46 percent telling the VtSIOM polling agency this month they would vote for the party if elections were held July 24, that is far below the sky-high advantage to which it has grown accustomed. Putin, too, continues to slip, with a Levada Center poll released July 22 showing that Putin’s approval rating had fallen to 68 percent — above any other Russian politician, including President Dmitry Medvedev, but well below the 77 percent he was scoring in July of last year.

Nikolai Petrov, an analyst at the Moscow Carnegie Center, says the Front has several goals. “It’s a rebranding of United Russia, so people no longer think of it as a party of ‘swindlers and thieves,’” he said, referring to the viral term thought up by popular anti-corruption crusader Alexey Navalny. “It’s also a way to attract people who can make United Russia more popular, it’s a co-option of other political elite and, to some degree, it’s also a cleaning up of United Russia.”

Then why the militaristic rhetoric? “The popularity of the party of power is falling,” Petrov said. Russian officials, and Putin in particular, he said, have in the past built up “enemies” who were set on destroying Russia — the oligarchs, the West. “Neither one nor the other can work today,” he said. “So maybe the Kremlin decided to compensate for the lack of real internal enemies with such bravado and military rhetoric.”

One group that has managed to find an enemy is Putin’s Army, a collective that formed on VKontakte, Russia’s version of Facebook, last week. In a video calling on “young, smart and beautiful girls” to join their ranks, the narrator points out “those who would throw dirt on him,” their beloved leader. She then announces a contest calling on young women to “tear something” for Putin (before tearing her own tanktop in two) — but the double meaning of the Russian word she uses (porvat) also implies the threat of vicious revenge.

About 20 members of the group gathered in a central Moscow square on Friday evening to “tear for Putin.” Tottering on heels and wearing t-shirts emblazoned with their hero’s image, they didn’t quite know what to do. First, they strutted down a makeshift catwalk — three times. Then, they decided to march, like soldiers, to show their support of Putin.

“I didn’t think it would be such a popular thing,” Maria Utkina, a 19-year-old Putin’s Army leader, said. “Maybe then I wouldn’t have called it an army.”

“We’re ready to do a lot for Putin — we just have no idea what,” she added.

The group, and a similar one called I Really Do Like Putin that formed on VKontakte this month (they’ve already held a Blueberry Hill sing-along and a bikini-clad car wash), have all the hallmarks of Nashi, the Kremlin-connected youth group. But both Putin’s Army and Nashi deny any connection. The racy Putin’s Army video went viral after appearing on Schitov’s blog but he also denies that his Youth Guard movement is involved.

“Any national leader has a huge number of supporters and this is normal,” Nikita Borovikov, the leader of Nashi, said. “Some of his supporters are young girls, this is also normal — they are citizens like any other person.”