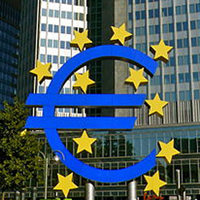 Share
European Union leaders agreed on a second bailout for the heavily indebted Greek government late on Thursday. Athens gets about $150 billion – on top of a similar package from last year. The new bailout takes some pressure off the Euro and calmed bond markets. "We improved the Greek debt sustainability," said Jose Manuel Barroso, the European Commission President. "We took measures to stop the risk of contagion and finally we took measures to improve the Eurozone's crisis management." How did Eurozone leaders do all this? First, they agreed to lower the interest rate on Greece's emergency loans to 3.5 percent, and extended the loans from 7.5 to 15 years. Portugal and Ireland get the same breaks too. It means, in theory at least, that these governments will now be able to go on paying their monthly bills. For Greek Prime Minister George Papandreou, the eleventh-hour deal was a last-minute lifesaver. "We now have a program and a package of decisions which create a sustainable path for Greece, a sustainable debt management for Greece, and this, of course, in the end will mean not only the funding of a program but also the lightening of the burden on the Greek people," Papandreou said. But as Commission President Barroso suggested, the new so-called European Marshall Plan is as much about saving Greece's neighbors as Greece itself. Italy and Spain have seen the interest they pay on borrowing soar in recent days, as Europe seemed unable to cope with the crisis. And the more those interest rates go up, the more governments have to cut spending. In Spain, such cuts are already being felt by doctors and their patients. On a recent afternoon, hundreds of healthcare workers at Barcelona's Dos de Maig Hospital held an emergency meeting to save the hospital itself. The government wants to close it to save money. That would create big problems, according to Sandra Marin, a doctor at the hospital. She said 450 people would lose their jobs. "On top of that, last year we took in more than 1,000 patients from a hospital up the road because it was so full people who were spending days on cots in the hallways," she said. For non-emergency care, recent cuts mean that Spaniards must now wait on average six months for treatment. Given that, the Spanish government is celebrating the Greek deal Friday, since it's caused its own interest rates on bonds to drop significantly. Big questions remain about how the new Greek bailout will be implemented. For the first time, private banks are being asked to voluntarily accept lower interest rates on their Greek bonds. That could save Greece $75 billion over three years. But the ratings agency Fitch has already declared that this "haircut" amounts to a temporary Greek default. That could trigger a new rise in interest rates.