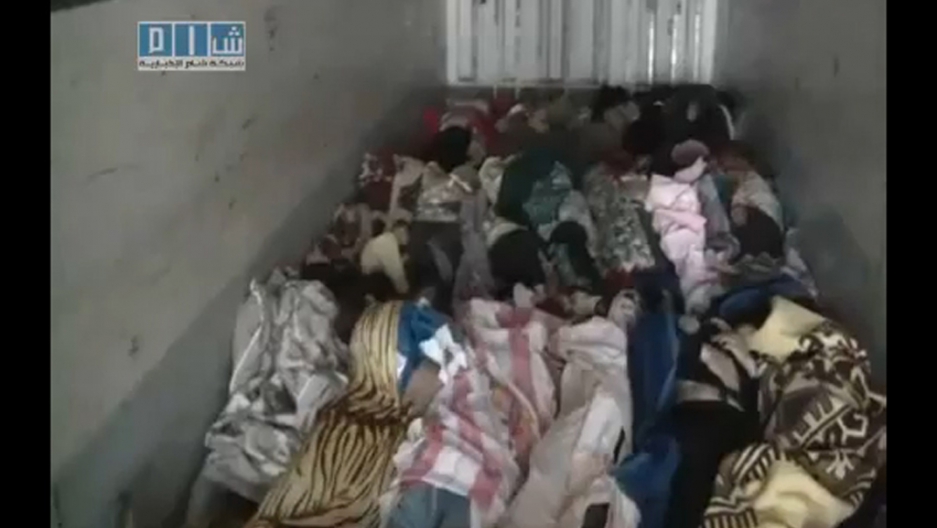 Bodies of people killed by Syrian security forces during protests in Daraa city, stored in a mobile refrigerator, May 4, 2011.
Share

Unable to crush escalating mass protests with 50,000 special forces and with Hama, Homs and several other areas of Syria in near-open rebellion, an analysis out today by Paul Salem, director of the Carnegie Middle East Center in Beirut, concludes the crisis in Syria has “past the point of no return.”

Unrest in Syria has now “unleashed a wave of economic consequences that are only pushing the Syrian state closer to collapse,” writes Salem.

(GlobalPost in Damascus: At great personal risk, a soldier inside Syria tells it like it is)

'“According to recent reports, business and trade are down 50 percent, unemployment has doubled, food and electricity shortages are escalating, $20 billion has already left the country, banks fear a run on their assets and the government is printing pounds at a furious pace, which risks a rapid devaluation of the national currency.”

The outcome, he concludes, is likely to be that the large merchant and middle classes of the big cities will finally turn decisively against a regime with whom the national pact of trading political rights for economic stability has thoroughly broken down.

more on that, read Global Post’s report on the forces at work in Aleppo, the commercial capital of Syria where just such a pact has long been in place but looks set to unravel:

(Read More: If Aleppo fractures, so does Assad)

Salem believes Syria is heading in one of two directions: “Either the regime will accept a new deal based on serious political reform and inclusion, or the country will drift toward civil war.”

Whatever happens, Syria’s three quarters Sunni population will rise to power, overturning nearly half a century of domination by the minority Allawite sect, an offshoot of Shia Islam. The transformation in power relations will inevitably, says Salem, see a future Syria breaking the close ties forged by the Assad regime with Iran and Iranian-financed Hezbollah, now the dominant political and military force in Lebanon.

The widely respected International Crisis Group (ICG), which has had a senior analyst based in Damascus since 2005, also recently released two lengthy reports on the Syrian uprising.

In its first report, ICG concludes President Assad’s regime wrongly characterized Syria’s protestors as a “foreign-sponsored Islamist conspiracy”, squandered “manifold assets” which could have resolved the crisis and in its “sectarian survival instincts,” which rely on the brutality of security forces to crush the uprising, “has ultimately undermined itself in every conceivable way.”

In its second report, ICG concludes that desperate to survive at all costs, the Syrian regime is committing “slow motion suicide.”

Further adding to Assad’s woes are reports by the world’s top two human rights organisations accusing his security forces of committing crimes against humanity and urging that Assad’s regime be held to account at the International Criminal Court.

Documenting human rights abuses in Daraa, the southern border city that was the cradle of the uprising, Human Rights Watch found the nature and scale of abuses - which included brutal torture in detention and security forces routinely preventing injured protestors from receiving medical care - “were not only systematic but implemented as part of a state policy” strongly suggesting “these abuses qualify as crimes against humanity.”

Amnesty International reaches a similar conclusion in its report on abuses by Assad’s security forces in the western town on Tell Kalakh.