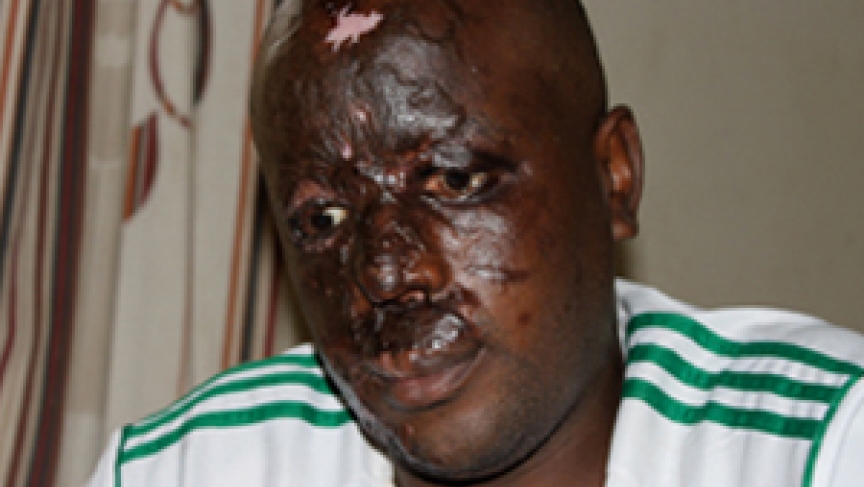 Deus Twesigye was a victim of an acid attack in Uganda. (Photo: The World)

Story by Bonnie Allen, PRI's The World. Listen to audio above for full report.

Deus Twesigye sits in the back of a bus in Uganda, dreading the inevitable whispers and stares. The 28-year old accountant pulls his baseball cap down to hide his disfigured face. Scars stretch in all directions like a jigsaw puzzle. Half of his nose is missing.

Twesigye is the victim of an acid throwing attack.

"It's sad for me to be in environment with many people," Twesigye said. "You see people looking at you, wondering what has happened to you. It has changed my life."

Twesigye said his ex-girlfriend is to blame. They dated in college for three years, but Twesigye broke up with her when he moved to a different town to start a job. Six months later, he said, the ex-girlfriend confronted him and splashed sulfuric acid in his face.

"Immediately, I felt a lot of pain and I couldn't see anything," Twesigye said.

Twesigye's story is all too common here, according to Dr. Ben Khingi, a plastic surgeon who treats two or three acid-attack victims every month at Uganda's national hospital. But acid attacks are not common in Africa, compared to places like India, Pakistan and Bangladesh, where hundreds of women are burned and disfigured every year.

Khingi said the victims in Uganda are both women and men, and he's no longer surprised when a woman has engineered the crime. "Most of the people who do it are women,” he said. "But also some men have been paid to do it."

It's not entirely clear why acid attacks have caught on in Uganda, said Doreen Ayebare, with the Acid Survivors Foundation in the capital, Kampala. But she points out that throwing acid can be done from a distance, and that acid is cheap and readily available. The attacks are also rarely prosecuted. Most of the attacks are crimes of passion, Ayebare adds.