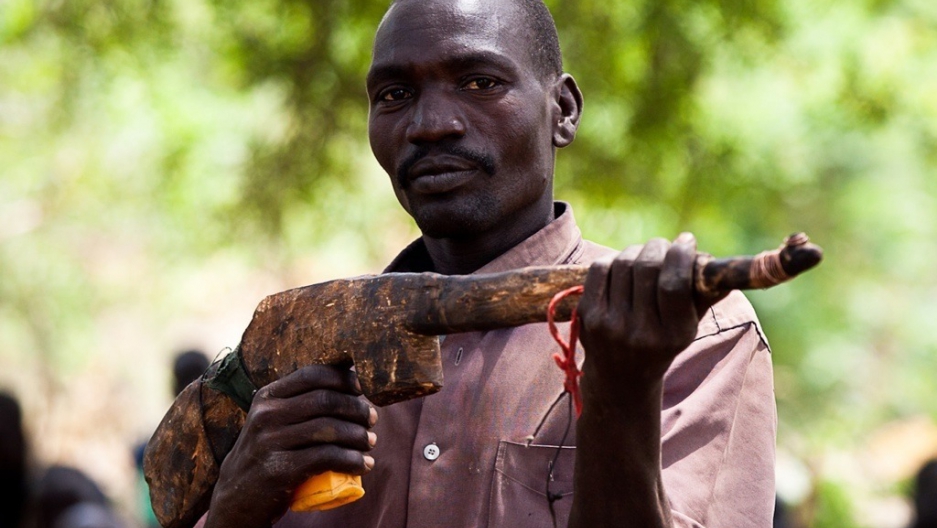 A new recruit for the Sudan People's Liberation Army (SPLA) takes part in a training session in a secret camp in the Nuba Mountains of South Kordofan province in preparation for what they call a long war against Khartoum on July 11, 2011. High up in Sudan's Nuba Mountains, hundreds of men train to join fighters aligned to the ex-rebel army of the South, the SPLA.
Credit: Trevor Snapp
Share

A United Nations report charges that war crimes are being committed in into Sudan's South Kordofan province.

The U.N. report urges an investigation into the situation. It said the Sudan government army is suspected to be responsible for "especially egregious" atrocities, but the rebels are also thought to be guilty of abuses. The report has been leaked to news organizations, including the Voice of America and the BBC.

Sudan President Omar al-Bashir's government in Khartoum is using the Sudan Armed Forces and militias to attack the Nuba people and to force them out of the Nuba Mountains because they supported the independence of South Sudan, according to numerous reports.

Bashir's government says it is merely responding to rebel attacks in the area which borders South Sudan. The Sudan army is simply trying to achieve stability in South Kordofan, said a government spokesman who rejected the allegations in the U.N. report. He said the region's rebels — not the army — had fired upon civilians.

The current conflict in South Kordofan has displaced more than 70,000 people.

The U.N. report alleges there are summary executions, aerial bombardments of civilian communities and neighborhoods. The report urged the U.N. Security Council to establish a commission of inquiry to investigate the allegations, possibly with the help of the International Criminal Court. If the allegations are true, they would amount to war crimes and crimes against humanity, the report said.

The U.N. report is expected to increase pressure on Bashir. The ICC has already issued an arrest warrant for Bashir for alleged genocide and crimes against humanity in the separate eight-year conflict in Sudan's Darfur region.

There is also an arrest warrant for Ahmed Haroun, a former Darfur governor who is now South Kordofan's governor.

Many people in South Kordofan, especially the Nuba people of the Nuba Mountains, fought with southern rebels during the two decade North-South war but now find themselves in the North. Now they are being targeted by the Bashir regime, according to reports.

Hundreds of Nuba men are training in the Nuba Mountains to fight against the Bashir government, according to journalists who visited the embattled area.

Last month, Sudan's government and the rebels agreed in talks brokered by the African Union that 4,200 Ethiopian peace-keepers should be deployed to Abyei. There are some U.N. peacekeepers in South Kordofan but many of the Nuba people have protested that the U.N. forces are not protecting the local people.