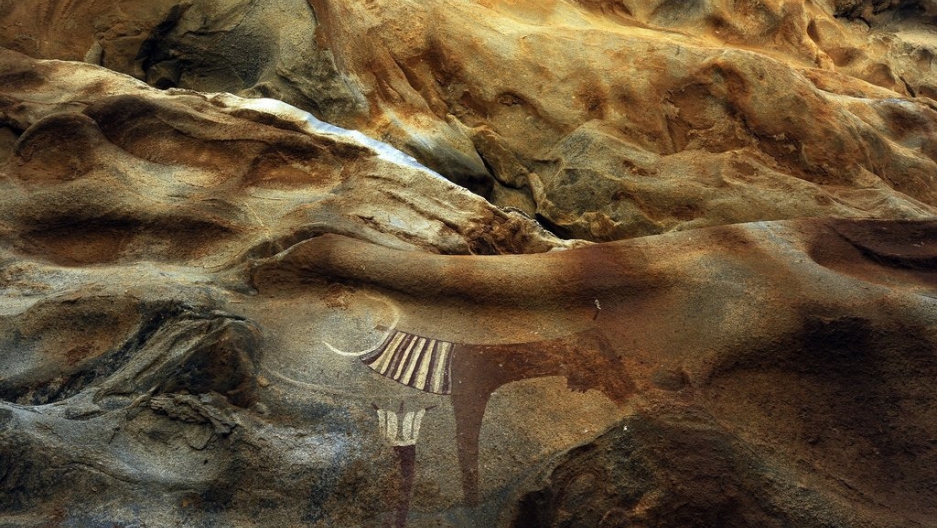 A primitive rock painting, of a galaxy of colorful animal and human sketches to adorn the caves in the rocky hills of this arid wilderness in northern Somalia, in Laas Gee.
Credit: Tony Karumba
Share

HARGEISA, Somaliland — Follow an unmarked dirt road to a dry riverbed in the scrubby, northwestern Somali plains and in the shadows, beneath the sandstone outcroppings, are remarkably well-preserved paintings.  They date back between five and 11,000 years and cover the rock walls in streaks of white and black and barbeque sauce red.

White stripes  highlight a warrior's clothing, the point of his spear and the curve of an ancient cow’s udder.

This is Somaliland's Laas Geel. Anywhere else in the world such cave paintings would undoubtedly be a UNESCO World Heritage Site, but here — in the unstable Horn of Africa — it’s in danger of being swallowed up by decades of war, political unrest, drought, poverty and neglect in a region that most of the Western world has left for dead.

And that’s where Sada Mire, a young London-educated Somali archeologist, enters the scene. As the only Somali archeologist working on the ground in greater Somalia, and one of only a handful of academics worldwide focusing on the region, she is trying to almost single-handedly identify and protect what’s left of Somali heritage. And she’s doing it without adequate funding, resources or a qualified staff.

Although Mire is originally from Mogadishu, the young archeologist now heads up the Department of Antiquities for the unrecognized republic of Somaliland, a breakaway region in northern Somalia. While visitors to Somaliland are still required to travel with guards armed with AK-47s, the breakaway republic’s de facto government has been able to maintain a relative peace for nearly 17 years, creating a platform from which the preservation of Somali cultural heritage may begin — if it’s not too late.

“A whole country’s history is almost gone already,” said Mire, who received her doctorate from the University College London last year. “So much has been destroyed already. Boxes of documents, Bibles, scrolls, coins, swords, knives, traditional art, jewelry, beads — all of it is gone forever.” The entirety of the former Somali National Museum in Mogadishu was looted in the period before 1979, and no museums or archival spaces exist today, she said.

“We don’t even have complete records of what we once had,” Mire said. “The only thing we can do is try to protect what’s left.”

Mire has been able to survey sites from the Ethiopian border to Berbera, a port on the Gulf of Aden — all of which is under the auspices of the de facto Somaliland government — but it’s still too dangerous, even for her, to work in Somalia itself.

In the last half-century, troves of archeological artifacts have been removed from Somalia, first by the Italians and British who colonized the region in the first half of the twentieth century and then, after independence, by impoverished Somalis themselves, driven to sell artifacts for a handful of U.S. dollars to feed their families.

When Somalia descended into civil war in 1991, the problem worsened as warlords began “systematically looting” archeological sites to fund the war, Mire said. In some places, historic buildings, like the Mogadishu Cathedral, were destroyed by mortars and bombs. In other places, buildings have been deconstructed, stone by stone, by locals to build corrals for their goats or houses for themselves.

In Laas Geel, local herders, unaware of the historic significance of the rock paintings, used to take shelter in the rock outcroppings, lighting campfires that destroyed some of the ancient images.

“The thing is to get there before it’s all destroyed, to preserve at least a record of what was there,” said Geoffrey King, a professor at the School of Oriental and African Studies at the University of London, who worked with Mire when she was a graduate student.

Modern-day Somalia spans a region where first generation Muslims, traveling from Arabia by boat, would have landed in Africa in the seventh century, King said. “This time period has never been studied in much of this region, so protecting what we have is beyond important.”

Mire’s work so far has focused on educating locals, and especially the respected elite — sheikhs, elders, community leaders — who live near important heritage sites and who can act as unofficial custodians and protectors. “It’s not an ideal solution, but it’s a start,” Mire said. The rock art at Laas Geel, the most well-known of the heritage sites in Somaliland, is the only archeological site in greater Somalia that employs guards, at the expense of the Somaliland government.

Mire’s next priority is to establish antiquity laws in Somaliland that would prevent the sale of remaining artifacts to rich collectors abroad — a task that will require that she essentially write legislation for a country that does not yet exist. Unrecognized by the international community, the territory does not qualify for traditional avenues of funding or protection from institutions like UNESCO, and its laws are toothless in an international context, as it is still officially under the auspices of long failed Mogadishu in Somalia proper.

Mire will face “incredible challenges from every direction” since most international institutions’ bureaucracies are not equipped to work with unrecognized or failed states, said Andrew Reid, an archeologist at the University College London’s Institute of Archeology, who is familiar with working in sub-Saharan Africa.

But Somaliland’s former Minister of Tourism and Culture, Abdirisaq Wabre Roble, isn’t daunted. He says Mire’s work is vital, both culturally and for the economy of the semi-state.

“Laas Geel is a national monument. People from all over come to see the paintings there,” he said in an interview last year. “Protecting them — and all the other sites around Somaliland — is very, very important to us. This is our history. It’s who we are.”

And then, echoing Mire’s wildest dreams, he mused, “Maybe soon we’ll even have a museum.”