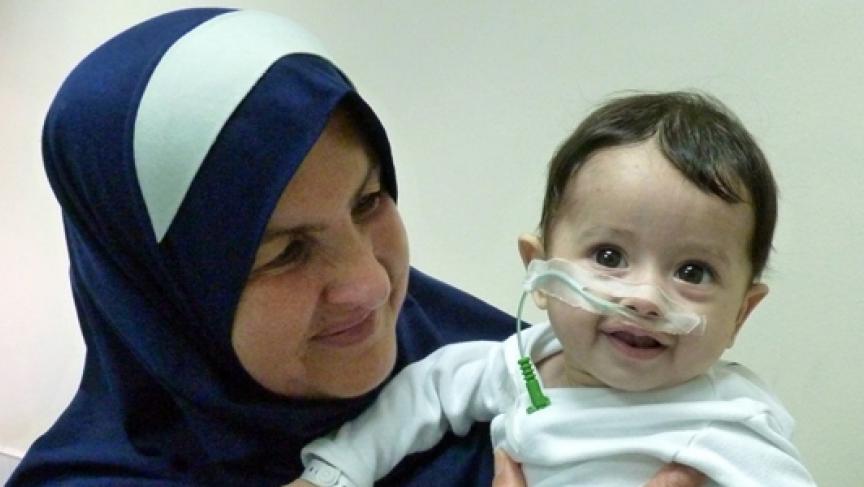 Odai flashes a million dollar smile on the morning of his heart operation. (Photo: Matthew Bell)

Share
Seven-month-old Odai Al-Kafarna was grinning at everybody in the hospital on a recent morning, despite the fact he had tubes taped to his face. He was obviously feeling much better than he did when got here 10 days before. That was good news, because Odai was about to go under the knife. This was the day Odai was scheduled to undergo open-heart surgery. Odai's grandmother, Haniya, cried quietly as she handed the baby off to a nurse, who carried him into the operating room. Haniya brought her grandson from their home in the Gaza Strip, through the heavily militarized border, and into Israel. She had only been to Israel once before and that was twenty years ago. "Everything is going well," she told me. "Thank God." "They've been really good to Odai here at the hospital." Haniya had slept next to the baby in the hospital since they arrived. She said she had talked with a few Israelis during her stay here, but not too many. Most of them don't speak any Arabic, she said, and she doesn't speak Hebrew. "People are good," Haniya said in the hospital waiting area. "Regular people are good everywhere. We don't have problems with each other." In the operating room, Odai had stopped smiling. He was lying on his back, surrounded by hospital staff. They were getting him ready for the operation. Soon, the anesthesia kicked in. And the room started to buzz with activity. Odai had a hole in his heart. That makes the heart work inefficiently. Doctors said in his case, one side of the heart was about a third larger than it should have been. Basically, Odai's heart was wearing itself out. "In this case we caught it early," said Godwin Jeffrey, a Tanzanian doctor on a three-year training stint with the Israeli non-profit, Save a Child's Heart. "The patient will improve like any other person and they will have a very normal lifespan." Without surgery, Jeffrey said that Odai would probably not live very long. The procedure being performed on him closes the hole in the heart using a small piece of gortex. "The prognosis is very good," Jefrrey told me just before the operation got under way. "It's one of the easiest heart surgeries to do." But it's also the kind of procedure that is impossible for doctors in Gaza, where Odai lives. No hospital there has a high-tech by-pass machine, for example, like the one Odai was hooked up to for this operation. Ten days after the operation, I went back to the hospital. Odai was smiling as if he knoew he might be heading home soon, and that his life would soon be very, very different. Everything checked out during the final exam, so the doctors gave Odai and his grandmother a green light to leave the hospital. They had been in Israel for a total of 20 days. After some final instructions from a nurse, Haniya and the baby got into a taxi for the return trip to the Erez border crossing. A couple of hours later, they arrived back at the family home in Beit Hanoun, in the northern Gaza Strip. There was a welcome party of a couple dozen relatives and neighbors waiting outside — some with fireworks at the ready. Odai's grandfather, Mahmoud Al-Kafarna said everyone was so happy. "It's almost as if Odai has come back from the dead," he said. Odai's father, 21 year-old Ali Al-Kafarna, said he was incredibly worried. He tried to work as much as possible to keep his mind occupied. And now that his only child was back home and looking healthier, he said, "I must be the happiest man in the world." Odai's mother, Taghreed said she felt the same way. "These past three weeks were incredibly difficult," she said. "But calling the hospital to hear the baby babble a little over the phone, that helped a lot." At a time when sentiments of good will between Palestinians and Israelis seem rare, the Al-Kafarna family expressed their gratitude to the doctors in Israel who treated Odai. Mahmoud, one of Odai's grandfathers, recalled the days before the intifada when Palestinians from Gaza interacted with Israelis on a regular basis. "Hopefully, this is a good sign for peace," he said. "Maybe a family like ours one day can go visit a sick relative in an Israeli hospital." "And maybe, relations between Palestinians and Israelis, eventually, will get back to normal. That's what we wish for."