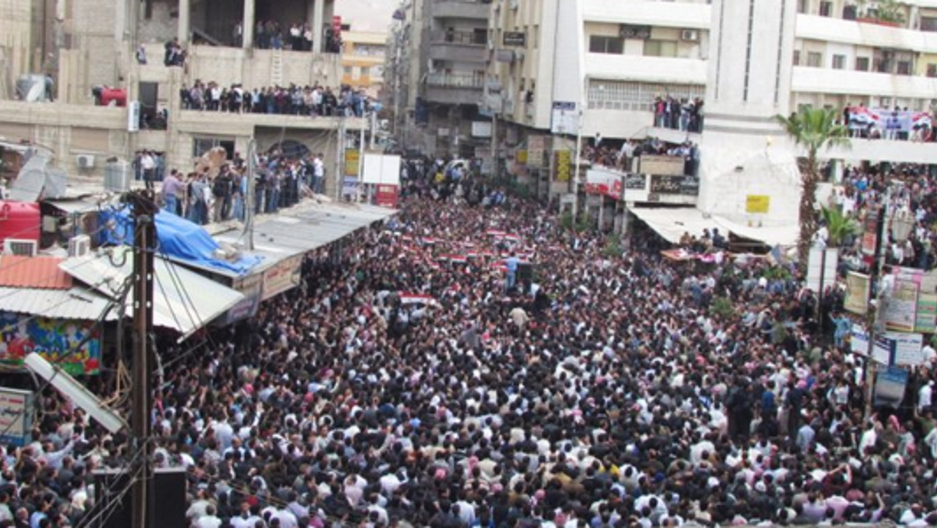 By Dale Gavlak Ibrahim al-Jahamani is a car dealer from the town of Daraa where the uprising against President Bashar al-Assad began. These days al-Jahamani spends his days as an activist. He maintains contact with Syrian opposition at home and abroad through text messages and e-mail. Al-Juhamani said he was detained in May. "There were random arrests taking place after the army entered our town," al-Jahamani said. "A friend and I were walking in the street. When he tried to run away, the soldiers opened fire and he fell. They beat him until he died. They took me to a Damascus jail for interrogation." Al-Jahamani said there was more horror in store at the detention center. "In a corridor, I saw a boy. He was naked. The interrogators laid him on his belly. He had a gunshot wound on his side. They beat him severely with an iron bar and blood poured from his body." Later that day, the beatings resumed. "The boy cried out for his father and mother to help, but the interrogators told him, 'Bashar al-Assad is your father and mother,'" al-Jahamani said. "He chanted the anti-regime protest slogan, 'In God we trust.' But they insisted, 'No, in Bashar we trust.' The following day, the boy's screams abruptly stopped." Meanwhile, Al-Jahamani said the interrogators were taking care of him too. "They beat my head, legs, hands and back. My nose was broken. The scars are still visible. We were naked, barefoot and the torture was systematic, every day," he said. "They used to tie us with chains. Others were held in a cross-like position. Some were hanged upside down and continuously beaten." But al-Jahamani said it was the torture of the boy that haunted him the most. Al-Jahamani was released after a couple of weeks. He said that once outside, he saw pictures of the boy on a satellite channel. He was 15-year-old Thamer al-Sharei from Daraa. "I realized Thamer died from the torture. Thanks to God, I have a document that proves I was detained in the same period and place with Thamer." The document was issued by a Syrian judge and it does in fact state that al-Jahamani and the boy were in the prison at the same time. Al-Jahamani and a friend, who wishes not to be named, are on the run from authorities. Al-Jahamani said the chances of Assad remaining in power are not good. "I expect the regime will fall. Now is the beginning of its collapse. The economy is suffering. The authorities accuse pro-democracy protesters of being militants or belonging to armed gangs. These are fabrications. Meanwhile, the protests continue. Syrians are no longer fearful." But regime opponents have been saying such things for a while now and so far Bashar al-Assad doesn't seem to be going anywhere.