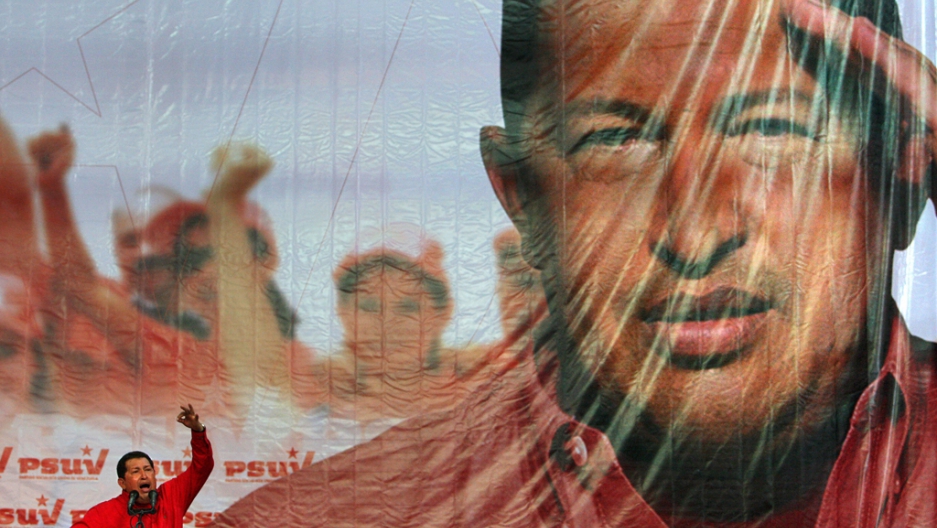 CARACAS, Venezuela — With President Hugo Chavez on the mend from cancer surgery, Venezuelans are debating whether he will be strong enough to campaign for re-election next year. They’re also mulling over what Chavez has accomplished during the past 12 years — especially when it comes to the poor.

Under Chavez, living standards have improved for the county’s have-nots. But critics refuse to give Chavez any credit and claim he’s squandered billions in petrodollars. Given the country’s vast oil wealth, they say that Venezuela ought to be in much better shape.

"This has been like winning the lottery," said Luis Pedro España, a development expert at Andres Bello Catholic University in Caracas. He says Chavez lucked out by presiding over Venezuela’s first oil boom in 30 years but failed to wisely invest the windfall from record high petroleum prices.

Chavez clearly benefitted from providential timing. Under his watch, the price of oil jumped from about $9 a barrel to more than $100. He’s funneled a lot of that money into anti-poverty programs and, in the process, solidified his political base among Venezuela’s poor masses.

(Read more: How Nicaragua made the most of Hugo Chavez's riches)

A recent example of his government’s largesse came during a visit to an elementary school in a Caracas slum by Education Minister Maryann Hanson. She and her aides passed out blue-and-white laptop computers to the astonished students. It’s part of a government plan to give away nearly 2 million laptops to primary school students to improve computer literacy.

"We are preparing kids for the challenges of new technologies,” Hanson told GlobalPost.

Free computers are part of a broader government campaign to make education more accessible. And it seems to be working. Enrollment at primary schools is up 50 percent. University enrollment has tripled.

In fact, government statistics on education, health and economic development point to a substantial, if not great, leap forward for the working and lower classes.

Unemployment and poverty have been cut by half. The rate of extreme poverty is down by two-thirds. Thousands of clinics, many staffed by Cuban doctors, have been built in the slums as have government grocery stores that sell subsidized food. The rate of infant mortality is falling while life expectancy is rising.

All this comes after Venezuela registered one of the world’s worst economic declines between 1970 and 1998, the year Chavez was first elected. During that period, per capita income fell by 35 percent and the poverty rate jumped from 33 percent to 49 percent.

During the Chavez presidency, the gap between rich and poor has narrowed and now stands at one of the lowest levels in Latin America as measured by the so-called "Gini coefficient."

"Venezuela has made significant progress in the past 12 years toward creating a more egalitarian, inclusive, and participatory society,” wrote Gregory Wilpert, an American sociologist and author who founded a website that covers current events in Venezuela.

Even so, Venezuela is rarely held up as a model for development, largely because Chavez himself is so controversial.

Critics view Chavez as a populist demagogue and a danger to democracy since the president and his political supporters control nearly all important government institutions. They dismiss his social welfare programs as cynical, short-term maneuvers to win over the masses and remain in power.

Others claim these programs are badly managed, wasteful and lack transparency. Political analyst Jose Toro points out that the state oil company, known as PDVSA, is now in charge of running many of the social programs and has neglected its core business of exploring for and producing petroleum.

"PDVSA has become a social welfare agency instead of an oil company,” said Toro, a former PDVSA board member. “If you did that with Exxon, BP or Shell, they would go broke very fast.”

Meanwhile, soaring street crime, frequent power outages and one of the highest rates of inflation in Latin America have wiped out some of the gains. That’s why España, the development expert, calls the changes under Chavez superficial rather than structural.

For example, the jobless rate has dropped partly because the Chavez government has nearly doubled the number of state workers, from 1.2 million to 2.2 million. Doctors and nurses have been stationed in barrio clinics but patients who need major surgery must often rely on rundown public hospitals that lack medicine and equipment. Chavez himself opted for cancer surgery in Cuba last month rather than risk the operation in his own country.

Another frequent complaint is that social programs come infused with large doses of political ideology. At a Caracas community center in the January 23 barrio, for example, local residents were receiving medical checkups and participating in workshops on how to defend the Chavez revolution.

Yet the attendees were genuinely excited about Chavez, which is why many of the poor and working-class — who used to stay home on election day — have registered to vote. Turnout in presidential elections increased from 65 percent in 1998 and to nearly 75 percent in 2006.

Not surprisingly, many of these new voters cast their ballots for Chavez. He’s won three presidential elections by wide margins and, before his recent medical problems, was the strong favorite to win another six-year term in 2012.