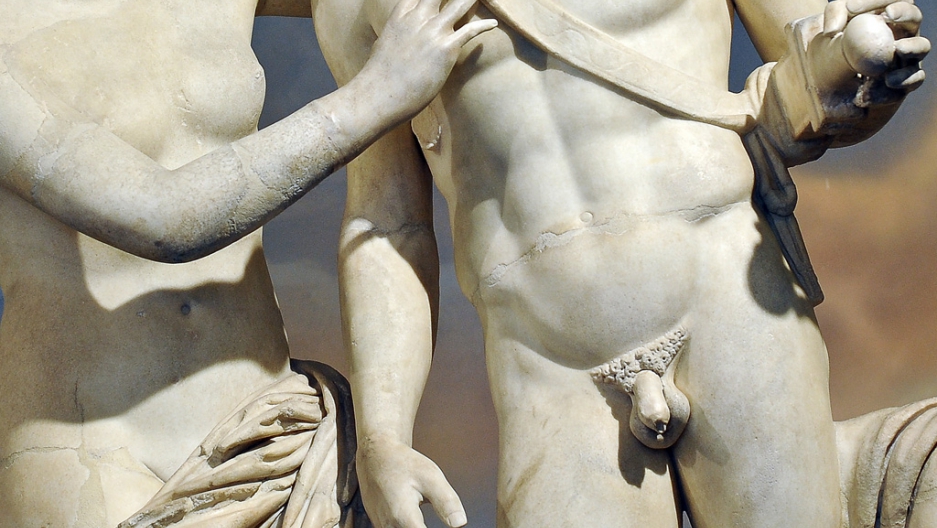 A Roman statue of Venus and Mars is displayed at Prime Minister Silvio Berlusconi's office on Nov. 18, 2010 after being restored. Mars got a new penis and Venus a new hand under orders from the Italian leader.
Credit: Andreas Solaro
Share

Adam Smith had a penis, but to my knowledge, the world's most famous economist never wrote about it.

But his seminal work on economics, The Wealth of Nations, is so 1776.

Today, thanks to the world wide web and Google, those interested in either (or both) penis sizes and the global economy can find economic papers with titles like this: Male Organ and Economic Growth: Does Size Matter?

(More from GlobalPost: Penis sizes worldwide: Yeah, there's a map for that)

Written by Tatu Westling at the Helsinki Center for Economic Research (and, yes, we're fact-checking), here's the paper's abstract:

This paper explores the link between economic development and penile length between 1960 and 1985. It estimates an augmented Solow model utilizing the Mankiw-Romer-Weil 121 country dataset. The size of male organ is found to have an inverse U-shaped  relationship with the level of GDP in 1985. It can alone explain over 15% of the variation in GDP. The GDP maximizing size is around 13.5 centimetres, and a collapse in economic development is identified as the size of male organ exceeds 16 centimetres. Economic growth between 1960 and 1985 is negatively associated with the size of male organ, and it alone explains 20% of the variation in GDP growth. With due reservations it is also found to be more important determinant of GDP growth than country's political regime type. Controlling for male organ slows convergence and mitigates the negative effect of  population growth on economic development slightly. Although all evidence is suggestive at this stage, the `male organ hypothesis' put forward here is robust to exhaustive set of controls and rests on surprisingly strong correlations.

I had a brief email conversation this afternoon with the author of the paper, Tatu Westling. Here's a rough transcript:

Is this a serious economic study or a lighthearted parody?

It started as a half-serious attempt, but frankly speaking I did not expect the correlations to be so robust as they turned out to be. Hence the seriousness increased as the study proceeded, and I may submit it to an economics journal at some point. But seriousness does not imply that I believe in causality at this point.

How and why did you decide to cover this particular topic?

I saw the online "world penis size map" by accident, and immediately recognized an economic narrative. The paper resulted from pure curiosity to assess this peculiar link.

What reactions have you received from your colleagues and others about the paper?

Reactions have been both amused and serious. The latter means that some have speculated whether there is actually some causality or are the links completely spurious. It might evidently be either way.

What is the most surprising or interesting thing you learned about this subject?

The most perplexing issue was that the negative relationship between 1960-1985 growth rates and male organ was so robust in statistical sense, and even survived the region and polity controls.