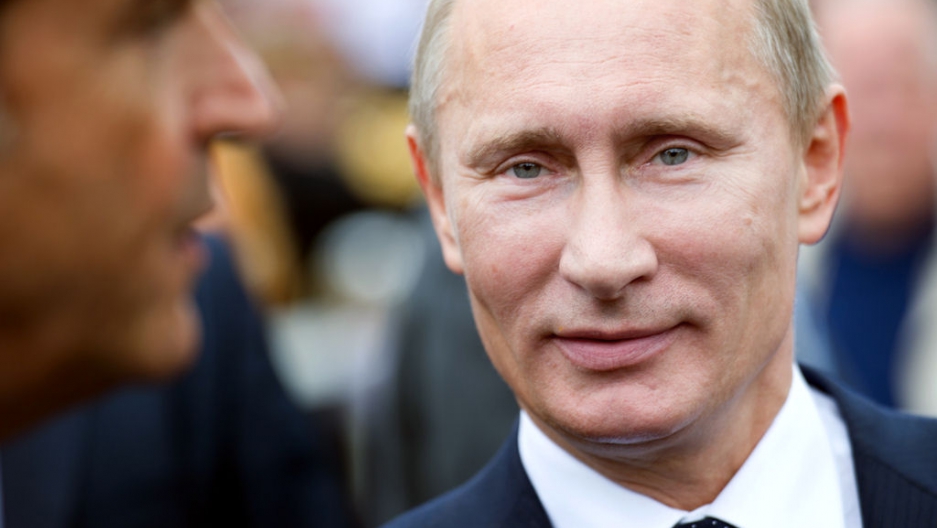 Russian Prime Minister Vladimir Putin is seen during the inauguration of a monument dedicated to World War I Russian soldiers on June 21, 2011 near the Seine River in Paris, France.
Credit: Martin Bureau
Share

Election watch continues in Russia and some are seeing growing signs that Vladimir Putin is indeed planning to come back to the presidency. According to The New York Times, Putin held “what appeared to be a calculated pre-election appearance” at a factory on Friday. He has publicly taken the reins in berating officials over the tragedy on the Volga.

And there are increasing “popular” actions. Last week saw dozens of teens singing “Blueberry Hill” in front of the White House, called by a social media group named I Really Do Like Putin. And now we have this (for those at work, beware the excessive attention to breasts):


The video was posted on the blog of Kirill Schitov, a United Russia deputy in the Moscow Duma. It’s called “I Tear for Putin” (tear as in “rip,” as in “rip open your shirts, girls”). It’s got everything – slick design, plenty of hip Apple products and, of course, boobs.

“Hi, my name is Diana. I’m a student. I’m crazy about a person who changed the life of our country. He’s a capable politician,” the narrator says, as the cameraman artfully manages to fit her iPhone, her cleavage AND her Orthodox cross in a single shot. “He’s a chic man. He’s Vladimir Putin.”

“There are millions who adore him, who trust him. But there are many people who throw dirt on him. Maybe they’re scared? Or maybe out of their own weakness? Because they’ll never be in his place.”

“Young, smart and beautiful girls have united in the Putin Army,” she continues, as she meets her two friends – one of them has a Mac! The other drinks in a sexy fashion! “An army that will tear for him.” Thus continues the militant rhetoric launched by Putin’s WWII-sounding People’s Front, a new organization designed to unite society around the dear leader.

She then announces a competition – make a video in which you tear something for Putin, put it on the Putin's Army page on the VKontakte social network and whoever makes the most original video gets an iPad2. Who knows, Diana herself might win. The way she jiggles her breasts before tearing open her shirt is indeed …. original. (Though I am reminded of last year’s calendar wars.)

This, I think, is what happens when Kremlin spin doctors wake up to social media.

Schitov, a leading member of United Russia's Young Guard youth movement, doesn’t see anything slimy in it, nothing sexist, nothing, potentially, pedophiliac (how OLD are those girls?)

Instead he writes: “Beautiful and smart girls have united in the Putin Army and invite people to join their ranks.” He then makes two points:

“1) The video has the correct thought: certain groups of people don’t like a strong leader in Russia. Some don’t like that Russia, compared to the 1990s, has gotten stronger and now has to be reckoned with in the international arena. Some don’t like that we no longer have to agree our budget with the IMF and that money from natural resources go into the country’s budget and not abroad, as it was before under production sharing agreements, which Putin cancelled. There will always be those who are envious of and who don’t need a strong Russia.”