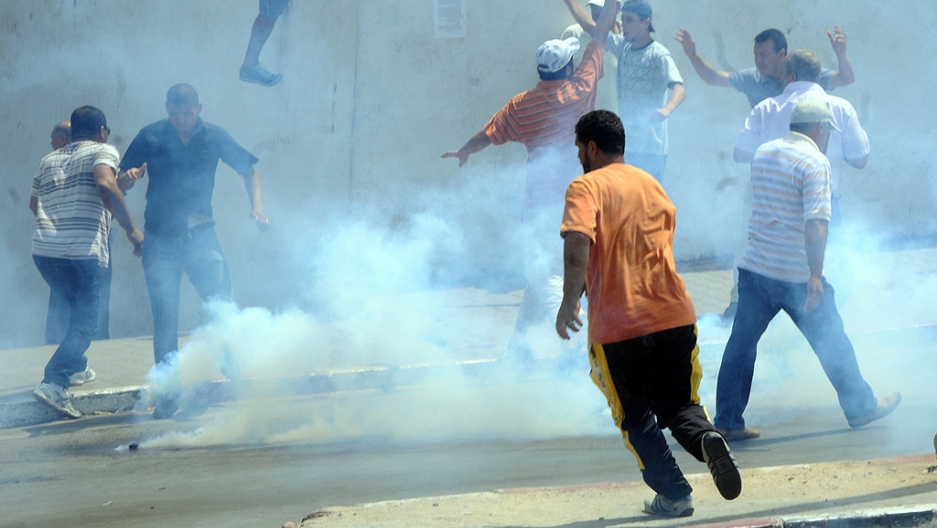 Projectiles are thrown during clashes between Tunisian security forces and demonstrators on July 15, 2011 in downtown Tunis. Tunisian police fired teargas Friday to break up an anti-government protest in the capital. After Friday prayers, hundreds of protestors joined a sit-in near the seat of government in the Kasbah neighbourhood to demand the resignation of the interior and justice ministers.
Credit: KHALIL
Share

Think Tunisia's transition to democracy since the ouster of its autocratic president has been a smooth one?

Tunisian police fired tear gas to disperse hundreds of anti-government protesters in Tunis on Friday, according to Agence France-Presse. The demonstrations called for the adjudication of security forces accused of killing protesters during the country's uprising.

The United Nations estimates that 300 people were killed in late December and January.

Clashes broke out earlier this week south of the capital, Tunis, and police again used tear gas to disperse crowds of hundreds, some of whom were carrying knives and swords, according to Reuters. A curfew was imposed in the city of Gafsa after the incident.

"Shops have been closed and the city is completely empty. People have returned to their homes because they are afraid," resident Ben Saleh told Reuters.

In the six months since ex-president Zine al-Abidine Ben Ali fled the country following widespread protests across the tiny North African nation, Tunisia has been wracked with political and economic instability.

(GlobalPost in Tunis: Toppling Ben Ali was just the beginning)

In May, security forces battled members of Al-Qaeda's North Africa wing in a clash that left two Tunisian soldiers dead, according to state media. Several conservative Islamists attacked a cinema in Tunis last month in a bid to stop the screening of a film they considered to be offensive.

Hamadi Redissi, a professor of political science at the University of Tunis, argued in the New York Times on Saturday that Tunisia's political future will remain uncertain until the country reforms its judicial system to prosecute former regime officials and police accused of killing protesters during the uprising.

In his editorial entitled "The Revolution is Not Over Yet," Redissi wrote:

[T]he flawed and lumbering legal system has not satisfied a population yearning for genuine justice. So far not a single dollar transferred out of the country by the Ben Ali family has found its way back to the state’s coffers, not a single police officer implicated in the murders of almost 300 protesters has been convicted and not a single member of the ruling clan that fled the country has been extradited to Tunisia — including Mr. Ben Ali.

A Tunisian court sentenced both Ben Ali and his wife to 35 years in prison and gave them a fine of $66 million following their trial in absentia.  Both were charged with misuse of public funds.

Ben Ali called the proceedings "a false and shameful image of victor’s justice," according to a statement issued by the former president's lawyer.

The continued unrest in Tunisia comes with just over three months before the country's first national elections since Ben Ali left.  Tunisians will vote for a constituent assembly - the body that will write the country's new constitution - on October 23.