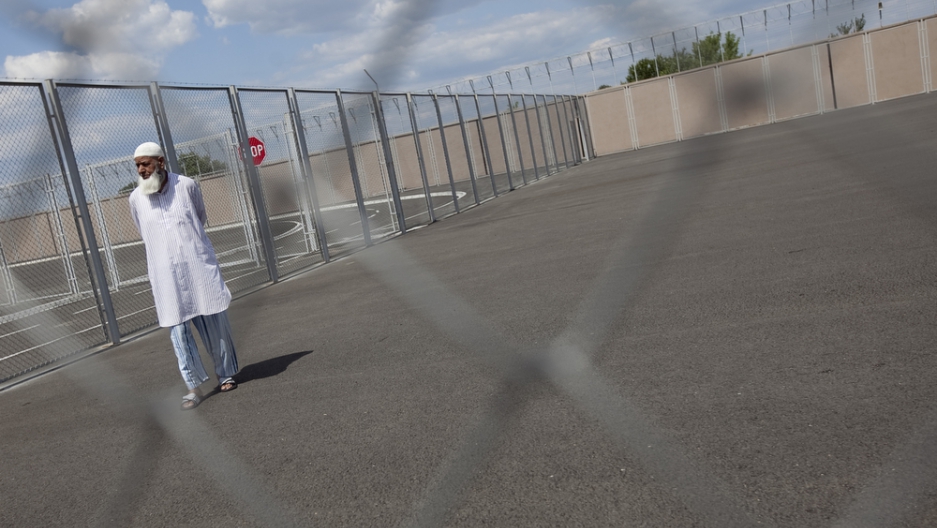 A Pakistani man who says he fled violence in his home country waits with his wife and three children for the results of their request for asylum at the Special Home for Accommodation of Foreigners in Lyubimets, Bulgaria.
Credit: Jodi Hilton
Share

KAPITAN ANDREEVO, Bulgaria ― A narrowly paved road and a rusting fence is all that divides the European Union from Turkey north of the Bulgarian border checkpoint at Kapitan Andreevo.

But the EU is pumping technological resources into fortifying border controls for one of its newest members. Using infrared cameras placed along the border, officers can spot illegal crossings on monitors at headquarters. It’s just one recent upgrade to Bulgaria’s Soviet-era systems.

Bulgaria, along with fellow new EU member Romania, hopes to join the Schengen borderless travel zone. Officials fear that one reason their bids have been put on hold is their borders will attract illegal immigrants. Once migrants cross a border into the Schengen zone, they can in theory be given papers allowing travel throughout the zone, currently encompassing 25 countries. This happened in Italy this spring, leading to a debate over whether the Schengen protocols need adjustment.

Last year, more than 47,000 irregular immigrants crossed the Evros River from Turkey into Greece, which is a member of the Schengen zone, just a few kilometers south of the Bulgarian checkpoint. The influx has been disastrous for a country already coping with a ruinous public debt.

Doctors Without Borders reports that overwhelmed detention centers along the border house migrants in squalid conditions, without adequate food and sanitation. Greek officials quickly process and release those migrants, with papers either requiring them to leave the country or to wait for a verdict on their asylum applications. Most end up squatting on the streets of Athens.

Could Bulgaria, with its 174-mile long border with Turkey, face the same situation if or when it enters the Schengen area?

Emil Gochev, the officer in charge of border control at Kapitan Andreevo, said "every day we have cases of illegal immigration ... . A few days ago, we had a case of three hidden persons,” hiding in the baggage compartment of a tractor trailer.

“We are not like Greece," he said, but the Bulgarian border control is planning for a crisis situation, expecting that more illegal immigrants will cross into Bulgaria. At the Kapitan Andreevo border point, between 2,000 and 3,000 cars and about 1,000 trucks enter every day.

However, “We are ready for Schengen,” said Gochev. “We have more technical equipment than our Greek colleagues.”

In the nearby village of Lyubimets, the EU has funded the construction of a new detention center for asylum seekers. The Special Home for the Accommodation of Foreigners opened March 15 and currently houses 64 migrants, including seven children. With a capacity of 312, it employs 157 people, among them officers, cooks, cleaners, a dentist and a doctor. The new facility includes separate prayer rooms for Christians and Muslims, a library, a nursery, medical offices and a cafeteria.

EU law requires migrants to apply for asylum status in the first member state they enter. That is why some try to evade the law and travel further into the EU, and why others wait in limbo as their applications are processed. During that time, they have no choice but to rely on the state, or beg.

On a sofa in the television room of the Lyubimets facility, two young Syrian Kurdish immigrants say they arrived 54 days earlier.

"Please, I want to go to Sofia," complained a young man named Fatih Muhammad, dressed in a yellow-plaid shirt. His wife, Nalin described their trip to Bulgaria in broken English.

"We walked for two days," she said. "No food, many problems." Her husband's feet were bandaged, several toenails were darkly bruised. He said he suffers from unexplained stomach pains.

“I came swimming,” said 28 year-old Ali Mohamed, who says traffickers took him and 65 others by boat from Somalia toward Yemen. “When you reach a place near the border, they tell you, okay, you start swimming now.” It took him six hours to reach the seaside. Eleven of his fellow passengers died.

From Yemen, he traveled through Saudi Arabia, Syria and Turkey before arriving in Bulgaria. It took nine months.

“All my life I have been running from bullets,” Mohamed said. “Now I've come to a place where I will not run anymore."

But, he wondered, "Why is these camp holding us for three months, four months? We just want them to treat us like refugees, not criminals.”

Officer Svetloslav Dihanov, who oversees the detention facility, said that the government has begun building a facility in Svilengrad, near the Turkish border, to house such migrants, who are awaiting decisions on applications for asylum. That center, as well as an existing facility in Sofia, will allow migrants to come and go as they please. Meanwhile, many wait for months in captivity at high-security centers like Lyubimets, not knowing whether they will be moved, released or deported.

In Schtit, a Bulgarian village of dirt roads, tobacco fields and donkey carts, Bulgarian border guards park their vehicles in the dusty town square. From the village, farmers look across the valley and see two white minarets soaring from a mosque in the Turkish village of Karabulut. Margo Apostolova, 63, who with her husband runs a small market and restaurant, said she knows about illegal immigrants entering their village from the Turkish village on the other side of the valley.

"We still never lock our houses," she said. The border control is here and they catch the illegal migrants and take them to Lyubimets, she explained. Representatives from other countries have come to make inspections and found that things are well controlled and that the border police are doing their jobs, she said.

Her husband, Apostol Apostolov, 65, remembers that during winter, some Arab migrants crossed the border and made a fire inside old, abandoned army barracks. The fire spread and buildings burned down. Still, he said, "I'm not afraid. Those people aren't dangerous. They come to save their lives."

Apostolov said the immigrants are guided to the border, then left to cross and make their way alone, finding their way through the farm fields. Once, he said, he saw a group of 10 illegals walking on the road.

"Sofia, Sofia," they were asking, "but nobody in the village speaks English. The border police came and got them."