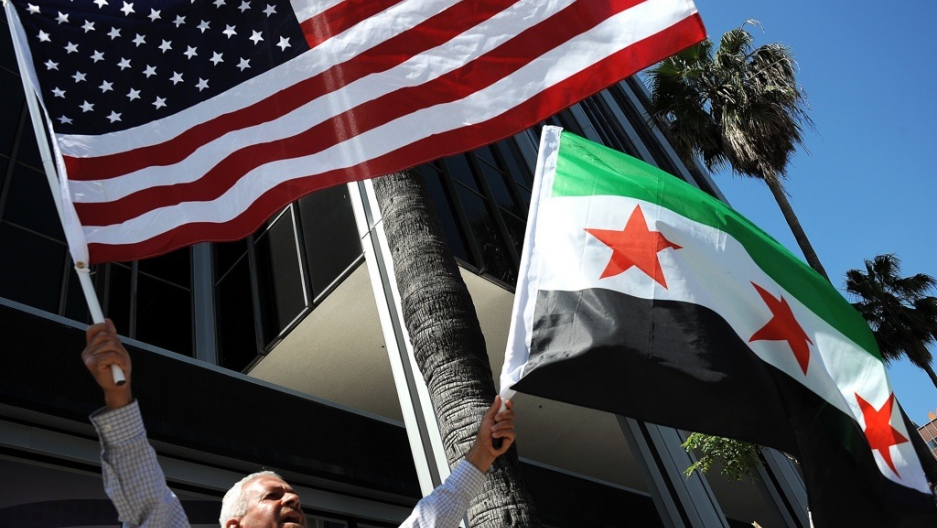 People attend a demonstration to ask for freedom in Syria on June 3, 2011 in Hollywood, Calif.
Credit: Gabriel Buoys
Share

BEIRUT, Lebanon — Sanctions on the Syrian regime are hurting and will likely be expanded, including to oil and gas, diplomats and analysts said, as Western powers move decisively against a president now seen as having lost legitimacy.

It is a policy shift that will likely have lasting regional impacts, including bringing to an end a decades-old strategy of U.S.-backed peace talks between Syria and Israel.

Economic sanctions first imposed by the United States on Syria in 2004 were tightened on May 18 to directly target President Bashar al-Assad, who joined the likes of Omar al-Bashir of Sudan and Robert Mugabe of Zimbabwe as serving heads of state sanctioned for human rights abuses.

Assad’s two security chiefs, Maher, his brother, and Assef Shawkat, his brother-in-law, were already targeted by U.S. sanctions, which freeze any assets under U.S. jurisdiction and ban them from traveling to the United States.

“For a president who sees himself as a world leader it’s an embarrassment and a disgrace,” said an official at the U.S. embassy in Damascus on the impact of sanctions on Assad.

“There are other people who can be targeted. We want the people who are facilitating the human rights violations to stop.”

Both European and U.S. diplomats said targeted sanctions are likely to be expanded to business elites known to be directly supporting the regime, including, for the first time, not only individuals but companies and entities associated with it.

The move is designed to drive a wedge between Assad and Syria’s wealthy elites, particularly the Sunni merchant classes who have so far been pivotal in keeping Aleppo and Damascus, the two main cities, relatively calm.

“There’s been a massive change in Washington with regards to Syria,” said Andrew Tabler, a fellow at the Washington Institute for Near East Policy who was formerly based in Damascus for eight years.

“In the long run there is an agreement that the regime is going down and so everyone is accommodating their Syria policy to that.”

Syria’s strong ties to Iran, including a defense treaty, its support for militant Palestinian groups Hamas and Islamic Jihad and its political and military support to Hezbollah, the Shiite militant group now controlling the Lebanese government, has long left Western policymakers too nervous to apply pressure on Damascus, lest it use its regional proxies to lash out at Israel. That policy too now appears to have shifted.

Tabler confirmed there were serious discussions in Washington about placing sanctions on consumers of Syrian oil and gas, as well as foreign energy companies working in Syria, a boycott that opposition activists claim could starve the regime of up to $8 million a day, money they say goes directly to pay for the security forces leading the brutal crackdown.

“There’s been a lot of push back from Europe because Royal Dutch Shell and France’s Total have considerable concessions in Syria,” Tabler said. “Sanctions are a blunt instrument, but as oil revenue only makes up a third of state revenue, sanctioning them is a useful tool and will not impoverish the Syrian people as it did the Iraqis.”

Relations between Damascus and the West, particularly the United States and France, two key powers with interests in Syria, took a nose dive this weekend after the French and American ambassadors visited Hama to witness the largest anti-regime protests of the uprising so far.

Furious that the ambassadors had travelled without official permission, the regime allowed a mob of Assad supporters to attack the French and American embassies, prompting U.S. Secretary of State Hillary Clinton to say for the first time that America had “absolutely nothing invested in [Assad] remaining in power.”

On Tuesday, U.S. President Barack Obama said Assad had lost legitimacy in the eyes of his people.

“He has missed opportunity after opportunity to present a genuine reform agenda,” Obama told CBS. “And that’s why we’ve been working at an international level to make sure we keep the pressure up.”

He stopped short of calling on Assad to step down, but administration officials quoted in the New York Times said Obama may demand that in the coming days.
President Sarkozy of France called the attitude of the Syrian president “unacceptable.”

“We must strengthen sanctions against the regime, which is applying the most brutal methods against its population," he said Thursday.

In interviews with Western diplomats in Damascus it seemed clear patience with Assad’s pledges to reform has all but run out.

“Every day the regime and the president talk about reforms, but we continue to see actions like night raids, arbitrary detentions and torture, actions that run counter to the reforms the regime has been promising,” said a Western diplomat. “Every day lost damages the president’s credibility further.”

This week’s National Dialogue meeting, billed by Assad as the only means to end the crisis in Syria despite being boycotted by the opposition, was merely “talking about talking,” said the diplomat, with no timetable set for implementation of reforms, such as removing the Baath Party’s constitutional stranglehold over politics.

The U.S. embassy official welcomed the announcement by Syrian Vice President Farouk al-Sharaa, who chaired the National Dialogue, that travel bans on political activists would be lifted, a move that would allow exiled opposition members to return to Syria.

“Now it’s time for the regime to put its money where its mouth is,” said the U.S. embassy official. “They need to allow opposition groups to come and go, to meet freely — and not just for government sponsored meetings — to organize and demonstrate freely. There is still a chance for the regime to create the right circumstances for a credible dialogue to go on.”

Though his Hama trip provoked a furious reaction, the embassy official confirmed that U.S. Ambassador Robert Ford has plans to visit further cities, presumably to see again for himself the protests that are taking place across Syria on an almost daily basis.

Unconfirmed reports suggested Ford would be visiting Deir Ezzour, a sprawling tribal city on the banks of the Euphrates in Syria’s eastern desert, where on Thursday two protestors were killed by security forces.

Like Hama, Deir Ezzour has been largely out of the control of security forces for several weeks, with residents observing a strike, burning all images and statues of the Assad family while the military and secret police remain withdrawn to the edges of the city.

While the hardening of the U.S. position toward Damascus may have been triggered by the attack on the U.S. embassy, the third such incident since 1998, Tabler said America’s relations with the Assad regime had long been souring over its deepening ties to Iran, stoking sectarian tensions in the region, deposing the Western-backed government in Lebanon and transferring weapons to Hezbollah, listed as a terrorist group by Washington.

What kept U.S. pressure tempered, he said, was the old policy of seeking a peace treaty between Israel and the 41-year-old Assad regime in exchange for Damascus decisively breaking its ties to Iran. That policy, pursued to varying degrees by successive U.S. administrations since the 1970s, has now been shelved, Tabler said.

“Peace talks with Israel are over. That option has finished. For any peace talks to go ahead there has to be a legitimate leader, and with such deep internal problems, Assad is not that,” Tabler said.

“The U.S. has every interest in a peace treaty between Israel and Syria, but in the future it will have to be with Syria as a country, not just the Assad regime. You would have to set the bar very low, near the ground, to say the Syrian regime today is in any way in the interests of the U.S.”