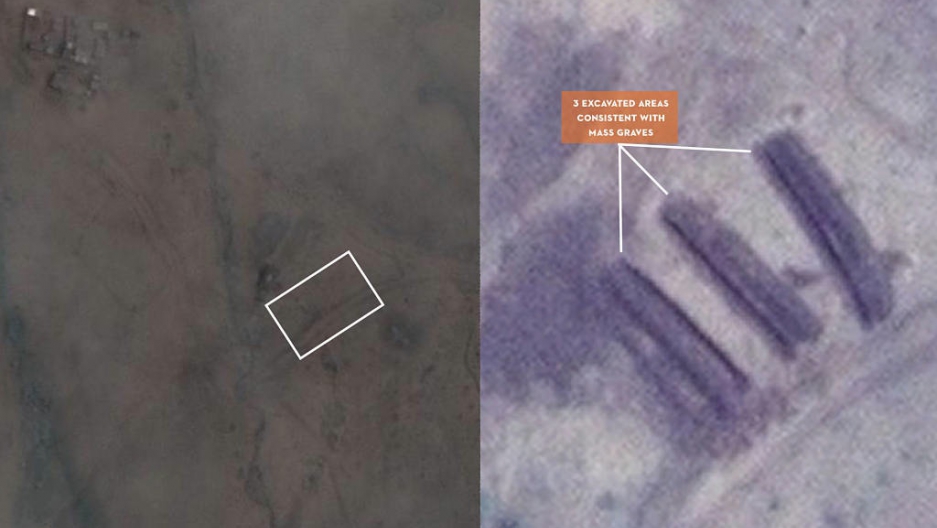 Photos of mass graves in Sudan have been released by George Clooney's Satellite Sentinel Project.

The satelite images of what appears to be fresh graves add to the growing evidence, including accounts reported by GlobalPost, that mass killings and crimes against humanity are being committed in Sudan's South Kordofan province by the the Sudan Armed Forces and the government of Sudan.

The new photos make it more likely that Sudan President Omar al-Bashir, already indicted by the International Criminal Court for alleged crimes in Sudan's Darfur province, will face new charges of crimes against humanity for the alleged killings in South Kordofan.

Clooney's Satellite Sentinel Project today released photos that show mass graves in Kadugli, according to analysis by experts. The satellite images, captured by DigitalGlobe, corroborate recent eyewitness reports of systematic killings in Kadugli by the Sudan Armed Forces and militias aligned with the Sudan government.

Witnesses said that people were rounded up from their homes and driven into the forests by trucks. The trucks later returned empty.

Sudan President Bashir and his government in Khartoum is accused of ordering the killings of ethnic Nuba Sudanese who are suspected of supporting the opposition Sudan Peoples Liberation Movement (SPLM). The Nuba people of Sudan's South Kordofan province supported the independence of South Sudan and now it appears that Bashir's government is punishing them for that position.

Bashir denies the charges, saying that his forces are trying to control violent rebels and to capture the rebel leader.

Kadugli, the capital of South Kordofan province, is where the alleged mass killings have occurred, according to witnesses.

The Sudan government has severely restricted the activities of United Nations agencies and other aid providers in Kadugli and other parts of South Kordofan. Despite the lack of on-the-ground reports from humanitarian workers and journalists, a chilling picture of the killings has emerged from eyewitness reports from those who were in Kadugli town within the past month and the corroborating satellite images.

The first images from the Satellite Sentinel Project show evidence of fresh graves near Tilo Secondary School in Kadugli. The images back up eyewitness claims that the Sudan Armed Forces killed a number of civilians because of their suspected support for the SPLM near the Tilo school on June 8.

The Sudan army troops arrived at Tilo in light trucks with machine guns mounted on the back of the vehicles, according to the witness. Five SAF soldiers allegedly held down one civilian while one of the soldiers slit the civilian’s throat, said the witness. The same witness also reported seeing and hearing Sudan army soldiers seal the doors of houses in Tilo and set the houses afire, burning alive civilians trapped inside.

A second witness, corroborated by DigitalGlobe images, alleges that at least two pits were dug on 8 June less than a half-mile south of the Tilo School in Kadugli and approximately 100 yards from a radio tower. The eyewitness reports seeing a yellow-colored earthmover being driven by someone dressed as a civilian. The vehicle had a “bucket with teeth” on the front of the machine. The bucket could move from side to side, and it would lift up earth and deposit it elsewhere. The eyewitness estimated that the apparent size of the pits measured approximately 10 yards long by 5 yards wide.

By the evening of 8 June, the same eyewitness reports that Sudan army soldiers and apparent government militia, men in brown uniforms consistent with those worn by prisoners at the local prison, and individuals dressed like Sudan Red Crescent Society (SRCS) workers were seen driving in large, green trucks in the vicinity. There are earlier allegations that government intelligence officers had been reportedly posing as Sudan Red Crescent workers near the United Nations Mission in Sudan compound in June. Those agents were reportedly wearing Red Crescent uniforms, including a white apron with a red crescent. Impersonating a Red Cross or Red Crescent worker can constitute a violation of the Geneva Conventions.

Large green trucks were moving back and forth from the site. The eyewitness claims that dead bodies had been picked up from the market area of Kadugli and from El Gardud and Tilo villages in Kadugli around that time. Men at the site were reportedly unloading dead bodies from the trucks and depositing them in the open pits. The individual claims to have seen some bodies in what appeared to be bags that were “white” and “plastic,” others were in light brown bags made of a different kind of material. Some bodies were not in any type of body bag or wrapping.

Sudan army soldiers prevented the individual from getting closer to the site at that time. The eyewitness said that he estimated that 100 or more bodies were deposited at the site on the evening of 8 June.

The individual says that killings have continued in Kadugli town since June 8 and bodies in the town have been collected, but it is unknown where the remains have been taken. There are some bodies, according to the witness, allegedly still present in a forest to the south of Kadugli.

The individual says that killings have continued in Kadugli town since 8 June and bodies in the town have been collected, but it is unknown where the remains have been taken. There are some bodies, according to the witness, allegedly still present in a forest to the south of Kadugli.

Some of the vehicles driven by the Sudan army and militias, according to two witnesses, include white-colored light vehicles, such as land cruisers, and white-colored Mitsubishi trucks. The vehicles described as “Mitsubishi trucks” or “dump trucks” have been reportedly used to collect dead bodies in Kadugli town proper.
One witness claimed that the militia forces put dead bodies, in some cases, in what appear to be white plastic tarps or other body bags. Another eyewitness alleges that people were taken and killed by SAF troops and police officers in front of their houses near the Episcopal Church of Sudan (ECS) around June 6 or 7 June. On approximately June 7 or 8, the witness saw what he called white “Mitsubishi trucks” picking up bodies south of the ECS guest house in Kadugli.

The satellite images show dozens of white-colored light vehicles in areas throughout Kadugli on July 4. Heavy trucks consistent with white-colored transport trucks are visible as well. These vehicles appear consistent with Sudan army and government military vehicles previously observed by the satellite project at government encampments and those described by multiple eyewitnesses as being present in Kadugli town.

A satellite image taken on July 4 shows a pile of white bundles clearly visible in Kadugli town near the Episcopla Church facilities, just south of the church and guest house. White-colored vehicles consistent with those used by Sudan army and militia are present in that area. Tracks consistent with the presence of heavy vehicles is visible there as well.

The satellite project concludes that the presence on July 4 of apparent Sudan army and militia vehicles in residential areas corroborates reports that Sudan army and government-aligned militia are systematically searching homes. The presence of white bundles just south of the Episcopal church guest house is consistent with the allegations that bodies have been placed in tarps or bags of some sort near the Episcopal church facilities, corroborating claims that SAF troops are systematically hunting and killing civilians.

This project is the result of an unprecedented collaboration between Not On Our Watch, the Enough Project, Google, DigitalGlobe, the Harvard Humanitarian Initiative, and Trellon.

The project works like this: Commercial satellites passing over the border of northern and southern Sudan are able to capture possible threats to civilians, observe the movement of displaced people, detect bombed and razed villages, or note other evidence of pending mass violence.

Google and Trellon design the web platform for the public to easily access the images and reports. Harvard Humanitarian Initiative provides system-wide research and leads the collection, human rights analysis, and corroboration of on-the-ground reports that contextualizes the satellite imagery. The Enough Project contributes field reports, provides policy analysis, and, together with Not On Our Watch, and Sudan Now partners, puts pressure on policymakers by urging the public to act.

The Satellite Sentinel Project marks the first sustained, public effort to systematically monitor and rapidly report on potential hotspots and threats to security along a border, in near real-time (within 24-36 hours), with the aim of heading off humanitarian disaster and human rights crimes before they occur.