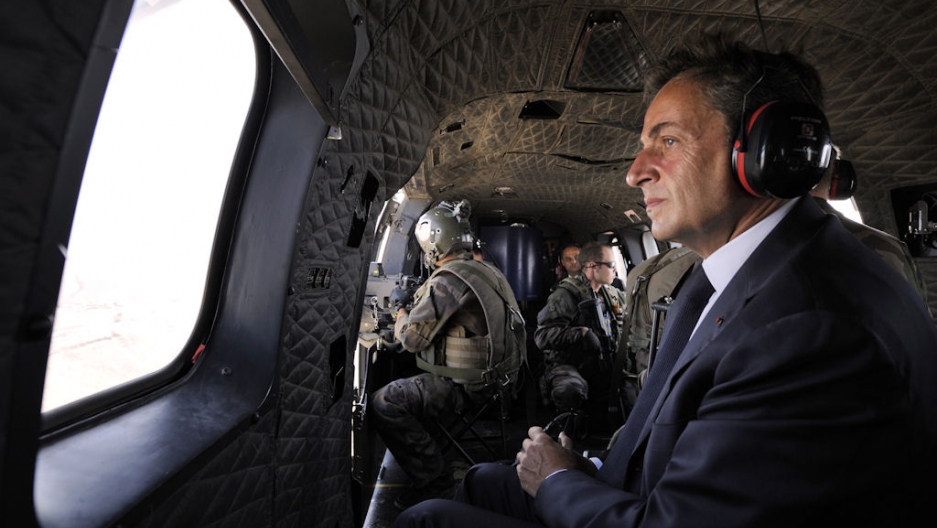 French President Nicolas Sarkozy flies aboard a helicopter from Kabul to the 152nd Infantry Regiment military base in Tora, Afghanistan on July 12, 2011 during a surprise visit to meet troops stationed in Sarobi district, northeast of Kabul.
Credit: Philippe Wojazer
Share

PARIS, France — Nicolas Sarkozy, with less than 10 months to judgment day, needs all the July 14 grandeur he can get in his all-out campaign to “represidentialize.”

Here, that’s a word. France chooses presidents to reflect its self-image, elected monarchs who beam light to the world. Sarkozy, as his first term wanes, risks ending up as a flash in the pan. As jets spew blue, white and red smoke over today's Bastille Day parade, the part-populist, part-playboy “hyperpresident” needs to display a convincing metamorphosis.

Dominique Strauss-Kahn is sidelined in shame, but polls say two Socialist also-rans — and perhaps even Segolene Royal, who lost in 2007 — could skunk Sarkozy. An Ipsos graph of his approval ratings drops like a Val d’Isere ski run, from 65 percent four years ago to 20 percent in May. Others, if less dire, back that trend.

Jacques Chirac, in a blunt and best-selling memoir, gets Sarkozy right: “High-strung, impetuous, with overflowing ambition, second-guessing nothing — certainly not himself.”

The president’s handlers are scrambling to add grandeur to that picture, depicting him as a world-class statesman with the courage to fight for French ideals.

The Sarkozy who never let a microphone or camera lens go to waste now keeps silent, standing in the shadows until he can seize the moment on his terms. A recent photo evokes a Charles de Gaulle in miniature, prominent nose cocked skyward to cast a shadow over a benighted globe France has civilized over centuries.

Aiming for those loftier heights, he forewent proud-papa banter when France learned that first lady Carla Bruni was pregnant.

In fact, Sarkozy has substance to offer. As an analysis in The Economist concluded, it would be a mistake to count him out. Socialist frontrunner Martine Aubry was a middling labor minister who gave France its controversial 35-hour workweek. Contender Francois Hollande has never been in a cabinet.

But a wildcard skews the picture. Marine Le Pen, more housebroken than her bullying and blustering father, leads the far-right National Front. Factions could rally behind Sarkozy to thwart the Front, as happened for Chirac in 2002.

With all the euro zone turmoil, France’s economy is sound. Its GDP is expected to grow 2.1 percent in 2011, higher than official forecasts. Sarkozy announced a 35 billion euro ($49 million) investment in research and technology, looking ahead to a stronger France in 2030. Such grand themes underpin his speeches.

He also makes use of France’s military might. When Libyans arose, he rallied Britain to join in air support while Barack Obama waffled in the background.

This month, Sarkozy popped up in Afghanistan. He declared future victory so troops could come home as scheduled. Shunning a costume flak vest, he wore his habitual well-cut dark suit.

Beyond all that, this is France. Thinly drawn party lines are easy to cross. The campaign is quick and clean, and no party is allowed to spend much money.

There is little media circus. During crucial Strauss-Kahn developments, only a single TV truck, from Canal Plus, parked outside Socialist Party headquarters.
In the end, what matters is who seems most presidential.

Polls are notoriously unreliable, but a Harris survey caught the mood: 28 percent of respondents said they wanted Sarkozy to be president; 57 percent expected him to win.