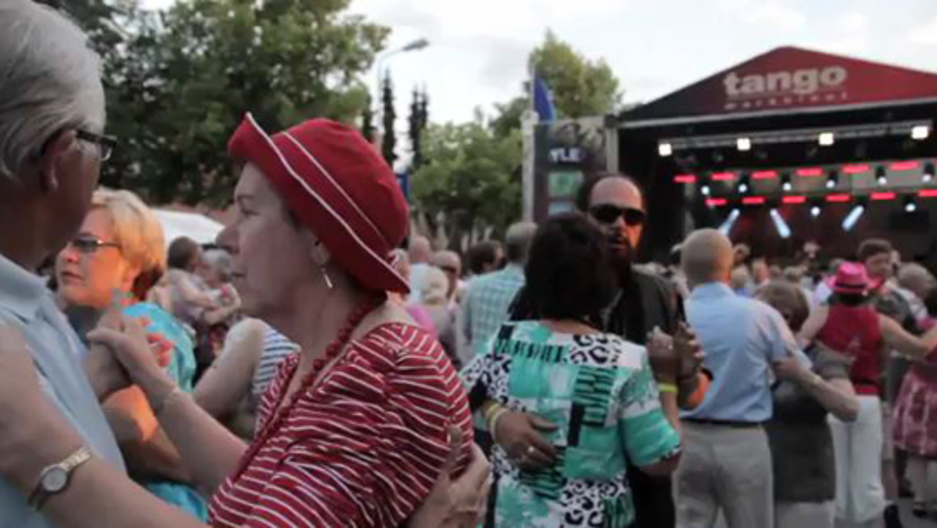 Share
At 10:30 pm on a warm July evening, the sun was still well above the horizon in SeinÃ¤joki, Finland. The "nightless night," as it's known, served as the backdrop for the annual SeinÃ¤joki tango festival. An estimated 100,000 people had gathered for five days celebrating the Finnish affection for tango. "Tango" likely evokes a sensual, Argentinian dance form to you. But in Finland, tango is about music, with lyrics rooted in Nordic nature rather than urban Buenos Aires. The Finnish love for tango culminates on the last night of the festival, with a tango singing competition in which the country crowns it's only royalty: the king or queen of tango. This year's queen is Mervi Koponen. She is a 35-year-old auto mechanic by day and amateur songstress by night. Winning in SeinÃ¤joki can be a career changing moment for Finnish tango artists. True testament to the role of tango in Finnish society can be found in Justice Minister Anna-Maja Henriksson's opening statement at this year's finals. "Dear friends of tango," she announced. "This is more than an annual tradition in Finland. As Justice Minister, I would say that tango and the tango festival is part of our basic rights as Finns. Tango made its way from Argentina to Finland in the 1930s. Soon after, lyrics about urban, Buenos Aires were replaced with ones that better reflected the environs of northern Europe and the melancholic mood of a nation at war with the Soviet Union. However, those who associate tango with drama and passion may find it hard to imagine it as a national obsession for the famously introverted Finns. An old joke says it best: How do you know if a Finn is outgoing? The answer: he's looking at your shoes instead of his own. Tapani Kangas was one of this year's finalists in SeinÃ¤joki. Kangas considers himself a rock musician, but he quickly took to singing tango when he discovered his dad's collection of Finnish tango records. "Then I just fell in love with tango. It's about passion, heart, soul, combined as one big ball of emotion," he said. Kangas said that the emotional depth of Finnish tango music offers a way to break the cultural ice when it comes to romance. "Basically, we are very shy. For a Finnish man," Kangas explained, "it's easier to get close to the women when there's this music involved." Martti HaapamÃ¤ki heads up this year's tango jury. In a society where verbal restraint is valued over small talk, HaapamÃ¤ki said that tango allows Finns a form of expression that goes beyond words. "When singer says 'I love you,' you can have the message without talking," he said. "It's so full of feeling." Finnish tango music is a slower, minor key cousin to the Argentine version, featuring mournful lyrics about paradise lost and unrequited love. A song titled Satumaa is considered the quintessential Finnish tango. In it, the singer croons about a fairytale land reached only in his mind. Satumaa was made into a hit in 1962 by Finnish tango star Reijo Taipale. Now 71 years old, Taipale regaled crowds in SeinÃ¤joki with the following rendition of the song. Reijo Taipale performed Satumaa in a film called Match Factory Girl by acclaimed Finnish director, Aki KaurismÃ¤ki. KaurismÃ¤ki once declared that in Finland, "Nobody is happy." According to the World Health Organization, Finland's suicide rate remains the highest in Western Europe. Yet Finland also ranks high on surveys of happiest countries, coming in second in last year's Gallup World Poll on happiness. To tango finalist Tapani Kangas, this contradiction is best explained by the contrast between summer and winter in this part of the world. "There are two seasons in Finland, there's winter and summer. People are waiting for the summer, and when they realize that now the summer is here, we have to be happy," Kangas joked. Six months from now, Finland will be submerged once again in wintry darkness. But on a warm evening like this, the fairytale land of Finnish tango songs doesn't feel so far away.