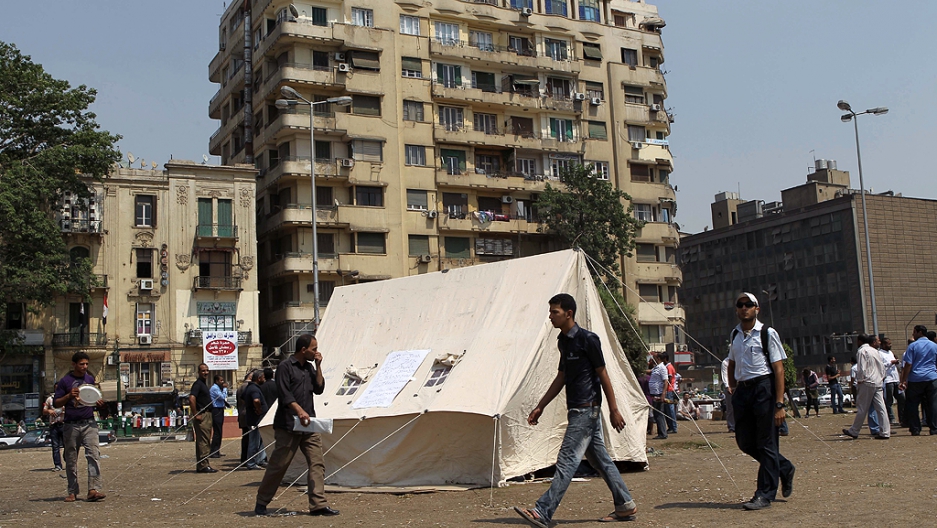 Egyptian pro-democracy activists set-up a tent at Cairo's landmark Tahrir Square on June 30, 2011 as they push for political reforms and to demand that officials found guilty of abuse be brought to justice, a day after violent clashes in the square which was the epicentre of protests that toppled president Hosni Mubarak.
Credit: KHALED DESOUKI
Share

Thousands of Egyptians continued their anti-government protest in Cairo's Tahrir Square on Thursday, calling for greater political reform and the swifter and more transparent adjudication of the former president, Hosni Mubarak, and his allies.

Demonstrators have now been holding an extended sit-in near Tahrir for six straight days, largely undeterred by Egypt's scorching summer heat and humidity.

Before Egypt's revolution, Cairo's central traffic circle was known more for gridlock and the incessant cacophony that came with it.

Today, however, Tahrir has almost become a pedestrian-friendly city within a city, where protesters, twitterers, academics, vendors, and even the occasional tourist can mingle and debate politics and democracy until the wee hours of the morning.

But how do thousands of people simply move in and set up shop in the middle of downtown Cairo, the largest capital city in the Middle East?

How can protesters manage to live out in the open with the sweltering heat? Where do they get their food? How do they charge their mobile phones? Who is running security in Tahrir? Do protesters have access to television?

And perhaps most importantly - where do people living in Tahrir go to the bathroom?

Check out this great video by Simon Hanna, a journalist at Egypt's state-funded Al-Ahram newspaper, to learn the answers to most of those important questions.