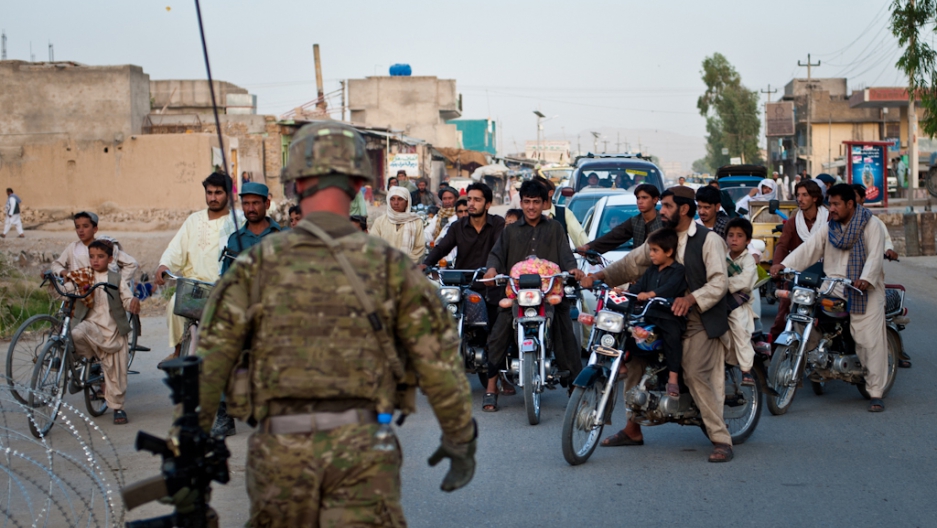 Traffic checkpoints are a fact of daily life in Kandahar City, but they have become more common since Ahmed Wali Karzai's death on July 13.
Credit: Ben Brody
Share

KANDAHAR CITY, Afghanistan — In the wake of Tuesday’s assassination of Ahmed Wali Karzai, the president’s half brother and the most powerful man in Kandahar, and Thursday's suicide bombing of a mosque where his service was being held, U.S. and Afghan forces in Kandahar City are on a heightened state of alert.

Throughout the city, which on a normal day is peppered with checkpoints and patrols, there is now an endless stream of military and police vehicles on the move and helicopters buzzing overhead.

When asked about the power vacuum created by the Kandahar strongman's death, Afghan Police Col. Sayeed Gulabshah sighed and said, "It is natural in the story of people that we fight for power — we are all waiting to see what will happen."

Gulabshah is the charismatic and influential commander of Kandahar City's Police Substation 1, which is responsible for the district where Karzai was killed. He said he plans a run for national parliament next year.

"If you have good governance, you will have peace," Gulabshah said.

(GlobalPost in Kabul: The myth of Afghan democracy)

In the hours after the assassination, soldiers at Camp Nathan Smith in Kandahar City frantically dashed back and forth between helicopters, gun trucks and meetings. They were preparing for President Hamid Karzai's arrival. But he flew directly to the funeral instead.

After the funeral, the sky went dark with an unusual sort of procession — a motorcade of helicopters. The presidential entourage numbered in the hundreds, and helicopters could be seen over the city in groups of four to six for nearly two hours.

Reuters reported two blasts in the city Wednesday, but local military sources said they were routine demolitions of captured weapons. Although palpably tense, Kandahar City has thus far not erupted in violence.

The real power vacuum is yet to come.

Local police commanders expressed far more concern over the impending withdrawal of U.S. forces from Afghanistan than they did over Karzai's death.

"Since I have been a police officer, many powerful people in Kandahar have been assassinated, like my uncle (the late provincial chief of police Khan Mohammed)," said 2nd Lt. Nooradin, a burly former mujaheddein who commands a police checkpoint in Kandahar City. "Despite these deaths, we move on. But without American supplies, (the police) will not be able to work."

Nooradin, who like many Afghans goes by a single name, said he fought against the Russians in Kandahar's Arghandab District in the 1980s. He describes the Russian withdrawal from Afghanistan as "the happiest time in my life."

Like many security officials in Kandahar, including the late Karzai, Nooradin has been investigated by the U.S. military for corruption and drug dealing. Ultimately, the investigators did not discover enough evidence and the matter was dropped, according to 1st Lt. Nick Zappone, who works with Nooradin.

Power in Kandahar is intrinsically linked to its main export — heroin derived from the province's opium poppies. Involvement in the trade is essentially a given for Kandahar City's power brokers, but the violence and instability associated with heroin trafficking is tempered by a massive American and Afghan security presence.

Without American troops to train Afghan police and provide them supplies, Gulabshah said he fears a wave of violence in Kandahar City.

"I don't know if we will continue to have American support in the future," Gulabshah said. "If we do, we can keep the Taliban out and have peace.”

Soldiers from 202nd Military Police Company are more optimistic. They have lived at Police Substation 1 with their Afghan police counterparts for the past 11 months and say they have witnessed a great deal of change.

From his rooftop vantage point as a tower guard, Spc. Brad Prater said vehicular traffic, especially at night, has increased tenfold in the past year. He said he sees it as a sign that people are coming back into the city because of better security.

While Kandahar City is not gripped by the daily carnage that plagues some outlying districts, the Taliban occasionally demonstrate an ability to stage what the military refers to as spectacular attacks.

The soldiers from the 202nd know this all too well — on May 7 their substation was attacked as part of a coordinated assault on the city's security strongholds. From a neighboring schoolhouse, a nine-hour barrage of gunfire and rocket-propelled grenades rained into the substation, as soldiers and police poured machine gun fire, grenades and rockets back into the school.

During the battle, an Afghan police officer named Ali Ahmad snuck into the schoolhouse and stole the Taliban's crate of grenades. When the dust cleared, two Taliban fighters were dead and an unknown number fled. One U.S. soldier was hurt and two Afghan police officers suffered serious gunshot wounds.

"We've bonded really well with the ANP unit here," Zappone said. "Some of the (Afghan police) officers said they're going to quit when we leave."

Those plans were not exactly echoed by Zappone's counterpart Gulabshah, who said, "As long as I'm alive, I will be a police officer.”

While there are areas in nearby Zhari District where soldiers will invariably be attacked, Zappone said his soldiers can go where they please.

"There's no terrain that the enemy controls," Zappone said of District 1, which encompasses about six square kilometers and is home to an estimated 250,000 people. "Our checkpoints come under attack so we know they're pissing the Taliban off — they really want us gone."

In a few weeks, they will be — Zappone and the rest of 202nd will introduce a new American military police unit to District 1 and head home to Fort Bliss, Texas.

And in about three years, they will all be gone.