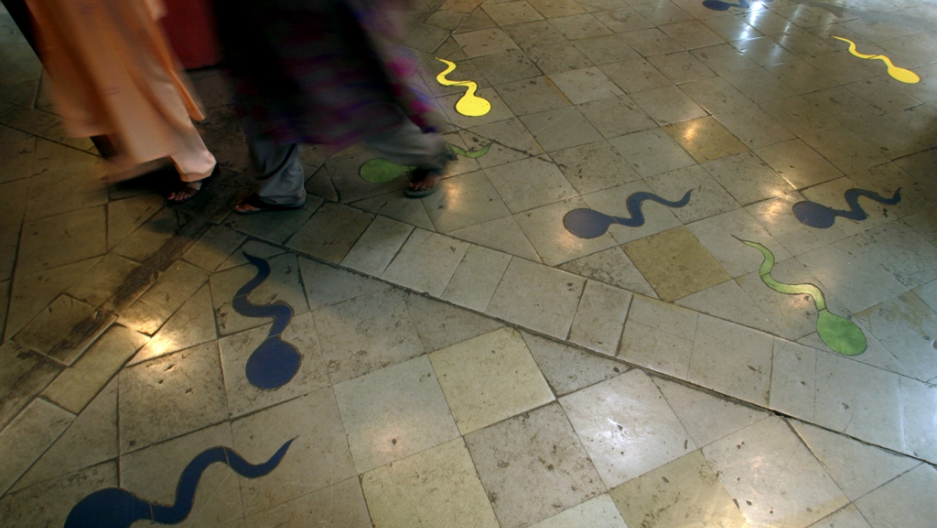 NEW DELHI, India — About 400 years ago, a bright spark came up with the idea to sheath his sword in a piece of sheep's intestine.

And the condom was born.

Since then, male birth control has mostly been tinkering with this initial design. Until now.

After a more than 30-year struggle, an unassuming Indian engineer named Sujoy K. Guha is on the brink of what could well be the most revolutionary contraceptive technology since the pill — and this time it's for men.

Called RISUG, which stands for "reversible inhibition of sperm under guidance," it essentially offers men a surgery-free, injectable vasectomy, which is good news in itself.

Better still, research on animals, including monkeys, has shown that this vasectomy is easily reversible. So what you get is a one-time, hormone-free sperm blocker that you can turn off whenever you want.

The impact could be huge for India, where sterilization is still the most often used method of birth control.

No wonder the drive to convince men to get conventional vasectomies is so intense that states like Rajasthan have offered cars, motorcycles and TV sets — not to mention gun licenses — as incentives to undergo the procedure.

"The fact that it does not involve cutting a body part and throwing a piece away carries a lot of psychological impact," Guha said. "That is one of the very major appeal points of RISUG. The second, of course, is the potential of reversal."

Guha's injectable vasectomy is not quite ready for prime time. But after laboring in obscurity for decades, the Indian scientist is now getting close to the finish line.

Stage three clinical trials — i.e. testing on people, not monkeys — are already underway in India. Some volunteers have been using the new form of birth control without a hitch for 15 years. The treatment could be available in limited release as early as 2012, though reversibility has not been established by human testing yet.

And thanks to an unusual alliance between Guha and Elaine Lissner, a San Francisco-based activist who has been pushing for better contraception for men since the 1980s, RISUG may also be coming to your U.S. doctor's office one day soon — under the trade name Vasalgel.

"In 2005, I got the chance to lead a small foundation and put some money towards what we'd been talking about all these years — to actually do something about it!" Lissner said via email.

"The foundation doesn't have a lot of money — just enough to do the first studies and show that it really works. But RISUG is so far advanced," she said. "It's the only non-hormonal method that's already been in use by hundreds of men — that it seems like a crime to ignore it."

As a result, even as RISUG clears the final hurdles for a commercial launch in India, Lissner's Parsemus Foundation is scaling up production of Vasalgel and preparing for preclinical trials in the U.S. The expectation is that the first U.S. clinical trials could begin as soon as 2012, though the foundation needs at least another $4 million in funding to shepherd the treatment all the way through the approval process.

Despite the remaining obstacles, Guha couldn't be happier.

"When I proposed this idea, I was laughed at and ridiculed," he said in a telephone interview with GlobalPost. "So it gives me a kind of good feeling that the concept may finally lead to some practical product."

It's been a long haul. In the early '70s, Guha was working on a project to kill the dangerous microbes in well water using a material that created an electrical charge in the pump mechanism.

When the government's family planning drive prompted him to focus instead on birth control, it occurred to him that the same principal could be applied inside the vas deferens — the vessel that's normally snipped in a conventional vasectomy.

It didn't take him long to discover that a polymer called styrene maleic anhydride, or SMA, would adhere to the walls of the vas deferens and create a positive electrical charge that zapped the negatively charged sperm as they passed through the vessel — killing or immobilizing them.

But proving that the treatment is safe and effective has been a long, arduous process of trial and error, hampered by bureaucratic sloth and a pathetic budget.

"We had no support from industry," Guha said. "And basically neither I nor my colleagues were really knowledgeable and experienced with respect to new drug development."

Part of the problem was the elegance of Guha's design, which from a marketing perspective was, frankly, too effective.

"Pharmaceutical companies have no incentive to develop a cheap long-lasting method, and we can't expect them to take the lead. Men will get one if, and only if, they demand it of their governments," she said.

Not if Guha has anything to say about it. Having confirmed to his own satisfaction that the "injectable vasectomy" works and will also be reversible, he's now working on adapting the technology to provide additional benefits aside from contraception, so that more men would opt for the procedure.

At the top of his list are some very heavy hitters: HIV/AIDS and prostate cancer.

Guha believes the same gel used for RISUG can be used to deliver one of the most promising drugs in the fight against prostate cancer directly to the gland — eliminating the large doses and unpleasant side effects when it is taken orally.

Similarly, he proposes that at a lower dosage than the one used for contraception, the gel may be able to zap HIV so that men infected by the virus can ensure that it won't be passed on to their children or their partners.