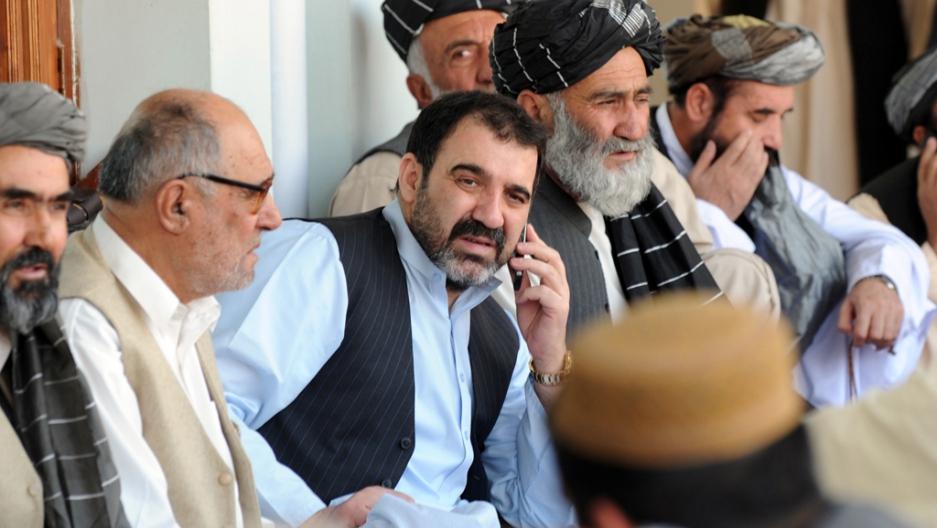 Ahmed Wali Karzai (C) talks on the phone as he sits with supporters celebrating the re-election victory of his brother President Hamid Karzai in Kandahar on November 3, 2009.
Credit: Banaras Khan
Share

“We make heroes of our leaders only when they are dead,” sighed a young Afghan businessman who runs a risk assessment company in Kabul. He was speaking over a month ago, long before Ahmed Wali Karzai, the president’s half brother, was shot to death by his own bodyguard in Kandahar on July 12.

The “hero” he was lionizing was General Daud Daud, the controversial head of the Northern Police Zone, who was killed in a suicide attack on May 28 in Takhar province. Long rumored to be a drug-runner and a thug, Daud was prized by the Afghan government and the U.S. military for one thing: he fought the Taliban and maintained order in a volatile section of Afghanistan.

With AWK, as he was widely known, the situation was similar. There are few who doubted the allegations of corruption that swirled around the president’s half-brother. Those who reaped lucrative contracts from the foreign military in the south would say, privately, that nothing got done without an AWK sign-off, and, of course, a healthy kick-back.

There is little room for doubt on his drug connections, as well. In October, 2008, the New York Times published an extensive article outlining the case against AWK, with quotes from high-level officials supporting the claim.

But Ahmed Wali was the strongman of Kandahar. He was also, according to numerous reports, on the CIA payroll, a man who willingly cooperated with the United States and who knew how to curry favor.

AWK emphatically denied all allegations, including the CIA connection, saying that his political enemies were behind them. His brother, President Hamid Karzai, also defended his younger brother, repeatedly demanding that accusers provide proof or withdraw their charges.

Those who spoke up were often threatened, arrested, or worse. Journalists in Kandahar lived in fear of the powerful Karzai, and, according to the New York Times article cited above, those willing to speak openly about his drug connections ended up in jail or dead.

But Karzai ran Kandahar with an iron fist, and promised a tough line on the Taliban. As head of the Provincial Council, his power should have been fairly limited. But he completely overshadowed the governor of Kandahar, Tooryalai Weesa, and was commonly referred to as the “king” of Kandahar.

Weesa himself did not seem to mind. On Tuesday he delivered an effusive eulogy for AWK, calling him a “true Afghan patriot” who had been “martyred by the enemies of Afghanistan.”

“He is carrying on as if Abe Lincoln has died,” said one international contractor sourly.

AWK was not a great man; he may not even have been a good man. But his death has left a gaping hole at the center of U.S. policy in Afghanistan. Kandahar is the symbolic heart of the insurgency, and has been the focus of much of the military surge that is credited with turning the tide of the war.

With the imminent withdrawal of a significant contingent of U.S. forces, and the promise of a larger drawdown to come, it becomes increasingly important to maintain the narrative of progress, albeit “fragile” and “reversible,” that the U.S. administration has been promoting.

The U.S. is adamant that it will not run away from Afghanistan; this is no defeat, we are constantly reminded; this is a victory for ourselves and for the Afghan people. We are training Afghans to look after themselves, to assume responsibility for their own governance and security.

But on Tuesday in Afghanistan it was not victory that was in the air. Kabul was locked down, with beefed-up security checkpoints throughout the city. Kandahar, which is hosting Ahmad Wali’s funeral, was a virtual fortress, as the president and many top-level politicians headed south.

The Taliban have claimed responsibility for the assassination. This is hardly surprising, since the insurgents have been intent on creating psychological pressure on both the Afghan government and the international forces.

A string of high-profile assassinations and attacks – the killing of Kandahar’s police chief in April, the attack on the Ministry of Defense that same month, and, of course, the killing of Daud in May – have made it clear that no prominent figure is safe.

Many doubt that the Taliban were actually behind AWK’s assassination; his death at the hand of Sardar Mohammad, a close family associate, has more the ring of a personal dispute.

Members of Parliament from Kandahar were divided in their opinions.

“Ahmad Wali Karzai was mistreating other tribes and his long-time bodyguard killed him,” said Shakiba Hashimi. She pointed to the tight security around Karzai’s Kandahar compound, saying it was impossible that the Taliban could have penetrated the various layers.

But Haji Mohammad Omar Nangyalia, another MP from Kandahar, disagreed. He said that Karzai was killed by those who wished to torpedo the peace process.

“Ahmed Wali Karzai was killed by the enemies of Afghanistan,” he said. “He was a prominent figure and a strong supporter of the peace talks in the south.”

The Afghan government refuses to speculate on who was behind the killing.

In the end, it may not matter. Whether the Taliban are making good on their claims to have penetrated the highest levels of the Afghan government, or whether that same government is in such disarray that one of its scions can be picked off at will, the killing of Ahmed Wali Karzai has made one thing very clear: the situation in Afghanistan is deteriorating by the day.

“It is quite hopeless,” said a foreign security expert, speaking on condition of anonymity.

Security is worsening all over the country, even in areas that were once considered safe. Armed gangs known as the Afghan Local Police (ALP), trained and funded by the U.S. Special Forces are terrorizing the local populations, setting the scene for the kind of backlash that gave rise to the Taliban in the first place.

The Afghan people are losing faith in their government; corruption has become so endemic that not even the Kabul Bank scandal, in which more than $900 million was given in unsecured loans to political insiders, raises eyebrows any more.

Afghanistan has become a narco-state producing up to 90 percent of the world’s heroin. And the United States, along with many of its allies, has been turning a blind eye in the name of the fight against the Taliban.

“We have had to get into bed with some pretty bad characters in the name of counterinsurgency,” said an agent of the Drug Enforcement Agency, speaking back in 2007.

One of those strange bedfellows was AWK, dead on Tuesday at the age of 50. He will be mourned by some, reviled by others. There have even been remarks from some unnamed U.S. officials that his removal from the scene may make things better.

This is unlikely. Precipitous change in Afghanistan is so rarely an improvement. Instead, the death of the president’s brother will create a power vacuum that could quite possibly be filled by someone even worse.
As Afghanistan slid slowly into panic on Tuesday, many Afghans were looking ahead to a very gloomy future.

“I can smell war in the air,” said one young Afghan writer, who spent the civil war years in Kabul. “I have smelled it before, and I know what it feels like. It is coming.”