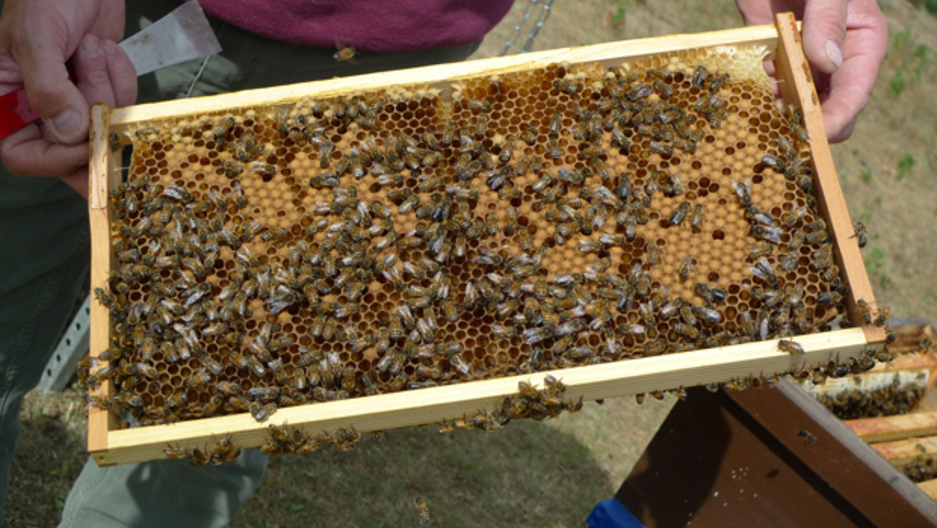 Traffic is growing fast at Germany’s Frankfurt Airport. More than 53 million travelers and over 2.3 million metric tons of cargo passed through here last year. That’s a lot of planes, not to mention cars, buses and trucks, all potentially emitting a lot of pollution.

But in a cargo area a few hundred feet from the runways, the smoke in the air is being produced by Master Beekeeper Matthias Ullmann. Ullmann is using the smoke to pacify the residents of 12 colorfully painted hives — apian sentinels in the fight against pollution. He’s part of a team of researchers from Goethe University’s Institute for Apiculture that’s been running a biomonitoring study here since 2006.

Environmental scientists around the world have long used specially-designed instruments to collect data on pollution levels. But it turns out that plants and animals already collect a lot of environmental information as they gather air, water and nutrients. And the study here at Frankfurt Airport is among a growing number of projects around the world that use some of these living creatures to track environmental problems.

Goethe University professor Bernd Grunewald says the project is based on the assumption that bees are very good indicators of pollution. As they flit about collecting pollen and nectar from flowering plants, they also collect any pollutants that may have settled onto the plants from the air or been drawn up from the ground.

And unlike other biomonitoring projects using living organisms, which are often confined to a few plants or animals in a single spot, Gruenewald says that the more than 300,000 bees here cover some 50 square kilometers (approximately 31 square miles) around their hives and produce a huge amount of material to sample — up to 650 pounds of honey a year.

Gruenewald says the researchers sample the honey for heavy metals like lead, nickel, copper, zinc and cadmium, as well as pollutants like polycyclic aromatic hydrocarbons.

That’s good news for airport officials. The bee study is part of a much wider environmental initiative at Frankfurt airport, including the construction of what officials call an eco-terminal, plans to cut CO2 emissions by 30%, and an array of instruments around the airport to check on air quality, ground water, sewage, and noise. Airport Vice president for environmental management Peter Marx says the biomonitoring project brings these sustainability efforts down to earth.

“Biomonitoring is something which is really close to people’s minds,” Marx said. “They will understand that flowers are dying, or why flowers are not dying. That’s why we use bees to show that bio-monitoring is supporting the results of our measuring stations.”

Those other results also indicate that pollution levels at the airport are low. So low, in fact, that officials at the airport say the honey from its beehives is safe to eat. Which of course is a PR boon.

“If the honey from the airport is of good quality, then we can say the quality at the airport in general is very fine,” Marx said.

But professor Grunenwald from the Institute for Apiculture isn’t sure it’s that simple. He says his researchers were puzzled by the low pollution levels found in the bees’ honey and pollen.

As a control for their study at the airport, Gruenewald’s team also uses bees to collect samples near a busy highway and in the mountains. And contaminant levels are the same in all three places.

Gruenewald says that result might reveal more about bees themselves than about pollution levels. He speculates that the bees may retain foreign substances in their stomachs, or expel them into their wax rather than with their honey.

Gruenewald says the researchers now plan to test the bees’ wax for fat-soluble chemicals that don’t show up in honey. And starting next year, he says, they will use a new method to press the bees for a little more information.

“We can sample the honey stomach content by pushing the abdomen. And then she regurgitates the content. And then she will survive.”

In the end, the researchers may find that bees are effectively filtering chemicals through a built-in detox system in their bodies. That would be a rather exciting discovery about bees. But it might mean that their value as biomonitors would have to be reevaluated.

Despite the questions, these biomonitoring studies retain their buzz, and are catching on across Germany. Six other airports in the country have their own apian biomonitoring projects, and a new one launched in Berlin just this spring.