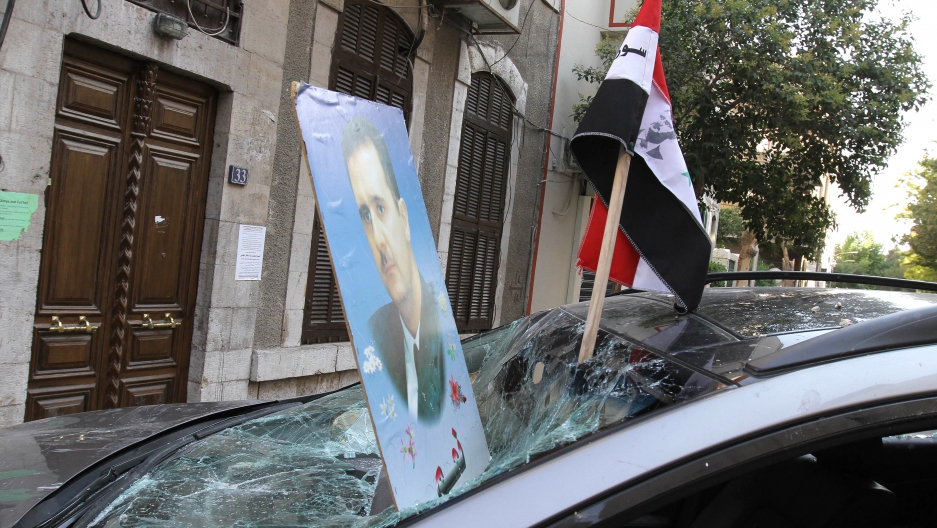 Pro-regime protesters planted the image of President Bashar al-Assad and the Syrian flag through the windscreen of a damaged vehicle as they gathered outside the French Embassy in Damascus on July 11, 2011
Credit: LOUAI BESHARA
Share

In a statement of remarkable candour for a serving ambassador, Robert Ford, the US ambassador to Damascus, has compared the peaceful treatment he received during a protocol-busting trip to protests in Hama last Friday with the state-sponsored trashing of the American embassy, directly challenging the Assad regime’s rhetoric.

“On July 9 a “mnhebak” group threw rocks at our embassy, causing some damage. They resorted to violence, unlike the people in Hama, who have stayed peaceful,” wrote the ambassador, in a post on the US embassy Facebook page. ‘Mnhebak’ refers to the Arabic word for ‘we love you’, the name given to pro-Assad demonstrations.“Go look at the Ba’ath or police headquarters in Hama – no damage that I saw.”

Hundreds of Assad supports smashed windows at the American embassy Monday, raising a Syrian flag in the compound and spraying graffiti on the wall calling Ambassador Ford a “dog” in response to his visit to Hama last Friday. Ford’s residence was also attacked.

Pro-regime supporters also attacked the French embassy, whose ambassador accompanied Ford on the trip to Hama. Both countries criticized Syrian security forces for doing little to stop the attacks. In the US embassy, Marines were forced to step in, warning the crowd to withdraw, which they did. At the French embassy, guards fired warning shots into the air.

Damascus, always tightly controlled, is under intense security measures and no demonstrations could have taken place so close to the embassies without a green light from Syria’s security establishment.

“Other protesters threw eggs and tomatoes at our embassy. If they cared about their fellow Syrians the protesters would stop throwing this food at us and donate it to those Syrians who don’t have enough to eat,” wrote Ford.“And how ironic that the Syrian Government lets an anti-US demonstration proceed freely while their security thugs beat down olive branch-carrying peaceful protesters elsewhere.”

Ford said he had seen no evidence of the “armed gangs” the regime claims are fuelling the uprising. Extra judicial arrests were also continuing despite the pledge Ford noted Assad had made that they would end.

His words of rebuke were soon followed up by stinging criticism of President Assad by Secretary of State Hillary Clinton who, for the first time, said the Syrian president had “lost legitimacy” as a leader interested in reform.

“President Assad is not indispensable and we have absolutely nothing invested in him remaining in power,” Clinton told reporters on Monday. "If anyone, including President Assad, thinks that the United States is secretly hoping that the regime will emerge from this turmoil to continue its brutality and repression, they are wrong."

"These statements are another proof of the US's flagrant intervention in Syria's internal affairs. The legitimacy of Syria's leadership is not based on the United States or others, it stems from the will of the Syrian People," he said.

And maybe that is the point the US ambassador was trying to make when he went to Hama and saw for himself half a million people protesting against the regime.