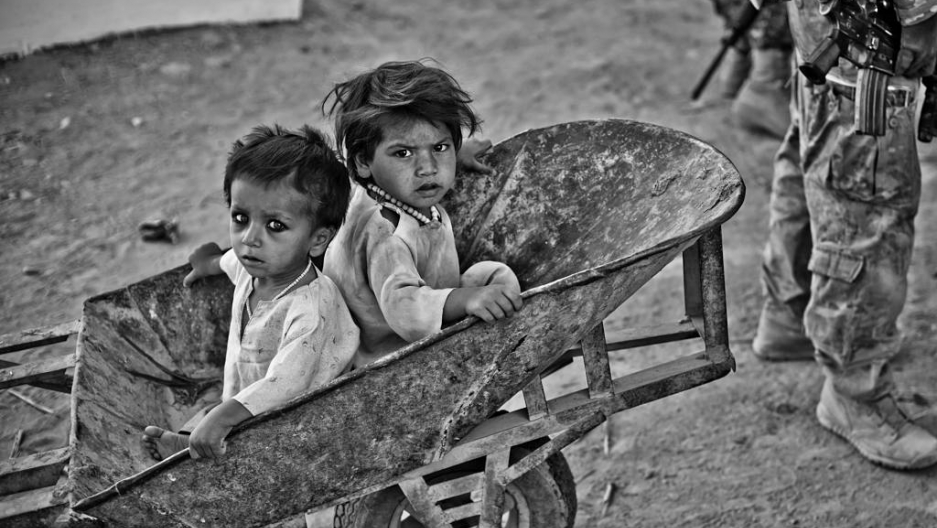 HOWZ-E MADAD, Afghanistan — In a small corner of southern Afghanistan lie two small districts that couldn't be more different. Maiwand is a bastion of relative calm, while its neighbor, Zhari, is too intractably violent for U.S. troops to even begin a counterinsurgency campaign.

So what's the difference between them?

For one, the terrain.

Warrens of muddy ditches and dark orchards, which begin close to the highway, make it easy for Taliban fighters in Zhari to move weapons undetected and launch deadly ambushes from the shadows.

Maiwand, by contrast, is largely flat and spare.

Although Maiwand and Zhari are both primarily populated by Pashtun farmers who grow a mixture of opium poppies, cannabis and grapes, the differences in terrain — among other things — has led them down very different paths over the last decade of war.

Maiwand: The battleground of old

Heading west from the capital, Kandahar's only paved road eventually leaves the verdant Arghandab River area and tracks into open desert. Before long, bustling bazaar stalls begin to crowd the road and a great fortress looms behind them.

This is a British fort from the 1870s and a remnant of their disastrous battle in Maiwand. In the shadow of its huge earthworks is the comparatively tiny Combat Outpost Hutal, where U.S. troops now focus their energy on development and governance projects, rather than military operations and security.

Attached to Hutal is the Maiwand District Center, where Governor Obaidullah Buwari works.

(GlobalPost in Kabul: Why is Pakistan bombing Afghanistan?)

Residents seek services from his office, rather than from the neighboring Americans. Buwari is no miracle worker and often fails to deliver on his promises, but the fact that residents recognize him as a legitimate authority is a big step toward a functioning local government, one of the key goals of the counterinsurgency strategy, according to Davis.

Buwari says he has nothing but contempt for Afghanistan's national government, which he accuses of withholding vital funds for Maiwand. The governor appears to have a good working relationship with U.S. forces and Afghan police, but the Afghan army is another story. After Afghan soldiers accidentally launched a rocket-propelled grenade into Hutal's bazaar, causing a riot, Buwari kicked the national forces out of town and into the countryside.

Afghan police checkpoints dot the highway in Maiwand, and police officers have recently made some spectacular arrests of weapons traffickers. The day after one of the checkpoint commanders, Haji Daywoo, was assassinated near his post, the police stopped a Toyota Corolla on a hunch. The car was headed for Zhari packed with land mines, homemade explosives and detonation cord.

Buwari publicly praised Daywoo's bravery and sacrifice, but privately said what everyone suspected: Daywoo was involved in some untoward dealings and was assassinated when they went badly. He was killed while traveling to a meeting without an armed escort, an extremely unusual action for a prominent security figure in Kandahar.

Despite the corruption and murderous intrigue that pervades the lives of many Afghan officials, senior military leaders in the area say that Buwari is as good a governor as anyone can expect.

"Buwari is corrupt, but at a reasonable level for a politician in Afghanistan," said Col. Daniel Kinsey, Buwari's American advisor and mentor. "He's not one of the bad guys."

Zhari: The battleground of today

Just 10 miles down the highway, in Zhari, the scene begins to deteriorate dramatically.

In Sangsar, not far from Taliban leader Mullah Omar's former residence, most of an infantry company lives within a ring of earthen barricades. The guard towers are attacked regularly, though usually without effect. Outside the compound, the Taliban hide land mines and homemade bombs wherever they think soldiers will walk.

The mines in Zhari are notorious for amputating legs and generate far more dread among troops than even the wildest of firefights. Soldiers here describe gun battles as contests of skill, while avoiding mines is largely a game of chance.

But they continue to fight, they say, because it's their job and they relish the challenge.

Because of the desperate security situation, there is no governmental outreach into Zhari's villages. American and Afghan soldiers hold frequent meetings with village elders to try to assess their needs and gather information on the Taliban. But the civilians caught in the middle of the fighting must sit on the fence for survival — telling the coalition they are pro-coalition and telling the Taliban they are pro-Taliban.

During a meeting at Combat Outpost Sangsar, some of the local village leaders used extremely colorful language to describe what they would like to do about the young Pakistani fighters using their farms to launch attacks on Americans. However, even if what they told the soldiers is true, the farmers are simply outgunned.

After the spring poppy harvest, many farmers leave the area to escape the violence that grips the district throughout the summer. This leaves few local residents for the soldiers to ply with counterinsurgency techniques. The major construction project in the area is building a huge blast wall that will protect the convoys that resupply troops in Zhari and funnel enemy fighters through military checkpoints.

"War amongst the people is complicated. We have a situation where the enemy brings their own wounded to us for treatment — what does that say about how stupid this war is?" said Lt. Col. Kenneth Mintz, commander of 1st Battalion, 32nd Infantry, which is based near the ancient bazaar of Howz-e Madad.

"It's all a game until someone gets hurt."