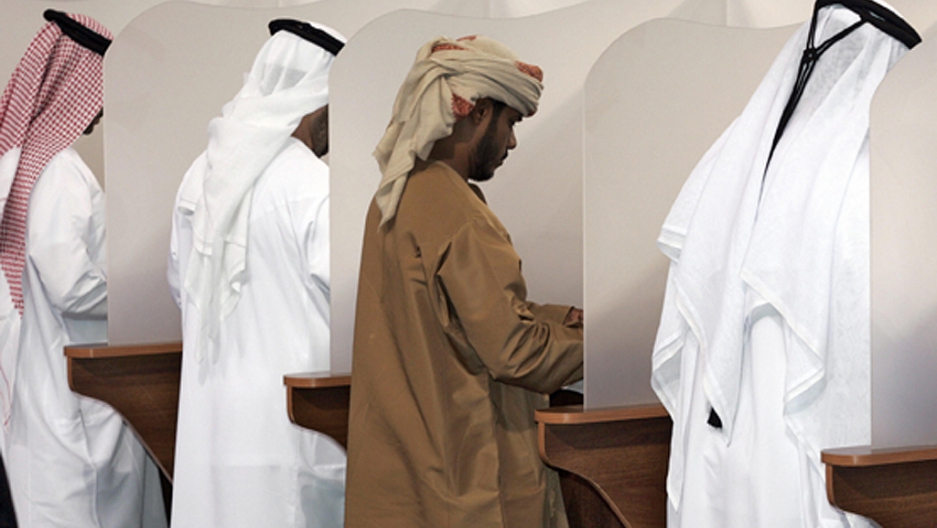 Emirati voters fill their ballots at a polling station in Abu Dhabi before voting in the country's first elections, on December 16, 2006. The United Arab Emirates began its first elections with a limited number of voters choosing half the members of an advisory council, a small step in a tightly controlled reform process.
Credit: KARIM SAHIB
Share

The United Arab Emirates increased the number of citizens eligible to vote in the country's legislative elections, CNN reported on Monday, as protests calling for greater political reform continue sweeping across much of the Arab world.

More than 129,000 voters can now cast ballots in the UAE's upcoming election for the country's legislative advisory body - the Federal National Council.

In the 2006 election for the FNC, around 6,500 members of an electoral college were eligible to vote.

Voters in the Gulf sheikhdom will elect a new FNC on September 24.

Emiratis reacted to the surprise government announcement with excitement, the Dubai-based Gulf News reported.  The expected increase in eligibility for the September election was previously thought to number only 80,000 voters.

One local university professor even told the Gulf News that all Emiratis are now dreaming to make the UAE "the best democracy on earth".

"The national elections with a large pool of citizens will contribute to the building of a successful parliamentary experiment, paving the way to free, direct elections and enhancing the democratic experience in the country," Ahmad Bin Shabib Al Daheri, former first deputy speaker of the FNC, told Gulf News.

The new franchise in the UAE, however, is far from universal.

With a population of an estimated 1 million Emirati citizens, the expanded pool of voters contains only about 12 percent of the country, reported Reuters.

And the country is far from immune to protests, experts told Reuters.  Even though the mostly wealthy UAE sits on massive deposits of oil reserves, some analysts worry that local unrest could flare in the poorer northern emirates.

Despite being one of the world's largest exporters of natural gas, the UAE recently became a net importer of gasoline.

Shortages and supply problems have been frequent in the past few months, according to the New York Times.