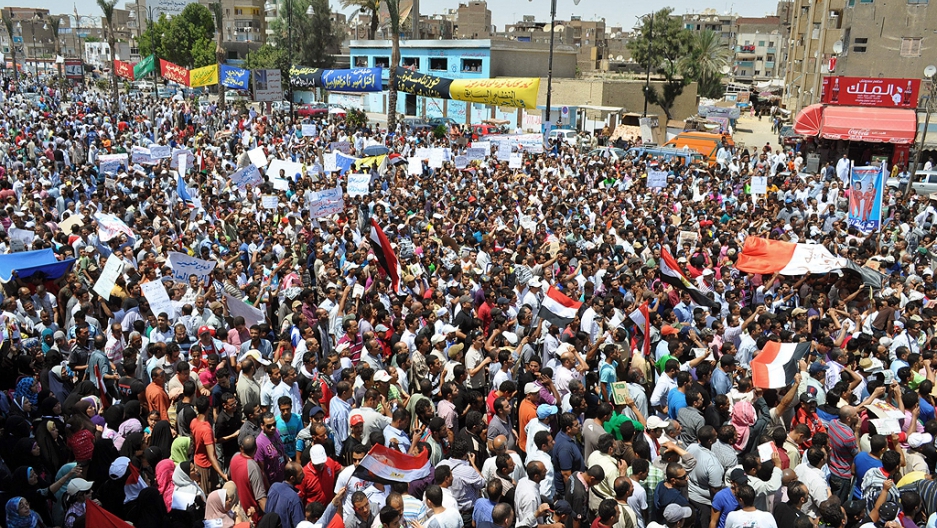 Thousands of Egyptian demonstrators rally in the canal city of Suez on July 8, 2011, as tens of thousands of Egyptians took to the streets across Egypt on Friday to defend the uprising that toppled president Hosni Mubarak, directing their anger at the new military rulers over the slow pace of reform.
Credit: -
Share

Workers' strikes and continued sit-ins by Egyptian protesters threatened to grind life in the Arab world's most populous nation to a complete halt this weekend, as activists stepped up their demands for the government to enact swifter political reform.

Thousands of demonstrators remained in the streets near Tahrir Square on Monday, three days after one of the largest political rallies in Egypt since the ouster of former president Hosni Mubarak on February 11.

Protesters camping out in Cairo's major traffic artery blocked access on Sunday - the first day of the workweek in Egypt - to a government building on the southern side of the square.

Government bureaucrats and citizens seeking services at Cairo's iconic Mugamma building were denied access to the building by Egyptian demonstrators.

“Farce, farce, farce, the gang is still ruling,” chanted protesters outside Egypt's Mugamma building in Tahrir, according to a report by Al-Ahram, in a reference to the widely-held belief by revolutionaries that little has changed politically since Mubarak's resignation.

Similar demonstrations in the coastal city of Alexandria brought parts of Egypt's second-largest coastal city to a standstill on Sunday as well.

Earlier this month, a disgruntled worker reportedly shut down the main electric line powering half of the port city which lies at the southern entrance to the Suez Canal.

"We did not cut the cables, although we could have," Emad El Sadeq, a technician at the Suez Canal Shipyards, told McClatchy in this report. "We had to give them a taste of what we can do."

Protesters in Suez, standing in solidarity with port workers but already incensed over a judicial verdict freeing several policemen accused of killing protesters during the recent uprising, blocked access to a key highway near the canal on Sunday.

"Many of the workers in these companies have organized strikes and sit-ins in the past few months, demanding fair wages," Mohamed Mahmoud, a member of the Suez Youth block, told Al-Ahram. "Now is a perfect chance for them all to join forces and call for social justice in addition to swift trial of corruption. It makes sense that they sympathize with our sit-in," says Mahmoud.

Egypt's military - which has been leading the transitional government since Mubarak's departure - forcefully dispersed the protest long the Suez highway, according to reports.

The army reportedly arrested several people on the highway, leading to even more anger on the streets of Suez.

But neither military's crackdown nor the scorching summer heat seemed to dampen the resolve of activists.

"The [ruling military council] must remember that Suez residents have a history of resistance during the war with Israel…and that the martyrs' blood is sacred," Suez Revolution Coalition member Ahmed Abdel-Gawad told Daily News Egypt, referring to the hundreds of Egyptians killed during the January uprising.

“Beware of the rage of the Suez,” he said.

Meanwhile, several concessions offered by Egypt's prime minister, Essam Sharaf, in a televised speech on Saturday were apparently not enough for protesters in Tahrir.

Pro-reformers have called for another "million-person" rally to be held in Cairo's city center on Tuesday.