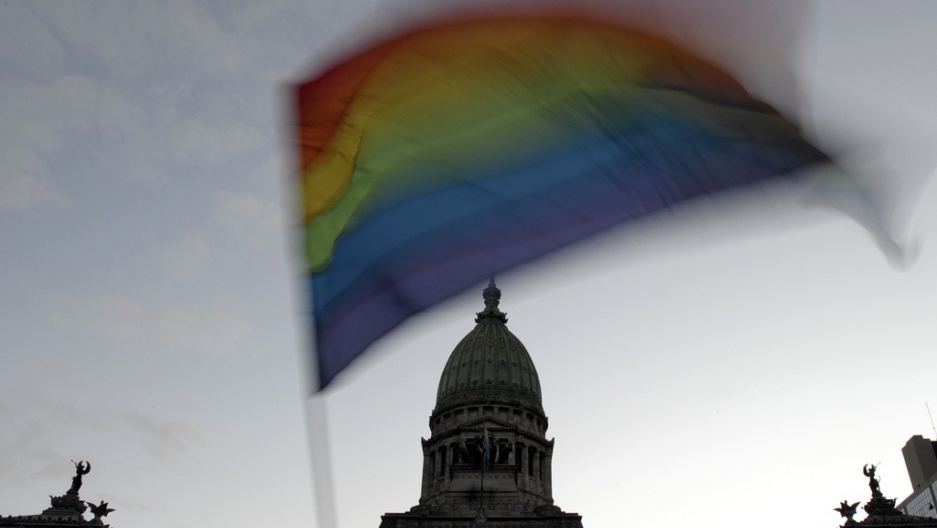 A gay pride flag is waved in front of the Congress building in Buenos Aires, on July 14, 2010.
Credit: Juan Mabromata
Share

Rio de Janeiro is trying to lure tourists with pictures of muscular men.

But the brochure, with the slogan "live the Rio sensation," isn't aimed at women.

It's for gay men.

And it's part of an effort by Rio to position itself as the global capital of gay tourism.

Brazil is the largest nation to recognize same-sex civil unions and this week marks Rio's inaugural diversity week. It follows months of gay-friendly initiatives, including vocational training for transvestites, anti-bullying projects aimed at gay and lesbian students and legislation outlawing discrimination in nightclubs.

The country is hoping that its openness will also prove a moneymaker, drawing gay men — and their money — from around the world. Last year 25 percent of Rio's tourists, or about 880,000 people, were gay, reports the Guardian.

But Rio isn't the first Latin American city to try to lay claim to the gay tourist market.

After Argentina legalized same-sex marriages, Mexico City offered a free honeymoon to the first couple of wed under the new law.

Last year, the city opened an office that caters to gay tourists with the goal of turning Mexico City into the No. 1 gay-friendly destination in Latin America, reported CNN.

And Buenos Aires isn't about to give up its reputation as a gay mecca. Last year Argentina became the first Latin American country to legalize gay marriage.

Gay tourism makes up about 20 percent of overall tourism to the country, according to the tourism ministry.

"Whichever angle you look at — be it travel, be it where you stay, be it dancing tango — there's everything for gays now," said Welsh tourist Kalervo Barker. "We we gays tourists feel really comfortable here."