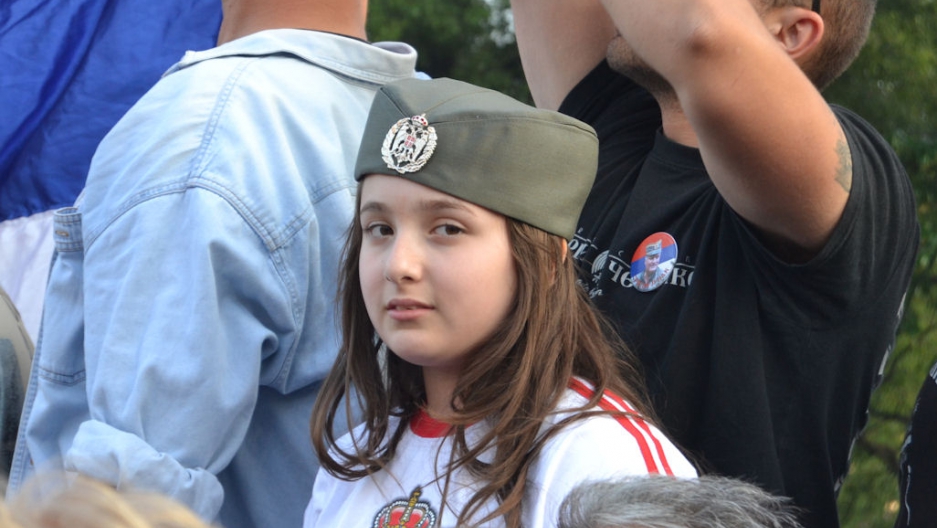 A young girl attends a nationalist rally on May 29, 2011 in Belgrade, Serbia.
Credit: Sasa Milosevic
Share

BELGRADE, Serbia ― Young men holding stones and spreading the stink of cheap liquor periodically take over the streets of this capital city. During recent protests, they broke shop windows, burned cars and overturned flower pots, all in the name of defending the patriotic interest of Serbia.

Serbia’s capital has been ransacked twice in the last eight months, in October by opponents of the gay pride parade and at the end of May after Ratko Mladic’s arrest. In response, the Serbian Constitutional Court recently banned "Nacionalni Stroj," a neo-Nazi organization that promotes the concept of race purity and hatred of non-Serbs.

Twelve years after NATO bombs rained down on Belgrade, many Serbians wish to leave nationalist tensions behind and turn Westward, with the hope of joining the European Union. Young nationalists, however, have taken up the cause. According to psychologists, social workers and political analysts, they are victims of manipulation and exploitation from powerful nationalists who work behind the scenes.

The most influential nationalist parties and groups recruit their supporters among the poor, badly educated and unemployed who are younger than 25. They include frustrated teens from working class families, young refugees from other parts of the former Yugoslavia and frenetic supporters of local and national football teams.

Mirko Jovanovic, 23, a participant in a recent protest against a NATO conference being held in Belgrade, said his anger stems from the behavior of Serbian politicians.

“They have forgotten Serbian victims. A year or two ago, they hosted the NATO pilots who bombed Serbia, and now they host the NATO conference, which gathers the biggest killers in the world,” Jovanovic said, sounding like many of the youth who have taken to public squares in 2011 to protest their countries’ leaders. Then his rhetoric took on the tinge of Serbian nationalism. “They even are not afraid of God, and many of them already pay a terrible price, having their own sick children or they personally suffer from incurable disease. Some of them are even gays. And we know it is one of the most devastating diseases. God has punished them because they betrayed their own people, the heavenly people."

The young nationalists display their fervor by supporting indicted war criminals, such as Mladic. They stand behind stalls plastered with posters of men indicted by the International Criminal Tribunal for the Former Yugoslavia in The Hague, and shout their names at anti-Hague and anti-European protests rallies. Young Serbian women wear T-shirts illustrated with war criminals’ faces, while holding the flag of their political party or right-wing organization. While women usually do not participate in riots, they collect information about security forces to warn their male counterparts.

But the leader of one ultra-nationalist group, Mladen Obradovic of Obraz, says Serbian nationalists have an undeserved reputation.

"All those riots you saw after the gay parade and the protest rally in support of Ratko Mladic are the actions of the government and its provocateurs,” he said. Now 30, Obradovic said he became a nationalist at 19. He stresses that Serbs did not commit organized war crimes during the Balkan wars, calling the final count of 8,000 Srebrenica victims Western "propaganda lies."

“Only 2,500 bodies have been found. Among these bodies there are no women, no children,” Obradovic insisted. “There were killed only men of military age. These are the Muslim soldiers who died during the fighting. Only a small number of them have been blindfolded with tied hands that indicate that they were military prisoners."

One former ultra-national, who asked to remain anonymous for fear of retaliation by his former comrades, said their ideology often strays from nationalism to Nazism. His group’s leaders, he said, distributed Nazi literature.

"As an unhappy, furious and angry teen ... I read Hitler's ‘Mein Kampf,’ thinking that Serbia should follow such a ‘perfect system.’ I believed that Serbs should follow the German ideology, and it spawned the hatred in me toward Slovaks, Czechs and other Slavic people,” he said. “I participated in an organized fight with Israeli basketball fans in Belgrade and I personally demolished a fast-food shop owned by Jews.”

The former ultra-nationalist said that when he became older he learned about “the dark side of Hitler's personality” and rethought his beliefs. But young people continue to join the ultra-nationalists, he said, to defy the establishment.

"They have seen for years that Serbs accused of war crimes are arrested and extradited to the Hague,” he explained. “But what's happening with notorious Bosnian war criminals such as Naser Oric who participated in killing of hundreds of Serbian civilians? They have been symbolically sentenced. It is a trigger for young and angry Serbs to be in solidarity with Serbs accused of war crimes. "

One reason such attitudes continue is that Serbia has not used schools to counter the ultra-nationalist message, said Simon Simonovic, an activist with the Serbian NGO "Europe has no alternative." “Kids grow up in that same education system as generations growing up 90s,” he said.

Schools are not the only venue in which the government seems powerless against nationalist messages. For example, it has been unsuccessful in clamping down on graffiti artists who celebrate war criminals and other law breakers.

The young graffiti artists often work under cover of darkness. To be arrested, they must be caught in the act. Those who would report them fear retaliation. So buildings in Belgrade and other cities boast art celebrating Mladic, Radovan Karadzic, Goran Hadzic and others ― such as Uros Misic, accused of attempting to kill a policeman at a football match, and Miladin Kovacevic, a Serbian basketball player studying in the United States who beat his American fellow student Bryan Steinhauer into a coma. In that case, the Serbian government helped Kovacevic flee the country and refused to return him to U.S. custody. Young Serbs have leapt to Kovacevic’s defense with a Facebook group "Do not extradite Miladin Kovacevic" promoting a different version of the incident than that prevailing in U.S. media.

While the young Serbian recruits often pay a price for their political activities, ending up in prison, hospital or the grave, their political bosses find ways to avoid legal responsibility. Some of the most radical Serbian nationalists have also changed their tune, becoming advocates of joining the European Union.

Some ex-members of the Serbian Radical Party, for example, have established a European-oriented Serbian Progressive Party that supports the arrest and extradition of war criminals. On Twitter they explained their change of heart, saying they have the right to make mistakes and correct them. But in the political race to Brussels they have left behind an army of young people poisoned by religious, racial and national hatred.