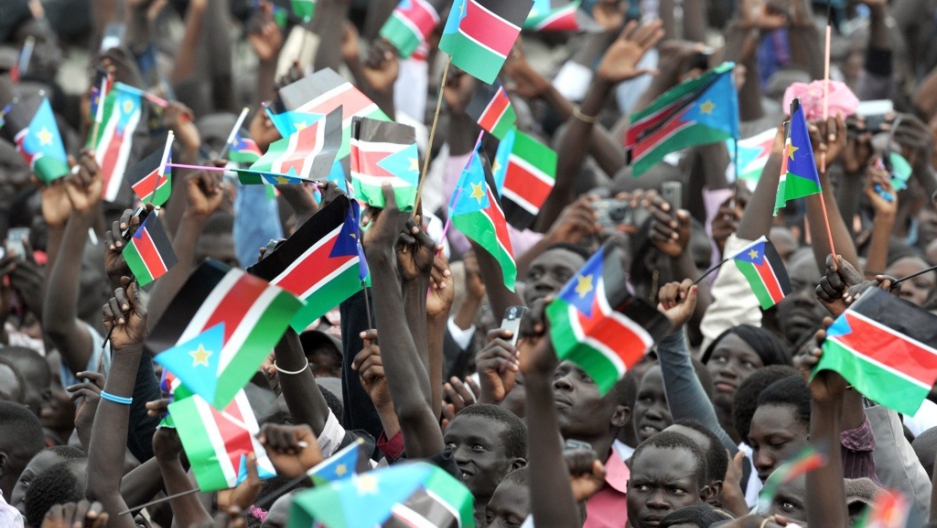 South Sudanese wave the flag of their new country in the capital Juba on July 9, 2011 to celebate the nation's independence from Sudan. South Sudan separated from Sudan to become the world's newest nation.
Credit: Roberto Schmidt
Share

JUBA, South Sudan — As the flag of South Sudan was raised for the first time tens of thousands of overjoyed people filled Freedom Square, a patch of rough ground next to the mausoleum of John Garang, the father of the country's long-awaited freedom.

The sun beat relentlessly but did not dampen the joy and emotion of the crowd who sang the new national anthem with gusto, tears in the eyes of some. With independence a reality at last people offered up prayers, hugged and danced.

The world’s newest country — the 193rd in the world and 54th in Africa — is perhaps also its least developed largely as a result of half a century of war when the South fought for its independence. Even having attained independence, South Sudan still faces huge challenges and continuing insecurity, but Saturday in the new capital Juba was a day of celebration.

The two leaders, formerly bitter enemies, stood side by side on the podium, Kiir in his trademark black Stetson cowboy hat. The hat symbolized the differences between the two leaders — Kiir, Christian and Western-looking, fought for years for South Sudan's independence while Bashir, Muslim and Arab, battled to prevent the formation of the country. Bashir is wanted for genocide and war crimes in Darfur, the western part of Sudan.

Before the crowd of thousands Kiir signed the Republic of South Sudan's constitution and then held the red leather-bound book aloft from the podium overlooking the crowd. Nearby was the shiny statue of Garang, Kiir’s mentor, friend and comrade who died just months after the signing of the peace deal in 2005 that ended decades of North-South civil war.

“We have waited 50 years for this day … It is a dream that has come true,” said Kiir to cheers from the audience.

His speech was not triumphalist, instead he acknowledged his government’s failings and its challenges. Kiir called corruption a “cancer” in his government and deplored the “self-inflicted” nature of some of the South’s sufferings through repeated bouts of violent infighting both during the civil war and since, often organized along tribal lines.

“You are South Sudanese first,” he said, taking a leaf out from the book of Paul Kagame, Rwanda's president who has sought to bring the country's ethnic groups together as a united nationality.

Kiir also repeated an offer of amnesty to the various rebel generals who are currently fighting the government and army in oil-rich states in the border areas close to northern Sudan.

Kiir implicitly criticized Bashir, who sat behind him during the speech. Bashir's northern army seized the disputed Abyei border area in May and recently began bombing the Nuba people of South Kordofan. Bashir is also widely expected to crush dissent in the state of Blue Nile.

Yet with the northern president sitting behind him Kiir said: “To the people of Abyei, Darfur, Blue Nile, South Kordofan: We have not forgotten you. When you cry, we cry. When you bleed we also bleed. I pledge to you today that we will find a just peace for all.”

“Independence is not a gift you were given but a prize you have won,” said Susan Rice, United States ambassador the United Nations. She promised the U.S. would be a “true and lasting friend and partner” to South Sudan.

U.N. Secretary-General Ban Ki-moon described independence as “the culmination of a long struggle … that destroyed so many lives for so many years.” He acknowledged that problems remained and there were new struggles ahead.

“The will of the people of the South has to be respected,” he said after congratulating southerners on their independence. The previous evening Khartoum announced that it recognized the new nation.

There was no jeering, no booing of the man who for years led the war against independence for South and even now is blamed for ordering violence in the contested border area. The crowd waited silently through Bashir's lengthy speech in Arabic and when he stepped back from the podium, thousands of people waved their hands, their flags at their sides, in a goodbye gesture.

And with that came the deafening 21-gun salute after which the heads of state and dignitaries piled into an assortment of 4WD vehicles, the army which had earlier performed a military parade before wilting in the sun for hours, marched off down the road, and the party started.