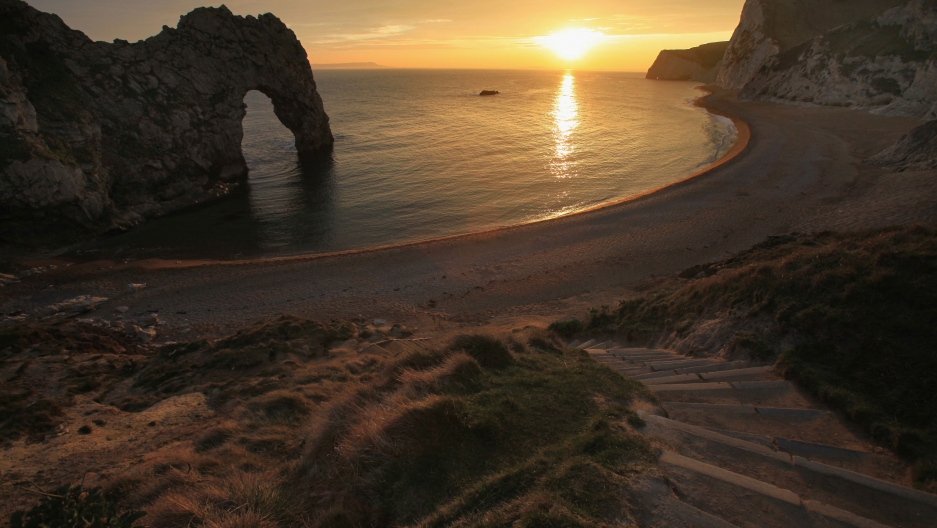 The sun sets over the sea near Durdle Door on March 15, 2011 in Dorset, England. The natural limestone arch near Lulworth in Dorset, is one of the highlights of the Jurassic Coast, a World Heritage Site.
Credit: Matt Cardy
Share

Forget Jaws. The waters off England’s Jurassic Coast were arguably never safe when this prehistoric predator, said to devour anything and everything in its path, cruised the ocean depths.

More than 150 million years on, pliosaur is making a comeback – or at least its skull is, complete with massive jaws measuring 8 feet in length – to be unveiled Saturday at Dorset County Museum in the presence of respected natural history film-maker Sir David Attenborough.

As the Dorset Echo reports, the fearsome fossil was discovered by amateur collector Kevan Sheehan between 2003 and 2008 after a landslide dislodged its bones from an eroding cliff.

According to the BBC, extraction of the skull, has taken 18 months.

Richard Edmonds, Dorset County Council's earth science manager for the Jurassic Coast, said in a statement on the museum’s website: "It is an amazing achievement to have recovered this fossil from an eroding cliff over such a long period of time and without losing any important pieces."

He added that the awesome creature was believed to have possessed "the biggest bite of all time – powerful enough to break a small car in half".

"This is an iconic specimen – one of the most exciting we have seen in years. It was probably the most fearsome predator that ever lived.

"Standing in front of the skull you can imagine this enormous beast staring straight back at you, fixing you with its binocular vision, and attacking. Just thinking about it raises the hairs on the back of your neck."