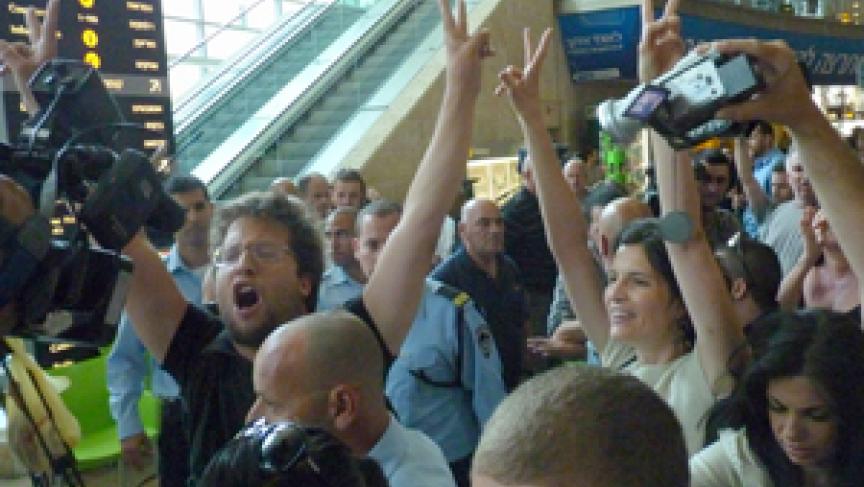 Pro-Palestinian activists being detained in Ben Gurion airport. They tried to unfurl a Palestinian flag and held up signs welcoming activists from Europe to Israel. (photo: Fouad Abu Ghosh)

Share
Israeli authorities detained dozens of pro-Palestinian activists on Friday arriving at Ben Gurion International Airport outside Tel Aviv. The activists were part of a coordinated effort involving hundreds of people, mostly from Europe. They had planned to fly into Israel to show solidarity with Palestinians, but most of the activists never made it. Israeli authorities sent a list of nearly 350 names to airlines, saying the individuals on it would not be allowed to enter Israel for security reasons. They would be sent back, Israel said, and the airlines would have to pay for it. By lunchtime on Friday, the tactic seemed to have worked. Some 200 activists had been denied permission to board flights to Tel Aviv. Still, the Israelis weren't taking any chances. Hundreds of additional security forces were deployed to Israel's main airport. Police spokesman Micky Rosenfeld said authorities had the situation under control, but the event was also unprecedented. "This is the first time that we're dealing with a large number of activists intending to disrupt travel in Ben Gurion airport," Rosenfeld said. "It's important for us to make sure that there are no incidents inside the terminal." Several minutes later, there was just such a small disturbance, in the main arrivals terminal. A half-dozen Israeli leftwing activists held up signs in Arabic and English that said "Welcome to Palestine." They tried to unfurl a large Palestinian flag, but they were quickly hauled away by plainclothes officers. Several Israelis nearby shouted at the protesters, "shame on you, you should go to prison." One bystander, shaking his head in disgust, told me he was a Jewish immigrant to Israel from Syria. "I don't really know what this protest is, but I'm against it," he said. Then his friend chimed in, saying no one would be allowed to raise an Israeli flag in Syria, and that people should respect the laws here. Police said they detained six Israeli demonstrators at the airport Friday. Thursday night, they deported two Americans said to be part of the fly-in protest. French activist Olivia Zemor had planned to fly in, but was refused permission to board a flight. She said there were no plans to create any provocation at the Israeli airport, or hold demonstrations inside Israel; the plan was to just to visit Palestinian areas in the West Bank. One Israeli official told me that the government has no objections to visitors coming to Israel or to Palestinian areas that are popular with tourists, like Bethlehem or Jericho. But foreigners traveling to the Palestinian territories to take part in anti-Israel demonstrations? That is something different, he said.