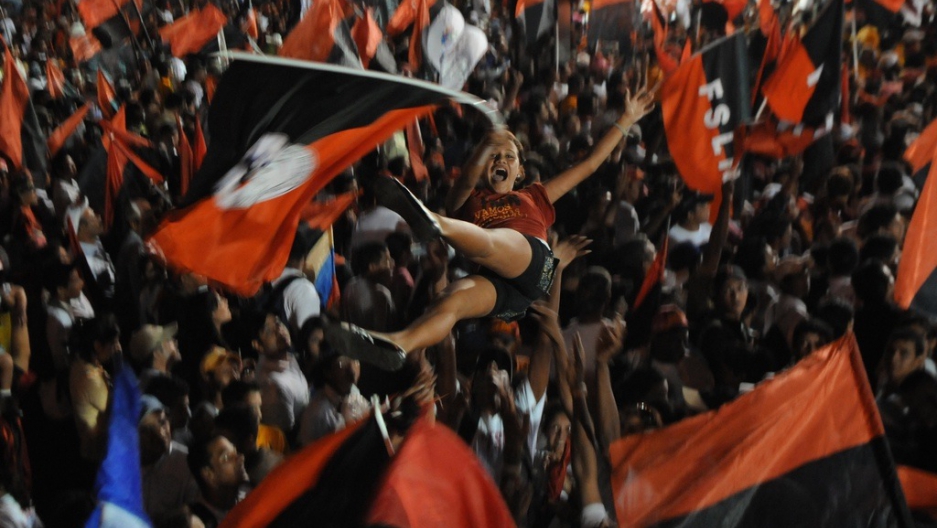 MANAGUA, Nicaragua — The sudden illness of Hugo Chavez doesn’t signal disaster for at least ones of Venezuela's socialist allies.

Nicaragua has wisely invested millions of dollars in aid from Venezuela in key industries that will continue to churn profits after Chavez has gone.

While other countries in the region are sweating the possible loss of oil subsidies should Chavez not recover, Nicaragua — led by aging revolutionary Daniel Ortega — has avoided the Soviet-style trap of creating total dependency on a foreign benefactor.

Ortega is now arguably the strongest leader in the socialist ALBA alliance, which was created by Chavez and Cuban leader Fidel Castro and is bankrolled by Venezuela’s lucrative oil exports.

“In contrast to the governments of Bolivia, Venezuela and Ecuador, which have been losing strength over time, Ortega has been gaining,” said former Salvadoran guerrilla leader Joaquin Villalobos.

Villalobos said Ortega is more politically savvy than Chavez and other leftist leaders. And the Nicaraguan model — a steadily growing market economy that has attained macroeconomic stability and a solid working relationship with the International Monetary Fund (IMF) — is much different from that of any other ALBA nation.

“This is responsible populism — Ortega is having it both ways,” said Arturo Cruz Jr., Ortega’s former ambassador to Washington and a professor of political science at Managua’s INCAE business school.

Cruz insists that Ortega’s project is “not ALBA.” Yet at the same time, Cruz argues, Ortega has tapped ALBA to save Nicaragua from “going to the dogs.” And though that relationship has been a bit heavy on the divisive rhetoric, and even forced Ortega to follow Chavez into some unwise foreign policy moves — such as courting Iran — “that’s the price Nicaraguan society has to pay to have a viable country,” Cruz said.

Even economists who once questioned Ortega are starting to come around. Francisco Mayorga, Nicaragua’s former Central Bank president who authored the monetary reforms of the early 1990s that brought an end to the hyperinflation from the first Sandinista government, has since become a fan of — and economic adviser to — the second coming of Ortega. He credits Venezuelan aid for Nicaragua’s recent leg-up.

“Venezuelan cooperation has been very important for the Nicaraguan economy because it has been the impulse for a process of social and economic transformation. Economically, Nicaragua’s exports have jumped from $1.04 billion in 2006 to $2.4 billion in 2011. And socially, extreme poverty has dropped from 17 percent to 10 percent,” Mayorga said.

He explains that the previous administration of President Enrique Bolaños (2001-2006) “depended almost totally on foreign aid,” receiving amounts that nearly equaled the country’s annual export totals. But under Ortega, he said, “the dependency on foreign aid has diminished quickly” as production and exports set new records and eclipse foreign aid totals.

Some of that, however, is addition by subtraction. Many traditional donors have curbed or cut aid to Ortega’s government amid concerns for democracy. Chavez has more than made up the difference and invested the money in a series of “ALBA businesses.” The businesses, which were privatized under Ortega, now have virtual control over key economic sectors such as energy, oil, timber and cattle, as well as growing influence in industries such as tourism. Other ALBA funding is used for social assistance for the poor, microcredit loans and other programs that mostly benefit Ortega’s party loyalists.

With the economy predicted to grow another 4 percent this year, Ortega — enjoying his highest approval rating in 30-plus years — is considered the easy favorite in the 2011 presidential elections. That forecast comes despite serious concerns about Nicaragua’s electoral transparency and wilting rule of law, as Ortega sidesteps constitutional term limits to run again for the fifth consecutive time.

While the political situation in Nicaragua is perhaps more complex than that of other ALBA nations, it’s a complexity that is working to Ortega’s benefit.

“Populists are not faring too well these days; Venezuela’s Hugo Chavez, Ecuador’s Rafael Correa and Bolivia’s Evo Morales have major political problems. But Ortega is different — he is in good political shape and seems headed for easy reelection,” said Michael Shifter, president of the Inter-American Dialogue in Washington. “Of course, Ortega is not a populist like are the others. He has not defied Nicaragua’s establishment. Rather, he has skillfully co-opted the establishment. In fact, he has become the establishment.”

Shifter said Ortega’s political wiliness and economic prudence is a product of three decades of practice. It also comes from having to lead a country without (so far) oil or natural gas. Having those resources has been “both a blessing and a curse” for the other ALBA allies, Shifter said.

“In those cases it has led to a sense of complacency,” Shifter said. “But Ortega doesn’t have that luxury, which has forced him to cobble together resources to sustain the economy.”

Ortega has made deals and forged economic and political alliances to stay in power. And it’s those more pragmatic relationships that will help Ortega survive any violent shakeups, in the event Chavez doesn’t recover to full form.