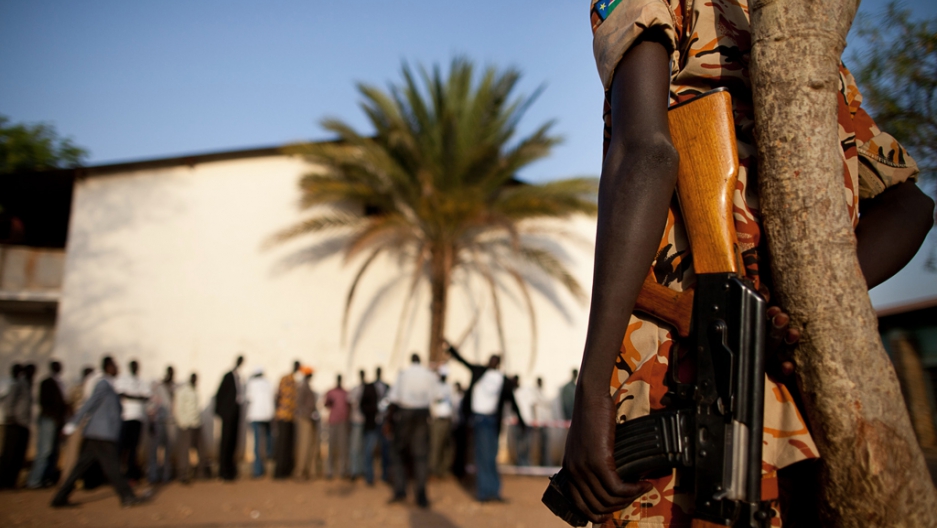 WAU, Sudan — As Amger Ngor fled the fighting in Abyei six weeks ago she left everything: her little shop with its generator, her television, fridge, furniture, clothes, a child’s bike. It was just like three years earlier, she said, but worse.

“Then they did not use Antonovs or fighter planes,” she said.

An aid worker who drove up the rutted road toward Abyei immediately after the attack described a “Biblical scene” of thousands of fearful people streaming out of town.

Opinion: The Khartoum regime must not be allowed to get away with the seizure of Abyei

As South Sudan prepares for its independence on Saturday, the displaced people of the Abyei have little to celebrate because of the violent seizure of the border region by the army of the North.

They are sheltering from the rains beneath trees and tarpaulins, unable and unwilling to go home until a promised battalion of 4,200 Ethiopian peacekeepers is deployed, a move agreed to by the governments of Sudan and South Sudan and sanctioned by the U.N. Security Council.

Sebit Khamis, 24, walked for six days from Abyei through the bush and then along dirt roads until he felt safe. He had been a policeman but saw no point in trying to take on the north’s superior firepower when they invaded.

“There was shelling, they had tanks, Antonovs, what could I do? I knew they would kill me,” he said.

His home now is with more than 1,000 others on a patch of cleared land outside the town of Wau where they rely on handouts from the World Food Program and assistance from aid agencies like Save the Children, which is working to reunite scattered families.

South Sudan's capital, Juba, is being spruced up with fresh paint, swept roads and new street-lights. Speeches, dances and sports matches are being prepared but the displaced of Abyei feel left out of the incipient nation’s coming party. “How can I celebrate when my place is burning?” asked Khamis.

Abyei was a place of straw-roofed mud-walled huts called tukuls, with a crumbling police station, colonial-era administrative buildings, a whitewashed mosque and a canary yellow church.

The town’s dominant feature was a United Nations compound made up of white air-conditioned containers ringed with concertina wire. It was behind these fortifications that U.N. peacekeepers cowered when the army of the North attacked.

Before the occupation, Abyei’s main market was a bustling place. A parade of little restaurants sold rice, pasta and meat stew. Young men took deep pulls on hookahs and the sweet smell of tobacco hung in the air.

Everyone was of the Dinka tribe and adamant they belonged in the south, despite Khartoum’s ownership claims and a 1905 agreement that passed control of Abyei to the North. The Misseriya nomads, on whose behalf Khartoum claims Abyei, were nowhere to be seen.

“We and the South are one body. You cannot cut off your arm,” Adil Deng Ajang, a 32-year-old civil servant, said earlier this year, before the invasion.

On the far side of a warren of mud alleys and wooden stalls, past a fetid green pond, dozens of elderly Dinka men sat beneath the shade of a thatched grass roof.

Some bore the parallel scars that are traditionally carved into the foreheads of Dinka adolescents. Some wore tatty Western suits, others wore Arab tunics and taqiyahs. Many had walking sticks and thick-framed sunglasses to protect against the constant glare that lends Abyei a sun-blasted monochrome palette during the dry season.

Two large metal platters piled with food lay untouched on the ground until the talking was finished. “The North does not want us, it wants our land,” said Kuol Deng Maluak, a tribal chief on a plastic chair.

Kout Ajak, rested his weary, wiry body on the edge of a metal bedstead, a loose gold watch on his wrist, flip-flops on his feet, scars across his forehead, his white stubble like morning frost. Speaking in the Dinka language he said, “You see me. I look like a southerner with my marks and my voice. How can I go to the North?”

Tribe, land and oil have proven a combustible combination in Sudan, in Abyei and elsewhere.

In South Kordofan, Sudan President Omar al-Bashir faces fresh charges of ethnic cleansing for attacks on the people of the Nuba Mountains — black Africans who fought alongside the South during the 22-year civil war. There are fears that fighting may also erupt in Blue Nile, another border state with similar dynamics.

As South Sudan prepares for its July 9 independence, these ominous rumblings indicate the border areas between Sudan and South Sudan may be troubled by violence for some time to come.