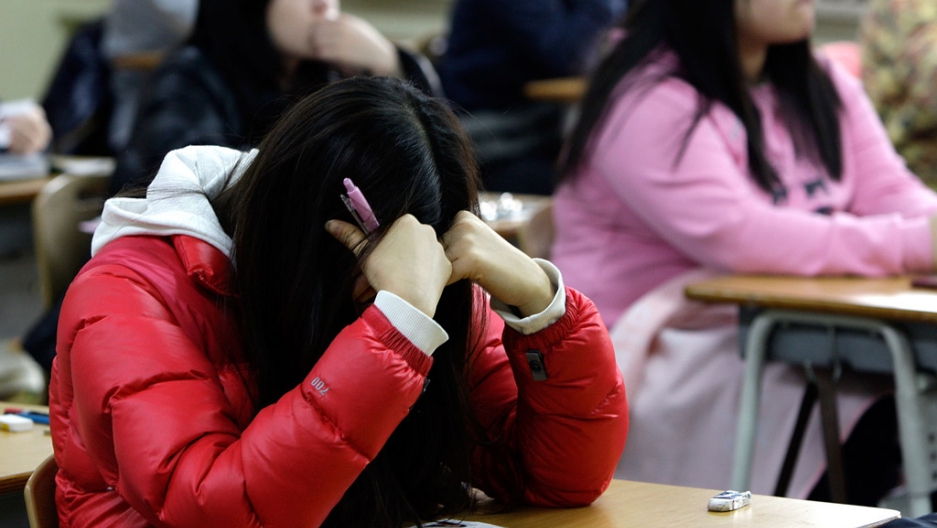 South Korean students take their College Scholastic Ability Test at a school on Nov. 18, 2010 in Seoul. Traditional textbooks may soon be a thing of the past in South Korea. The education ministry has announced that it will invest $2.4 billion toward ensuring that all schools use digital textbooks by 2015.
Credit: Chung Sung-Jun
Share

South Koreans are known for being tech-savvy and into education.

Now they're known for combining the two.

According to a new education ministry announcement, South Korea intends to completely phase out the use of old-fashioned textbooks in schools by 2015.

Instead, all textbooks will be available in digital form, accessible via iPad or smartphone or whichever digital doodad you have on hand.

(Read more: Nicholas Negroponte makes the case in GlobalPost that books are better without pages.)

It's all part if the country's "Smart Education" plan, which will create a cloud network by which students can access their textbooks and store their homework from any online source.

It's a glimpse into the future of schools, for sure. Though, not likely one that will span the globe just yet.

First there's the money issue. The government likes to say that the switch will ultimately save money, and it's true that digital textbooks are cheaper there than in the States, but they still cost money. And, simply put, South Korea's economic reality isn't shared by all.

Second, there's the issues of how widespread the internet is.

South Korea has the highest internet penetration in Asia, at 81 percent, so the condition is met.

Moreover, an Organization for Economic Cooperation and Development report, released on Monday, showed that South Koreans between the ages of 15 and 19 learn the best from computers and the internet when compared to their counterparts in 16 other countries.

So, it may be the future of the global school, but in South Korea it's about to be the here and now.

Elementary schools are scheduled for a full digital adoption by 2014 and middle and high schools will join them by 2015. Teachers will start getting special training in 2012.

(Read more: A look behind the booming business of e-books in Taiwan. It's a page turner.)