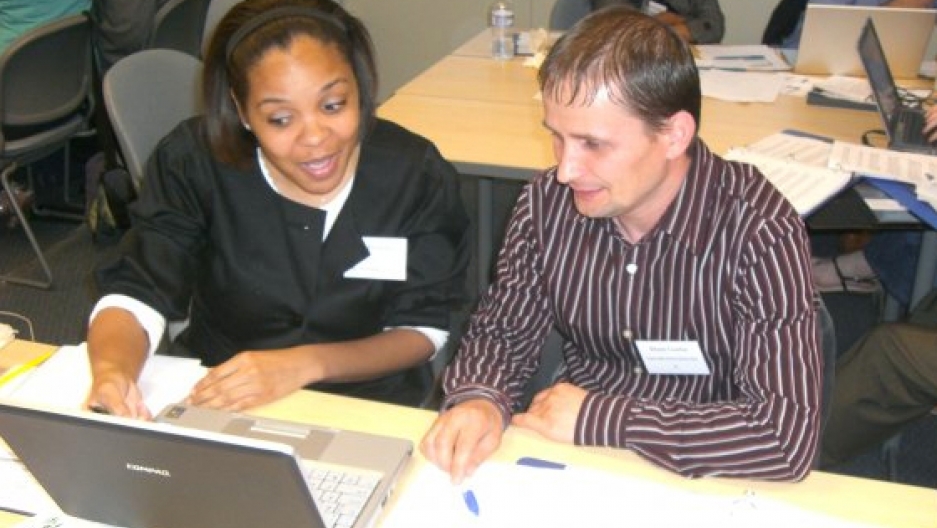 Share
By Monica Campbell A job search can be daunting. But even for highly skilled immigrants and refugees new to the U.S., Iraqi engineers, Ethiopian doctors or Chinese nurses, the job hunt can be especially tough. Often they have never faced things like sit-down interviews or networking schmooze sessions. Failure to master these most American of job hunting skills can force skilled immigrants to leave behind their careers and work as waiters and cab drivers. There is a non-profit that helps to ease the job hunt for immigrants with a crash course in selling themselves American-style. On a recent Saturday morning in downtown Oakland, Qassim Qassim waited to enter a large meeting room. The clean-cut 28-year-old from Iraq was pretty nervous. Finally, after years of work and study in both Iraq and China, and while waiting for his American visa, he was interviewing for his dream job as a marketing executive at Google. "This is a very competitive company," said the interviewer. "We have a lot of qualified candidates. Why should we hire you?" "Um, well," Qassim stammered, "I'm from Iraq and I lived in China and I made it all the way here. My aim and my goal is to make the connection between these three worlds, and I think we get them all together with a person with my qualifications will make Google best or better," he said. Qassim stumbled a bit. But it's okay. The interview wasn't real. It was a dry run, practice for when Qassim gets a crack at a real job at Google. It's all part of a workshop run by the non-profit Upwardly Global. The group helps immigrants land jobs in America similar to those they had back home. "Actually, I'm practicing. I want to see how it will be. It is the first time in my life," Qassim said, "that I'm excited about this." Qassim took the rehearsal seriously. And so did the other 30 or so immigrants present there. The room was filled with doctors and nurses from China and India, engineers from Iran; many in their late 20s and 30s, all with college degrees and ample professional experience back home. And they all know they risk getting stuck in a so-called "survival job": working as parking lot attendants, cashiers or taxi drivers. After his mock interview, Joseph Daluraya, a Wells Fargo employee who volunteered to help mentor Qassim, offered some feedback: "You want to be relaxed, you want to be confident, you don't want to appear too scripted or too robotic or too stiff," Daluraya counseled. "It has to seem natural, because these are common questions: what do you want to do in five years, what are your strengths, what are your weaknesses." After giving the feedback, Daluraya explained why he was there. "My parents are first generation from the Philippines. I'm second generation. I just wanted to take the opportunity to give back to individuals and people in need as well," he said. "A lot of the jobseekers are very interested and eager. They want to get involved and dive-in head first to the job industry." After the interview, Qassim seemed a bit shell-shocked. He'd never been asked about his strengths or leadership skills before—or where he saw himself in five years. "There were some questions that I was not really prepared," Qassim said. The feedback is for me to be prepared. I mean he asked me some questions, and I kind of made up some answers." Next up is an American-style networking session. Time to approach strangers, look people in the eye, deliver that 30-second elevator pitch. It can be nerve-wracking for anyone, and especially so for people whose first language isn't English and who are from countries where you typically get jobs through family connections, not by navigating a room full of strangers. "For a lot of our jobseekers this is the very first time they've been in an American style networking event, where you're allowed to talk to people who you've never met before," said Gretchen Vierstra of Upwardly Global. She helped organize this event. Vierstra quickly noticed that not everyone was mingling and that a number of the immigrants looked daunted. So she offered a few tips. "If it looks like everybody's too busy talking in a group and there's nobody to talk to you, you can always say, 'May I join your conversation?'" she suggested. "Yeah, it's perfectly fine, okay? So disperse!" The group laughed, and eventually the room was noisy as job hunters plunged in. Ying Zhao, a Chinese nurse, was clearly energized. "It's really good practice. At least right now, I can open my mouth to talk, you know," Zhao said. "Before today, I was shy. I was nervous. I don't know what I can talk. I learn a lot today." Now comes the hard part. Keeping confident while contacting employers, hoping to apply what they practiced here in the real world.