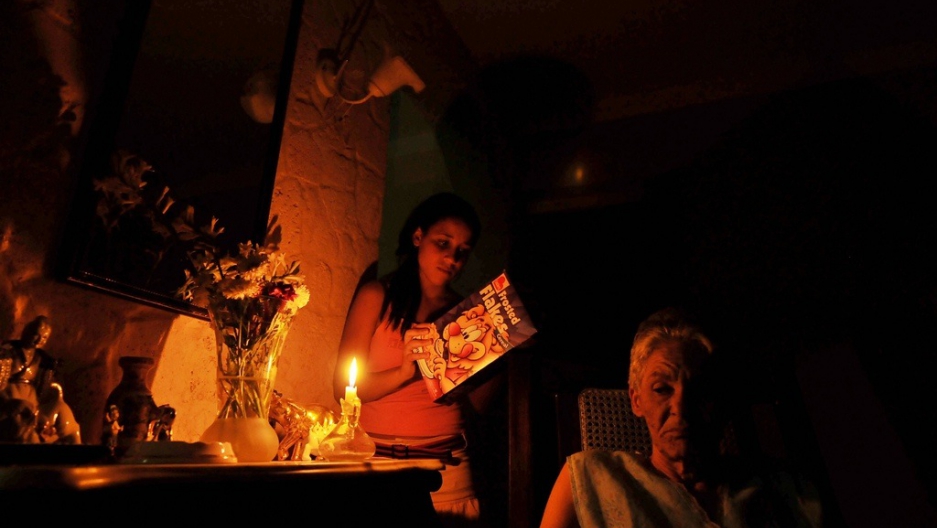 A Cuban girl reads the inscriptions on a food box by candlelight during a power cut on May 31, 2009.
Credit: STR
Share

HAVANA, Cuba—As Hugo Chavez boarded a plane here early Monday for his return to Caracas, he stood on the tarmac with Raul Castro and offered some parting words of reassurance: “Venezuela and Cuba are the same thing, the same country,” he said.

And that, precisely, is what’s at stake for Cuba with Chavez now battling cancer. Billions in Venezuelan subsidies to the island — and other regional left-leaning allies — are riding on his recovery.

Two decades after the Soviet Union’s implosion brought chronic blackouts to Cuba and sent the island’s economy into a ditch, Havana is once again highly dependent on foreign largess to keep the lights on. Chavez provides Cuba with more than two-thirds of its petroleum needs, and the island earned an estimated $3.5 billion in trade last year with Venezuela, its largest source of hard currency.

Chavez, 56, has not disclosed what type of cancer he has, or what the prognosis is, only that he had a growth described as a pelvic abscess removed and that “cancerous cells” were discovered by Cuban surgeons.

When he landed Monday in Venezuela in preparation for his country’s bicentennial celebration, Chavez appeared upbeat and energetic, sending out messages to his 1.7 million Twitter followers and assuring television audiences he was “devouring” his meals.

“Thank you, my God! It is the start of the Return!” he tweeted.

But in Havana, it has been the start of concern. Chavez’s imperiled health brings new attention to the fragility of Cuba’s economy, at a time when 80-year-old Raul Castro is struggling to put the island’s finances in order and proceed with carefully managed, incremental liberalization measures.

Cuba’s communist government is planning to lay off hundreds of thousands of state employees over the coming years and is allowing the expansion of small private businesses and cooperatives. One big reason Havana can afford to conduct the reforms at its own pace is the dependable revenue coming from Caracas.

If Chavez’s rule were to end because of his illness or impact his December 2012 re-election bid, the return of 40,000 Cubans now working in Venezuela — mostly in the health care sector — would create still more financial strain for the Castro government.

Of greater worry is Cuba’s energy supply. Steady oil shipments from Venezuela have largely eliminated the chronic blackouts that plagued Cuba in the early 1990s and led to riots in Havana, as well as the chaotic departure of thousands of rafters for the U.S.

Back then, Fidel Castro was still at the height of his political powers, taking to the airwaves almost daily to pull Cubans through the crisis by the sheer force of his will. Now he’s 85, and far too frail to rally the country once more.

Public unrest in Cuba is closely linked to the power supply — especially during the torrid summer months — and over the past decade, Cuba has stabilized its electrical grid by installing a series of relatively small fuel-burning power plants. They run partly on Venezuelan crude, and even as oil prices climbed over $100 a barrel in recent months, Cuba has continued to enjoy a reliable energy supply.

Cuba isn’t likely to find a quick alternative to Venezuelan oil, either. The island produces about 50,000 barrels of oil per day from domestic sources, used mostly for generating electricity. Spanish oil consortium Repsol is planning to begin drilling in offshore beds along Cuba’s north coast in the coming months, but even if it has a major strike, experts say it will take years to bring the crude to market.

Then there are hundreds of other commercial and trade agreements with Venezuela that could be jeopardized if the country’s next president isn’t as simpatico. Cubans privately worry those arrangements may be only as healthy as Chavez himself, a man who views Fidel Castro as his political father figure.

Other socialist allies around the region, like Nicaragua’s Daniel Ortega, are also highly reliant on Venezuelan oil diplomacy, along with the 19 nations of the Petrocaribe alliance, whom Chavez buffers from the global oil market’s volatility.

Chavez insists he is fine, and on the path to full recovery. In a written “Reflection” dedicated to Chavez’s illness Monday, Castro said the Venezuelan president had launched “a decisive battle” that “will lead him and his country to a great victory.”

But that victory now depends on the Cuban oncologists tasked with saving Chavez. While the location and stage of his cancer has been kept secret, experts speculate the area of affliction could be Chavez’s colon or prostate. A late-stage form of colon cancer would be extremely dangerous.

Chemotherapy treatments could force Chavez to withdraw from public view again, so his return to Caracas this week may also be a final attempt to put his political team in order before a lengthy absence.