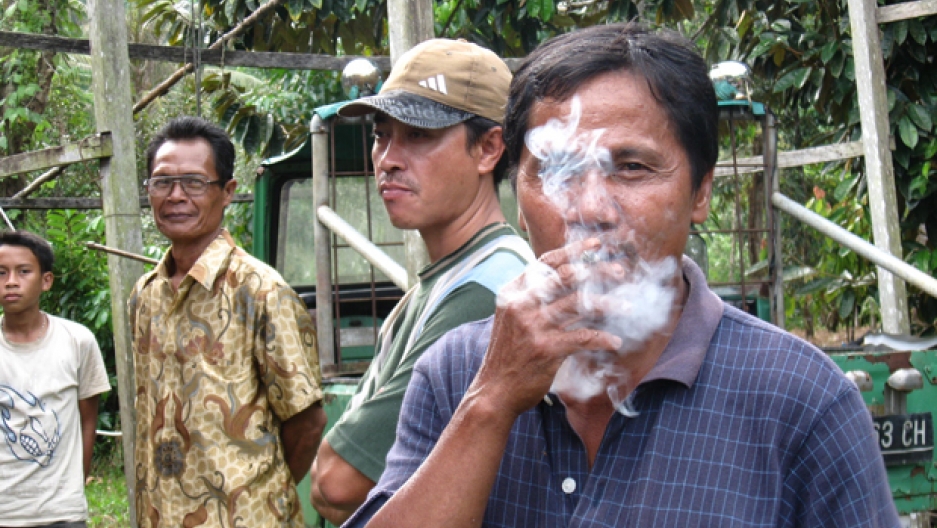 Share
By Sandy Hausman When you step out of the international airport in Jakarta, it seems impossible that this could be Marlboro Country. It's oppressively hot and humid. Traffic is bumper to bumper, and the air is barely breathable — but as you drive into town, you can't miss the message. Half of all billboards in this country promote cigarettes. Flip on the television, and you might catch an ad in which a guy rides his motorcycle to the top of a volcano — or one in which a construction worker — through superhuman stunts — prevents a serious accident. By law, they can't show cigarettes but that's what both are advertising — with brands getting a prominent mention. Concerts and sporting events are often sponsored by tobacco companies, and fans take note. A 2008 report showed 29 percent of Indonesians aged 10 and above smoke an average of 12 cigarettes a day. It's an easy habit to acquire, with cigarettes costing less than a dollar a pack or $0.10 a piece. Indonesia chooses not to impose high taxes on cigarettes — a move that would almost certainly decrease sales. Then, there's the culture. Dr. Yayi Suryo Prabandari, on the public health faculty of Gadja Mada University, says, it's illegal to sell cigarettes to kids under 18, but it happens all the time. Early attempts to pass stricter laws have met with strong opposition. Often, politicians cite the need to protect tobacco farmers and thousands of workers — mostly women — employed to hand roll Indonesia's famed clove-studded smokes, and cigarettes are an important source of tax revenue. There's one other factor working in tobacco's favor. Since 2008, Marcus has worked as a counselor in a central Java clinic that helps people quit smoking. Over those three years he's seen just 114 people. Many people ask Marcus whether there is a medicine to stop smoking. Yayi says there is not and that the makers of nicotine gum and patches see Indonesia as a poor country — not a lucrative market. "Fifteen years ago, they try to sell in Indonesia, but the market is not very good, so they withdraw," Yayi said. On the international front, Indonesia is one of only three countries that refused to ratify the World Health Organization's Framework Convention on Tobacco Control — a document that requires nations to reduce tobacco use. The country does require cigarette packs to carry labels that warn of medical risks — including impotence — and it required photographs of hideous health consequences even before the US.