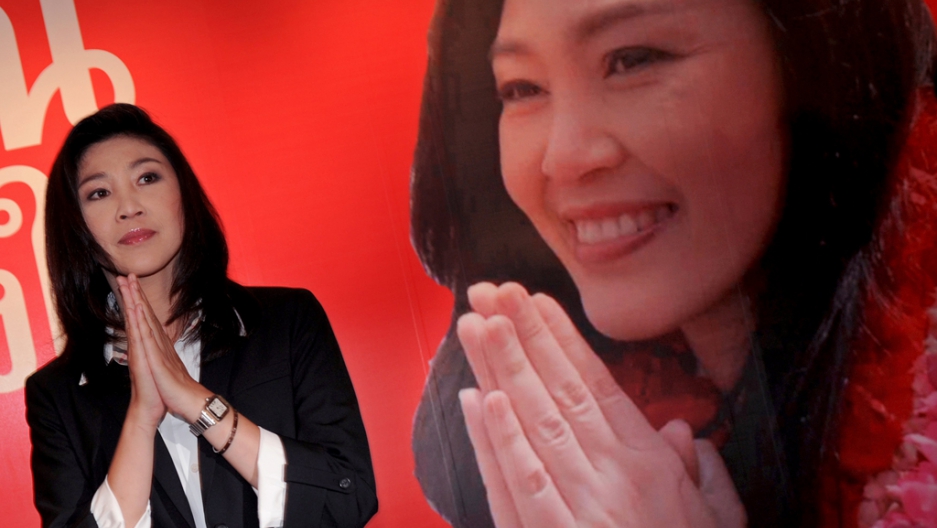 Yingluck Shinawatra, of the opposition Puea Thai party and sister of fugitive Thai ex-prime minister Thaksin Shinawatra, gives a traditional greeting next to a large portrait of herself during a press conference at her party headquarters in Bangkok on July 3, 2011. Puea Thai had won a majority of seats in Parliament, paving the way for Yingluck to be the nation's first female prime minister.
Credit: Pornchai Kittiwongsakul
Share

BANGKOK, Thailand — So what comes next?

That’s the question many people are asking here in Thailand following Sunday’s first general election in five years. The highly anticipated vote saw a party loyal to a fugitive prime minister, Thaksin Shinawatra, take a majority in parliament. His younger sister, Yingluck, a telegenic 44-year-old who is a political novice, is set to be the country’s first female prime minister.

The result is a rejection of the Bangkok establishment, which includes the powerful army that overthrew Thaksin in 2006, the courts that dismissed his subsequently elected allies, and the Oxford-educated prime minister who has now been voted out.

The election came just a year after bloody anti-government protests that marked the Southeast Asian country’s worst political violence in decades. Some 91 people were killed and thousands injured when red-clad supporters, most of them Thaksin backers, rallied in Bangkok.

Ahead of the election, many wondered: Would voters stand by Thaksin and his sister? Or would his opponents be able to muster enough support to keep his party out of office? The answers were: Most definitely yes, and not even close.

So now that the vote is over, and a Thaksin-linked party will be assuming office, what can we expect to follow?

Here are some key issues to consider in the months ahead. Yingluck’s win was significant — but there could be more turbulence to come.

Does the vote mean Thailand’s political crisis is easing?

Far from it. Anger among Red Shirt supporters may have eased now that their party has won. But the anti-Thaksin camp may well hate the former leader more than ever. His critics say he is venal, greedy, megalomaniac, and that he has duped poor, rural voters into voting for him.

In Thailand, powerful people refuse to “accept the voices of the majority,” according to a Thai political analyst who asked not to be named. While not a Thaksin supporter, he says the country’s troubles began when Thaksin was ousted in 2006. Whereas in the United States or elsewhere, “the electorate or supporters of one party would accept the result of the election if another wins,” this is not the case in Thailand.

In an example that illustrates the severity of the situation, he says he has friends who occupy coveted positions in government ministries and the business world — and who support Pheu Thai’s rival, the Democrat party. Rather than accepting that Thaksin’s party has won the election, they are bitter, and argue that the election should be scrapped. They say the votes of Thailand’s poor — many of whom are Thaksin supporters — should not be counted because the people in the countryside are uneducated.

Will there be another coup?

In short, it depends on what Pheu Thai does next. While Yingluck and her party have a political mandate, history shows that coups have been frequent in Thailand: There have been 18 successful or attempted coups since the 1930s.

Such is the anticipation of a potential military move that much of today’s international and domestic media coverage, two days after the election, has featured comments made yesterday by Defense Minister Gen. Prawit Wongsuwon.

“I've said this several times,” he was quoted by Thai media as saying, “We are not going to intervene.” The very fact that a denial is noteworthy demonstrates how commonplace coups are here.

Of course, it’s worth noting that military leaders have made similar statements before Thaksin was overthrown in 2006. “Military coups are a thing of the past,” army chief Sonthi Boonyaratglin told the International Herald Tribune in March 2006. Tanks rolled through the streets six months later.

The message from voters on Sunday was “we don't want a military coup d'etat to change our choice of leaders,” wrote Pichai Chuensuksawadi, editor-in-chief of English-language newspaper The Bangkok Post.

Yingluck has to live up to some lofty promises her party made on the campaign trail. One is to provide tablet PCs for schoolchildren under a program called “one tablet per child.” (The computers wouldn't be iPads, though, but rather cheaper versions that run on the Android operating system.)

The Pheu Thai party has also pledged to guarantee prices for rice farmers, and has vowed to focus on massive infrastructure projects. One of the construction projects involves building a railway from Bangkok’s international airport to the beach resort of Pattaya. Another would involve constructing a land bridge to connect the Andaman Sea to the Gulf of Thailand. As things move forward, Yingluck will likely hope voters understand that, as the adage goes, politicians campaign in poetry and govern in prose.

The extent to which Thaksin is active in everyday governing is another question. He has referred to Yingluck as his “clone,” and some campaign posters featured the Pheu Thai slogan, “Thaksin thinks, Pheu Thai acts.” It will be very much his show, analysts say.

Another challenge for Yingluck will be to keep the disparate elements of her own camp in line. Some of the more strident leaders of the Red Shirts led last year's protests, and some see them as responsible for the arson attacks on key Bangkok buildings that came at the end of the demonstrations. They may seek official roles in the new government. Some of these individuals are seen as ideologues, and the military and others might not countenance them assuming positions of power.

Will it still be safe to travel to Thailand?

Thailand’s tourism industry is remarkably resilient. It bounced back from SARS, the 2004 Indian Ocean tsunami, the 2006 coup, and last year’s street violence. In 2010, in fact, more than 10 million people visited Thailand, up from 2009 numbers. The figures for this year are looking good, and the Tourism Authority of Thailand announced recently that it would target 19 million visitors next year.

Tourists might wonder, though, whether it’s safe to visit Thailand if there’s a military coup or renewed demonstrations. Fortunately, travelers are likely to face very little physical danger, as protesters have never targeted tourists. And the last 2006 military coup was bloodless.

Still, demonstrations in 2008 shut down Bangkok’s international airport, stranding thousands of tourists. But last year, the protests were confined to specific areas of the sprawling city, so many tourists simply steered clear of the protest zones. Ultimately, though, it’s best to follow the news and check with people on the ground in the part of the country you’re planning to visit.

Will the business community suffer any fallout?

The Pheu Thai party has made one campaign promise that, perhaps more than any other, has caught the attention of those who run both foreign and domestic companies here: a pledge to raise the minimum wage approximately 40 percent, to roughly $10. This could damage Thailand’s cost advantage and make it more expensive for companies like Ford, Coca-Cola, Dow, and others to do business here.

Chairman of the Joint Foreign Chambers of Commerce in Thailand, Nandor von der Luehe, notes that a wage hike would not necessarily be a bad thing, so long as Thai workers become more productive. He worries that workers’ efficiency here is lower than in other Asian countries, and companies could be squeezed with higher labor costs without an accompanying rise in output.

Meanwhile, Peter Eliot, president of The American Chamber of Commerce in Thailand, told GlobalPost in a statement that, “In general, American companies pay higher than the standard minimum wage” and help with workers' vocational training. But he says the group encourages the Thai government to consider ways to “offset wage inflation” and ensure Thailand’s competitiveness.

How will U.S.-Thailand relations be affected?

Thailand is an important American military ally, and Washington and Bangkok have crucial trade links. The two countries also cooperate on anti-terrorism activities, as well as law enforcement matters. For example, last year Thai authorities allowed the extradition to the United States of an alleged international arms dealer, Russian Viktor Bout, who was nabbed in Bangkok. The United States also wants to keep Thailand on its side since China is making in-roads in Southeast Asia.

Officials at the U.S. embassy in Bangkok have said they look forward to working with Thailand’s new government, but some argue that the United States should take a harder line if Thailand launches another military coup.

“Unlike in 2006, the U.S. cannot this time even tacitly tolerate a coup,” wrote Joshua Kurlantzick, of the Council on Foreign Relations. A military intervention should mean the halting of U.S.-Thailand military exercises, and “should result in the kind of harsh condemnation of the military’s actions that the U.S. would deliver in the case of nearly any other country.”