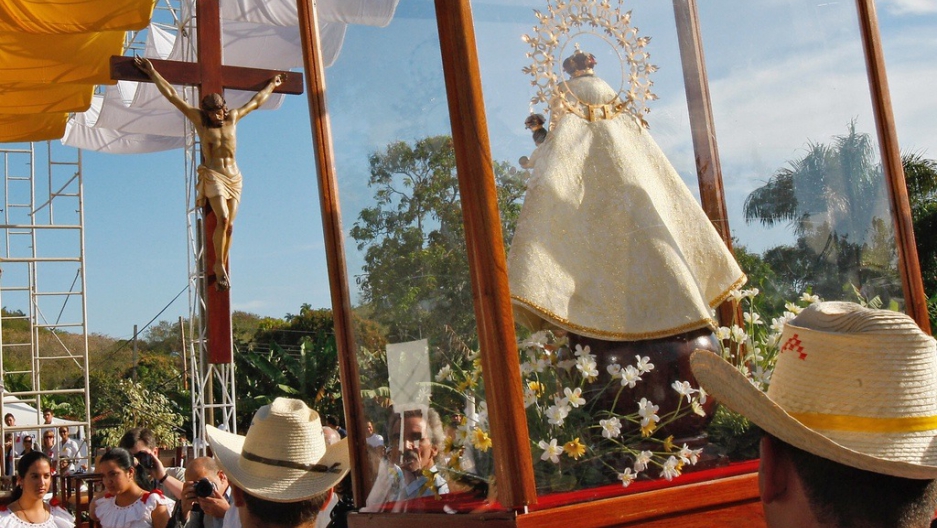 Cubans during a mass in Santa Clara on Feb. 23, 2008.
Credit: Adalberto Roque
Share

HAVANA, Cuba — When leading Cuban writers and intellectuals want to circulate their views in a journal with a serious readership on the island these days, they turn to an unlikely publisher: the Catholic Church.

Church dioceses around the world have publications and newsletters, of course, often engaging with the pressing topics of the day. But in Cuba, where the newsprint and airwaves are the sole dominion of the state, church-run magazines have become a critical forum for debates on the country’s earthly problems — its faltering economic model, or the deep political divisions between Miami and Havana.

The most important venue to emerge in recent years is the magazine and website Espacio Laical (Secular Space). Each issue typically contains several items of spiritual and other ecclesiastical interest, but most of its pages are increasingly devoted to economic, social and political topics.

Recent editions have featured columns urging broader internet access, deeper economic reforms and a path to reconciliation between Cubans on the island and Cubans abroad. Another issue published an extensive interview with Cuban economist Pavel Vidal, who, like most Cuban scholars, is effectively barred by the government from speaking to foreign reporters — but not a Cuban publication like Espacio Laical.

The magazine is one of the few Cuban journals that regularly prints articles by foreigners or Cuban exiles, creating a rare place where Cubans scholars who have left the island can still reach Cuban audiences in print.

One contributor, Marifeli Perez-Stable, is a columnist for the Miami Herald, and the magazine also recently ran an essay by Peruvian Nobel laureate Mario Vargas Llosa, a long-time Castro critic routinely disparaged in Cuba’s official media.

“Our mission is to facilitate dialogue,” said Roberto Veiga, Espacio Laical’s editor. “It doesn’t matter if contributors lean toward one side of the political spectrum or the other,” he said.

Veiga said the magazine is trying to appeal to Cubans everywhere, Catholic or secular, regardless of where they live. “We publish Cubans here on the island and Cubans who live abroad — it doesn’t matter,” he said. “As long as they contribute in a spirit of dialogue and reconciliation, and are looking to find consensus.”

“The idea is to bring the church closer to society, and to provide a place where Catholics — and non-Catholics — can discuss the issues that affect their daily lives but that often go missing in the official state media,” said Marquez, who is also the spokesman for the Havana Archdiocese.

The magazines do not explicitly challenge the Castro government or Cuba’s leaders. Their articles are not polemical or overtly partisan, leading critics abroad or among Cuba’s dissident movement to see them as excessively timid or accommodating to authorities.

According to a report last week in the Miami Herald, a 2007 U.S. diplomatic cable released by Wikileaks claimed that Cuban Cardinal Jaime Ortega had moved to stifle another, more critical church magazine, Vitrales, bowing to pressure from the Cuban government. The cable, written by a mid-level State Department official, cited unnamed monsignors at the Vatican who worked on Cuba issues.

The Herald, which had access to the secret cable, reports Vatican officials complained to U.S. diplomats that Cardinal Ortega, the island’s top church figure, was too friendly with Raul Castro.

In an interview, church spokesman Marquez rejected those claims, insisting that while the Cuban government has objected to some content in church publications, it has not pressured Ortega or other church leaders to shut them down. “They’ve never asked us to close a magazine,” he said.

Next month’s issue of Palabra Nueva carries an account, written by Marquez, of the church’s role in helping to free more than 100 jailed activists from Cuban prisons last year, written partly in response to the allegations that Cardinal Ortega facilitated a program of “forced exile” that resulted in most of the dissidents leaving for Spain.

But dissidents and their families have acknowledged in recent weeks that they were not forced to leave. In fact, many of the best-known prisoners and more vigorous Castro critics — such as Oscar Elias Biscet, or Hector Maseda, husband of Ladies in White leader Laura Pollan — chose to remain on the island once released from jail.

“Now, or in the near future, the country needs to create a space in which different opinions, interests, and criteria can come together and merge into a common cause, and one that isn’t tied to foreign interests,” Marquez writes in his essay, outlining a vision of Cuba that sounds not unlike the stated mission of the church’s publications.

“In that case, perhaps, there wouldn’t be a need for the Church to mediate, because we’d have a new society that seeks, through frank and responsible dialogue, to become a strong and prosperous society for all,” he continues. “That conversation has not begun, nor is it visible on the horizon, but it should be.”