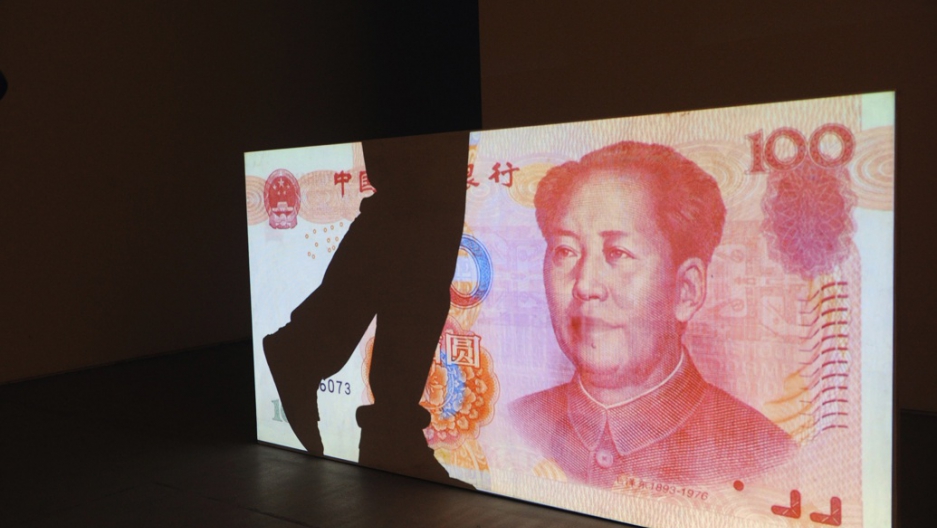 The shadow of a visitor falls on a huge 100 Yuan note on display at an art exhibiton in 798 art factory in Beijing on April 15, 2010.
Credit: Franko Lee
Share

The Great Wall of Debt?

That's the word out of China this morning, according to ratings agency Moody's.

Local government debt could be 3.5 trillion renminbi ($540 billion) larger than first thought, a troubling number that could expose Chinese banks to deeper losses that could eventually threaten their credit ratings, Moody's says.

It points to Bank of China and China Citic Bank as two banks that pursued particularly aggressive lending strategies in 2009, when Chinese banks went on a lending tear.

“Banks’ exposure to local government borrowers is greater than we anticipated,” Yvonne Zhang, a Moody’s analyst, said in a statement published by Reuters.

Slower economic growth in the world’s second-largest economy could trigger a round of loan defaults, hobbling China's banking system and unnerving global markets and, of course, adding more problems to the fragile global economy.

Moody's is urging Beijing to come up with a "clear master plan" to fix the problem.

This isn't the first warning about China's banking system.

As reported by GlobalPost's David Case back in January, Fitch Ratings late last year issued a troubling report on the sector.

Here's how Case put it:

Experts are warning that China’s red-hot economy is catching a contagion of its own. The country is increasingly awash in runaway loans, a development that could have serious implications for China and the global economy.

The situation has become so precarious that Fitch Ratings, a global credit analysis firm, issued a report last month revealing a litany of messy banking practices associated with aggressive Chinese loan making. The report stated that these practices — involving transferring loans off of banks’ books — constitute “the most disconcerting trend Fitch has observed in China’s banking sector in recent years.”

The problem is complicated by China's socialist-market approach to tweaking its economy.

Instead of using interest rates as the brake and gas pedal of economic growth, Beijing regulates its economy by upping or decreasing the amount of loans that banks can issue.

That's fine when it works. But it's also a risky strategy, particularly when transparency is difficult to come by, as is often the case in China.

So, clearly, the situation bears close watching as both Moody's and Fitch indicate.