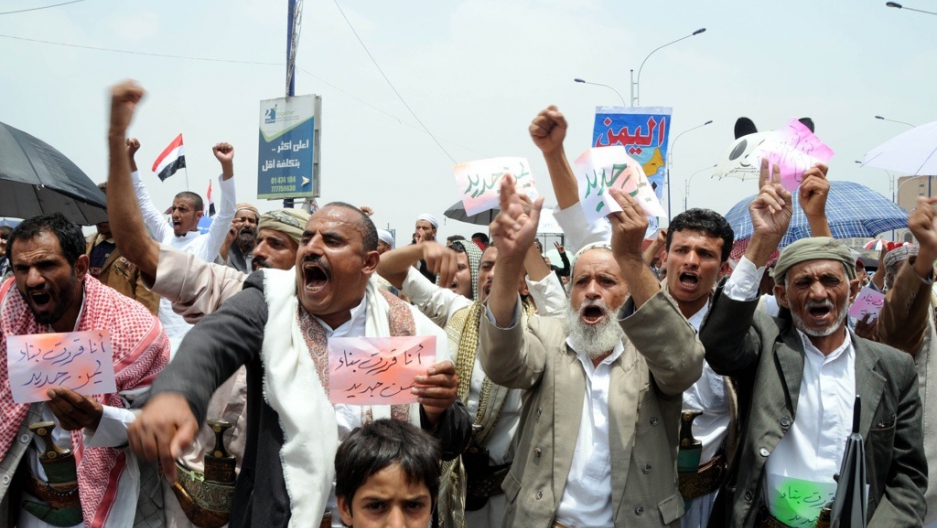 SANAA, Yemen — Yemen’s young people, who began holding anti-government protests outside of Sanaa University five months ago, have lost control of the cause they started.

A consortium of political parties — which, although have for years stood in opposition to President Ali Abdullah Saleh, still represent for most Yemenis a corrupt government system — have effectively hijacked the protest movement.

In the tent city where it all began, now known as Change Square, it is entrenched politicians belonging to the so-called Joint Meetings Parties (JMP), a fragile coalition of opposition groups that includes Islamists, Nasserites and Cold War-era socialists, who have taken control of the stage and the microphone.

(GlobalPost in Sanaa: US says it will step up drone attacks in southern Yemen)

Pushed to the edge of the protest camp, many of the independent youth now feel as though they must fight two fights. One against the JMP, which they say has co-opted their revolution, and the other against Saleh — a fight that began in earnest shortly after Egyptians successfully forced their leader, Hosni Mubarak, out of office in February.

Visibly exhausted, many of them are still recovering from gunshot wounds and other injuries they sustained on their last march on May 11 — almost two months ago — when they were assaulted by sniper fire. Since then they’ve only managed to hold a single march, to the home of Saleh’s deputy and acting president, Abd Rabbu Mansur Hadi.

“The JMP blocks the independent youth from marching 100 percent of the time,” said Dr. Hamza Alshargabi, a member of the Coordinating Council for the Youth Revolution of Change, or CCYRC.

In a worrying development for the independent protesters, soldiers who had defected to protect the demonstrators from any further government attacks, turned on the youth as they staged a sit-in in front of Hadi’s house, forcing them back within the borders of Change Square in early June.

“The worst thing the JMP has done is turned the defected 1st Armored Division against us,” Alshargabi said.

The JMP coalition’s most powerful political party, Islah, is now largely in control of Change Square’s day to day activities, which are being funded by Hamid Al-Ahmar, a billionaire businessman, tribal leader and leading Islah party figure.

The Islah party, for instance, is paying to feed the thousands of protesters still living in Change Square. Restaurants surrounding the square have been converted into industrial-sized kitchens with enormous vats of beans, rice and vegetable stew distributed to protesters on a daily basis, all of it funded by Islah.

(GlobalPost in Sanaa: Yemen plagued by shortages of food, electricity and fuel)

“The one thing we don’t have is bread. There is no diesel for trucks to bring us wheat and grain. However, with our funding, we have enough beans and rice to feed protesters,” said Ibrahim Al-Aghbas, an Islah member who is managing food distribution.

“Without this food, people would simply have to stop protesting,” he added.

Youth organizers, however, said that the emergence of the JMP and, in particular, the Islah party, is only a temporary setback. Youth leaders said they planned to to retake control and begin again their plan to escalate protests, marches, strikes and general civil disobedience that began last May but was derailed when violent clashes between security forces and opposition tribesmen broke out across the capital.

Those clashes culminated with an attack on the presidential palace that injured Saleh, forcing the president to flee to Saudi Arabia, where he remains. In his wake he left a power vacuum that has now lingered dangerously for several weeks.

The goals of the youth protesters, who want a whole new government system and for Saleh to be charged with crimes, don't match the goals of the long-standing political opposition, which consists of lawmakers and other politicians that most of the country has long viewed as ineffectual and often corrupt.

According to some protesters, JMP members simply want to wait for a new government to be formed — even if that happens on the terms of the international community and the current administration — so they can take part in Yemen’s new political make up, an option much easier than continually marching and being attacked by the state security apparatus as youth protesters have done for months prior to the shift of power in Change Square.

“We’ve learned from our mistakes and more and more youth are beginning to organize under the same banner instead of the hundreds of different groups we had before,” Alshargabi said.

Without the ability to march outside of the square, however, independent youth protesters are beginning to focus their efforts inward, marching inside the square to demand that the JMP get out of their way so that they can complete the movement they began.

“The CCYRC is respected and we’ve set an example for how this revolution should be conducted. People see this and are beginning to rejoin the independent movement,” Alshargabi said.